Few people have impacted the horror genre like George A. Romero. Much of today’s zombie craze can be attributed to Romero’s work in Night of the Living Dead and other related films. He also wrote and directed The Crazies and Monkey Shines, directed Creepshow, and was a contributing producer of the Tales from the Darkside television series.

If you have never seen the original Night of the Living Dead from 1968, block off some time to watch it today.

Tags: George A. Romero, Night Of The Living Dead, zombies

Spooky Songs: “I Walked With A Zombie” by Wednesday 13

Horror punk is a niche genre to be sure, and Wednesday 13 is easily the best artist within the genre. With each album, Wednesday 13 and his ghastly group matures in morbidity. “I Walked With A Zombie” comes from the 2005 album, Transylvania 90210: Songs of Death, Dying, and the Dead. 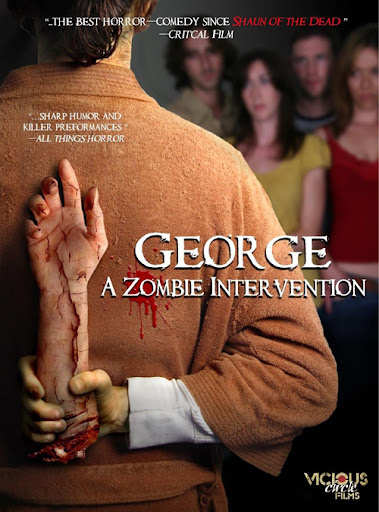 Low-budget horror comes in many varieties, but it seems almost all contain some element of comedy. George: A Zombie Intervention is certainly not afraid to go for laughs; this is a dark comedy about a group of friends trying to help their flesh-eating buddy. The movie is another take on the monster which has exploded in popularity over the past few years, and a welcome addition to the world of “zomcoms” (zombie comedies).

The dialogue is generally well-written, though much of the profanity was unnecessary and distracted from the story. The gore, on the other hand, was perfectly measured throughout. As with most B-movies, the camp factor is off the charts, which just adds to the entertainment value. One of the best scenes comes as George is eating the leg of his latest victim, and the victim wakes up to discover he has become a zombie as well.

Whether you are new to the zombie genre thanks to “The Walking Dead,” or you have been a fan since the days of Dr. Caligari, the encyclopedic Zombies A-Z is a great addition to your bookshelf. There is no introduction; the author Dan Oliver simply unleashes a barrage of information about zombie films and television programs, as well as important people such as George A. Romero and Bruce Campbell. Of course, the popular titles like Night of the Living Dead and White Zombie are covered, but there are independent projects, foreign films and cult classics also included: The Boneyard, Flight of the Living Dead: Outbreak on a Plane and Junk to name just a few.

Tidbits are inserted throughout in the form of “Did You Know?” facts. For instance, “Before Will Smith signed up to play Robert, Tom Cruise, Mel Gibson and Michael Douglas were considered for [I Am Legend].”

Another feature of the book is “Movie Mistakes,” highlighting continuity issues in a handful of the films: disappearing bullet holes, other wounds healing from one scene to the next, and the accidental presence of camera equipment in scenes.

There are no instructions on how to prepare for the coming zompocalypse, but if you love watching movies related to “the living dead,” grab a copy of Zombies A-Z and start updating your Netflix queue!

Learn more about John Blake, an imprint of Metro Blake.

The Zombie Doodle Diaries by Simon Bailey and Andrew Li (2012)

I remember well the activity books from my youth. My favorites came from Hanna Barbara, either The Flintstones or Scooby Doo (I couldn’t decide then, and I still can’t today). But we didn’t have horror-themed activity books back then as far as I was aware. In a sense, The Zombie Doodle Diaries fills a void, especially in this “Walking Dead” crazed society.

A wide range of activities will keep the most restless youngster busy in the backseat of the car on a long trip…word finds, crosswords, mazes, and more. “Spot The Difference” puzzles are some of my favorites, and this book provides five of those. And there are plenty of pages to practice your zombie-drawing skills, and I would love to see what Billy Tackett could come up with on some of these pages.

Some activities do not work quite as well as others. The recipes are a bit off-beat and do not look very appetizing, and the underwear doodle pages are out of place. Overall, though, it is a fun book that provides time-killing activities for young horror fiends. Amazon recommends the book for ages 12 and up.

It would probably take you longer to read a proper review of the short film Too Late than to actually watch it, because it is less than two minutes long. Published on Vimeo by Side Films, it’s an interesting take on zombification with a surprising twist at the end.

Zombies are big…even in New Zealand. A zomcom along the lines of Zombieland and Shaun of the Dead, Last of the Living follows three slackers that are thrust into the role of saviors. When they meet a female scientist named Stef who has the blood sample needed to find a cure, they must help her get to an island where scientists are waiting for that last piece of the puzzle.

My favorite character in this film was Ash (played by Ashleigh Southam), playing the lovable loser who longs for the affection of Stef (Emily Paddon-Brown), but must compete with his self-centered friend Morgan (Morgan Williams). Rounding out the group is Johnny (Robert Faith), a rocker at heart who continues to practice his drumming, even though all his bandmates were zombified long ago.

If you like movies with a happy ending, this isn’t for you. But if you like low-budget zombie flicks with a little bit of dark humor, and you can overlook budget restraints, check out Last of the Living.

I will say this, for an independent movie, it has one of the greatest theme songs ever (and several of the other songs in the movie are pretty cool, too). Presenting “Last of the Living” by The Frank Woo…

And the trailer for the film…

Congratulations are in order to the Texas Rangers for making the World Series this year. I suppose the same should be said for the St. Louis Cardinals, even though they shouldn’t have been in the playoffs to begin with.

Has the Wild Card team ever had homefield advantage in the World Series? Bud Selig, you’re such a misunderstood genius.

A couple of years ago, I made a post of zombiefied players from the Phillies and Yankees, who would be facing off in the World Series. I thought I would bring back that theme after watching the killer season 2 premiere of “The Walking Dead” on AMC. What a fantastic show. If you haven’t seen it, check out season 1 (only six episodes, streaming on Netflix now) and find a find a friend who DVR’d the season 2 premiere before next Sunday night.

Here is Josh Hamilton and Albert Pujols, representing the Texas Braingers and the St. Louis Cannibals… 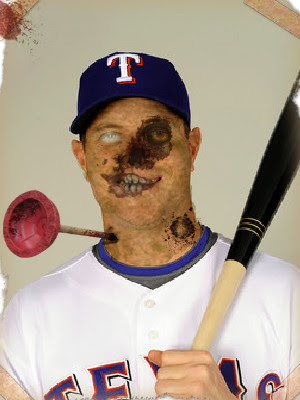 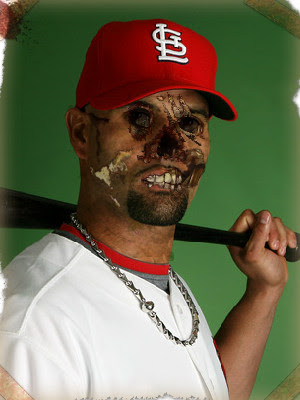 Want to play around with your own zombifications? Zombieland is your one-stop site for all things reanimated.

“The Walking Dead”…is @Netflix streaming it or not?

I subscribe to an RSS feed of new titles to watch instantly on Netflix. A few days ago, “The Walking Dead,” a great zombie series on AMC, popped up on the feed. I clicked over to Netflix to add the show to my queue…and it says it’s not available. Usually it takes a few hours for a program to actually become “queueable,” so I checked back later. And again later. And again later. It’s still not available.

Season 2 starts in less than two weeks, and I would love to refresh myself on season 1 before starting it. I really hope it becomes available for streaming before then.

Christmas is so close, but the zombies are closer!

An informational, educational video…just in case the undead show up on Saturday.