Former Washington Senators infielder and father of one of my favorite baseball players, Ron Stillwell passed away from cancer on Monday. He played 14 games over two seasons, 1961-1962, collecting eight hits in 38 at-bats. His son, Kurt Stillwell, played nine years in the big leagues.

“This is utopia for me. This is the topper, something I’ll never forget. I’ll take this to my grave.”

Frank Howard spoke those words on September 30, 1971, following the final game played at RFK Stadium in Washington, in which he received several standing ovations and hit the last home run in Senators history. The franchise moved to Texas after the 1971 season.

The Senators were winning their final game 7-5 when fans rushed the field in the ninth inning, causing a forfeited loss to the Yankees. The statistics for the game stood, however, including Frank Howard’s 237th home run for the team. After rounding the bases, the fans refused to settle down, forcing Hondo to come back out of the dugout and throw his helmet and a kiss to the fans.

When asked if Howard was given an easy pitch to hit, Yankees manager Ralph Houk said, “I may be a nice guy, but not that nice.” He then smiled and admitted, “But I’m glad Howard hit it.”

Howard, whose nicknames included “The Washington Monument” and “The Capital Punisher,” was obviously touched by the fans’ gestures that day. “Everything that happens after this is anticlimatic. Everything is downhill after this. I’m not a sentimental guy, but I’m sentimental about this.”

When is the last time this guy appeared in a baseball card set?

The 2015 TWJ pre-season baseball card set is coming January 1. Be sure to watch TWJ cards on tumblr for a new card or two every day between the first of the year and the first of the season. Retired stars, Hall of Famers, and a handful of current players will be featured in a three-month frenzy of virtual “fun cards!”

An infielder for the Dodgers, Cubs, Senators, Mets, Reds and Toei Flyers in the 1950s and 1960s, Don Zimmer passed away Wednesday at the age of 83. Zimmer also managed for several years and led the Chicago Cubs to a 1st place finish in 1989.

It is no secret that I am a huge Kurt Stillwell fan. I have collected a good number of Stillwell’s cards from his career, and have even received a few autographs from friends. One card that I have not yet secured is his dad’s, Ron Stillwell. Ron only played a handful of games for the Washington Senators in the 1960s and was never included in the Topps sets of the day. In 1983 a baseball card set called “One Year Winners” was produced, and that is the card used for the father half below. I found the scan on Baseball Almanac. The Kurt Stillwell photo is from the 1987 Indiana Blue Sox “New Reds Machine” card set. 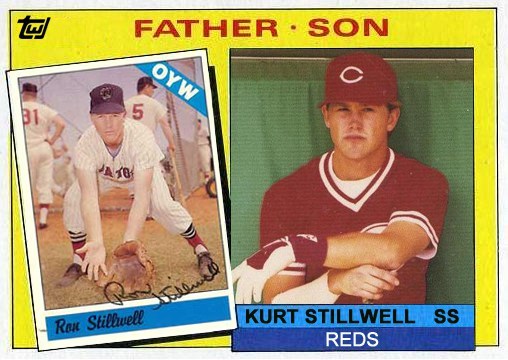 What’s cooler than being cool?

Ice cold. And dayf is the definition of ice cold.

Way back in March, I unlocked my first and only toppsmillion.com code. It was a beautiful 1987 Topps Jeff Stone card. I decided that I wanted to turn that card into a 1952 card…any 1952 card. Slowly but surely, I have traded my way back to 1963, but haven’t had any nibbles for a few months. So here’s your chance to help me out in my ’52 Challenge…help me go back in time a few years.

Make an offer for a 1963 Marv Breeding card on toppsmillion.com…any card older than 1963…then leave me a comment here and I will go approve the trade.

The Countdown to ’52 Challenge…I NEED HELP!!!

…and he wants to find a better home.

And I want to find an older card.

I started with a 1987 Jeff Stone card back in March, which became a 1986 Rob Picciolo. That card was soon traded for a 1985 John Franco, which was flipped for a 1976 Cliff Johnson, which gave way to a 1973 Roger Metzger, which surrendered to a 1966 Ralph Terry, which was quickly traded for this 1963 Marv Breeding card.

And I’ve been stuck with Marv ever since.

The goal is to get all the way back to 1952, and I don’t want to stop short. I passed up an offer in June for a 1964 Marty Keough of the Reds because that would be backtracking, even though I love my Redlegs!

So help me out, make me an offer on toppmillion.com I can’t refuse…any pre-1963 card for this Marv Breeding. Be sure to leave a comment here so I know the trade is waiting and I can approve it!

Some time ago, I decided I would try to make my 1987 Topps Jeff Stone card a 1952 Topps card of any player. Through five trades, I have made it back to 1952, but got stuck on a 1963 Marv Breeding. Since then, the trade offers have kept coming, but none were for pre-63 cards. All offers have been declined, but today I had one that has been difficult to decide upon…

Everyone knows my favorite team is the Reds when it comes to baseball cards. I don’t have this 1964 Marty Keough card. But, 1964 comes after 1963. Should I continue working backwards to 1952, or accept this trade and call it a day?