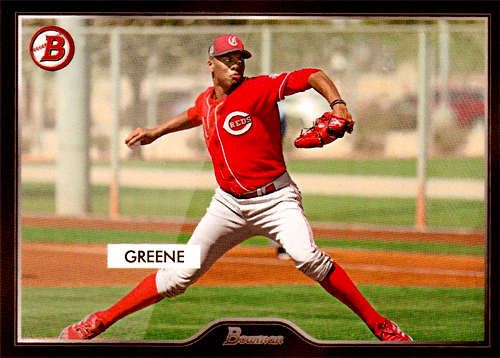 Pictured above is a Hunter Greene card from the 2019 Topps On Demand “Inspired by ’55 Bowman” set. Thus far, Topps has issued ten sets under the On Demand label this year. Not all of the sets feature baseball cards; there are some soccer, some Star Wars, some wrestling, and some Garbage Pail Kids so far. Checklists for all sets can be viewed on Cardboard Connection, but here is a quick rundown of what has been featured so far:

It’s a nice variety, and not overly difficult to keep up with, right? But add in Topps Now, Road to Opening Day, Future Award Winners, Future World Series, Moment of the Week, Living Set for baseball and soccer, apparently a new Star Wars Living Set, 150 Years of Baseball, the revival of Topps Total, Star Wars Galactic Moments, Garbage Pail Kids, Bryce Harper‘s 220, Ginter X, Brooklyn Collection…and I’m sure I’m leaving a few others out. Those are only the online releases. It’s enough to make your head explode like an Adam Bomb.

It’s no wonder that the card backs for most of these sets are only half-done. They don’t have time to make a proper card back! 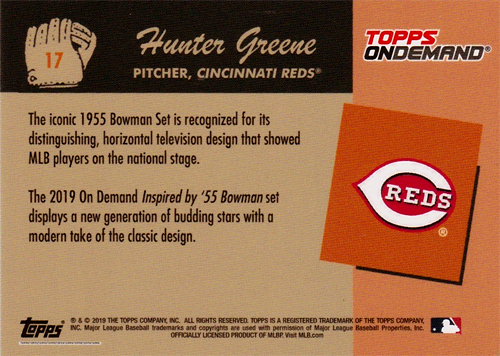 I still pick-and-choose when it comes to the online exclusives. I don’t have to have everything that is released. A few weeks ago, @WatchTheBreaks posted a $3 coupon code for eBay on Twitter, and the Hunter Greene card was only $3.99 with free shipping. I’m cool with dropping a dollar on an online exclusive that fits into the Reds focus of my collection.

Now if I could just find another coupon code to score the Nick Senzel Rookie Progressions on the cheap.