END_OF_DOCUMENT_TOKEN_TO_BE_REPLACED

Two Hall of Fame managers, three Hall of Fame players, and one of Houston’s first star players make up the retired #24’s in the majors.

Herzog, whose full name is Dorrel Norman Elvert Herzog, led the Cards to the World Series title in 1982 and NL Pennants in 1985 and 1987. He finished with a .530 winning percentage for the Cardinals from 1980 to 1990. He was named NL Manager of the Year in 1985, edging out Pete Rose by one point, and finished 3rd for the award in 1987 behind Montreal’s Buck Rodgers and the Giants’ Roger Craig.

I recently sent a few cards to Lifetime Topps, some to help out with his set-building conquests and a few Reds just because. He returned the favor with a nice package featuring a Hall of Famer (Tony Perez), a future Cooperstown resident (Barry Larkin), and some other current and former Reds. Here are just a few of the goodies he sent:

All of those cards are great, but my favorite card in the package, hands-down, was this 1984 O-Pee-Chee Dave Parker:

I miss the Cobra and his 20-minute home run trot.

Thanks for the cards Chuck! 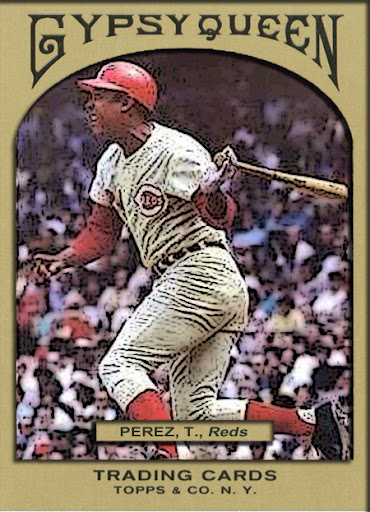 Hall of Famer Tony Perez…it took him long enough to receive that honor. He was denied for eight years, but always had at least 50% of the vote. Finally in the year 2000, the BBWAA saw fit to put Perez where he belonged, alongside teammates Johnny Bench and Joe Morgan in Cooperstown.

You can only go back in time so far…

I once read that if a time machine was ever invented, you could only use it to go back so far. You could not go back further than the date when the materials you used to create the machine were created. Makes sense to a point…but it kind of takes some of the fun out of science fiction. You can only go back in time so far.

The same is true with the Topps Million Card Giveaway, evidently. You can only go back in time so far.

The thing is, I don’t want this card. Had I gotten back to the 50’s, I probably would have had whatever the card was delivered to me. But I think that dream is over.

So if you want to help out, leave a comment and offer up a trade for my 1963 Marv Breeding.

The Hall of Fame yesterday announced the candidates for the Veteran’s Committee. This year all the candidates will come from the “expansion era,” defined as 1973-present. The names on the ballot

Growing up, three of these guys were in my “future Hall of Famer” shoebox of baseball cards: Concepcion, Garvey, and John. I would not be opposed to the induction of any of these candidates, though, as I am a “large Hall” type of guy. #1 on my list, as a Reds fan, is obviously Concepcion, and he has a pretty good shot this year. Two former teammates, Johnny Bench and Tony Perez, are on the 16-man committee, and they may be able to sway a few votes his way. Will they be able to convince ten other guys to vote for him? Hard to say, but he may have the best shot of any of the players on the ballot.

I got a package from Marie of A Cardboard Problem several days ago, but I’ve been working so much I haven’t had time to scan the cards and post them. In all there were 30 Cincinnati Reds cards, mostly from 2010. A few of my favorites are posted below…

I have another one scanned, but I let some guy scribble all over it. I’ll post it tomorrow.

Thanks for the cards, Marie…I’ll be looking around for some cards for you very soon!

It took Perez several years to be recognized by the BBWAA, and in 2000 he barely squeaked by with 77.2% to get inducted into the Hall of Fame. Seven times an All-Star, four times a top-ten finisher in MVP voting, many thought that his election to the Hall was undeserved. He didn’t have the “magic numbers” in hits or home runs, and his career batting average was only .279. He is ninth on the all-time list of most strikeouts…but that’s not a good thing for a hitter. Hmmm. How about eighteenth in most double plays grounded into? Wait, no. That’s not good either.

I’m trying to defend his credentials. I really am. I remember how excited I was when he finally gained election, but I was influenced by the Cincinnati media as a youngster into believing that he really deserved it. How about this:

During the decade of the 1970s, Pérez was second among all major-leaguers in RBI, with 954, behind only his teammate Johnny Bench.

Now that is impressive, to have the top two RBI men in a decade to come from the same team. That means their teammates did a pretty terrific job of getting on base, and Bench and Perez did a pretty terrific job of driving them home. Perez’s 1652 RBI is good for 27th all-time, which is not too shabby. That’s more than Brett, Schmidt, McCovey, Stargell, and even the great Mickey Mantle. The only non-Hall of Famers ahead of Perez on that list are not eligible for induction yet (and really only two should ever be inducted [Griffey and Thomas], as the rest are stinkin’ cheaters).

Okay, I think I have convinced myself. Maybe I haven’t convinced you. But I’ve eased my conscious about Perez’s inclusion among baseball’s immortals.

Does anyone know anything about these things? I happened upon an eBay auction for a box full of National League balls for $699.99. (No, I didn’t buy them.) Several single balls are also listed for around $60 each. Are they really worth that much? All I really know about them is that they are listed in that one hobby magazine as “1970 Chemtoy Superball.” The same guy that is offering the Tony Perez (pictured below) says he has the complete Reds set and is going to list it for $350. Maybe it’s just me, but that seems insane.

I saw this on eBay the other day, and probably should have bid on it. It ended up selling for just 99 cents, plus $3 shipping, so about a dollar a card. The four cards in the set are Cincinnati legends who will never be forgotten: Pete Rose, Tony Perez, Tom Seaver and Alexis Oliveras.

I’m glad I now know there are minor league cards in this set. I won’t be buying any packs. I’ll just pick up some singles here and there, but I don’t want to waste my time with minor league players who I’ll never hear about again.