I love the Cincinnati Reds, but even more than that, I love baseball. Rookie Walker Buehler pitched six hitless innings for the Los Angeles Dodgers in Monterrey, Mexico, Friday night. Tony Cingrani, Yimi Garcia, and Adam Liberatore followed, each pitching an inning of no-hit ball against the San Diego Padres to complete the first combined no-hitter in Dodgers history. What a night, but in the States, another historic moment occurred… I recently sent a few Pirates cards over to Bob Walk the Plank, and he responded with some awesome Reds certified autographs. Mike Leake (who now wears a Cardinals uniform) Chris Denorfia (who was released last week after spending the spring with the Yankees), and Tony Cingrani (who is actually still a Red). I did not have any of these cards already, so they are definitely appreciated! Thank you Matt! This guy showed so much promise in 2013 as a rookie. Starting 18 games, Tony Cingrani compliled a 7-4 record with a 2.92 ERA, just two years after being drafted in the third round out of Rice University in Houston. Last year, though, the wheels fell off, and he hasn’t been able to fix it yet. What’s the difference? Could it be that Bryan Price was a greater asset to the Reds as a pitching coach than he is as a manager? Considering that the bullpen has been a travesty the past two years since Price was promoted to skipper, I think there is some merit to that. Price was a great pitching coach, and when his tenure as Reds manager mercifully ends, I hope he is able to latch on somewhere else in that position. He is simply in over his head, and has no clue what he is doing as a manager.

Back to Cingrani, he has shown some promise down in Louisville, and I expect him to be wearing a Reds uniform again before the season is through. In 22 innings, he has a 2.05 ERA. I hope when he returns to the bigs he is able to keep that ERA down and be an effective pitcher, whether he starts or comes out of the bullpen.

Is this guy getting any attention around the league? In 28 innings, Tony Cingrani has struck out 37 batters and boasts a 2-0 record with a 2.89 ERA. Not bad for a rookie, huh?

As I was searching for images to use on the card, I came across a couple of other very nicely done customs at the RedsZone forums. A user with the screenname “fordman” posted a 1987 Topps with an All-Star Rookie trophy and a 1981 Topps Prospects card with Billy Hamilton and Derrick Robinson. He has created several other awesome “replica” custom cards…you just have to search through the RedsZone forum to find them!

It’s devastating to a team to lose the ace of the staff, especially so early in the season. When Johnny Cueto was placed on the disabled list, the city of Cincinnati was punched in the gut. But young gun Tony Cingrani stepped up to the challenge and handled the Miami Marlins in his first big league start, striking out eight batters in five innings en route to his first victory. He pitched well against the Cubs in his next start, striking out nine in seven innings.

The way he has been pitching, Dusty Baker will have some hard decisions to make when Cueto is ready to resume his role at the top of the rotation. Does Cingrani go back to Louisville for more seasoning, or does Mike Leake go to the bullpen?

This “fun card” was brought to you by TWJ contributor Patrick. Excellent job as always. Cingrani was previously featured in the 2011 Reds (’92 Style) “fun card” series.

I haven’t bought a pack of 2013 Topps yet, and probably won’t (unless my willpower goes kaput all of a sudden). Since I collect almost only Reds cards now, buying packs and blasters just doesn’t make financial sense to me. I would rather spend $3-5 for the team set on eBay than $20 for packs, of which I might find 3 or 4 cards that I like (including non-Reds).

Thanks to awesome bloggers like Crackin Wax, I am still able to obtain new cards without buying new packs. If you go to his site and click on “Take My Cards” across the top, you will be directed to a password-protected page of cards that he is giving away for free…all you have to do is provide a SASE!

When he posted his list of 2013 Topps cards, I knew I had to jump on all the Reds I could find…unfortunately most of them were already claimed. But I did come away with one, and it arrived in the mail today…

Tony Cingrani appeared in 3 games, pitching 5 innings for the Reds late in the season. He was a third-round draft pick in 2011, and was actually featured on this blog that year as a part of the 2011 Reds (’92 Style) fun cards.

It’s great to finally have a 2013 Topps card in-hand. And it’s great to know how far away Cingrani is from Nolan Ryan‘s strikeout record. *smh* 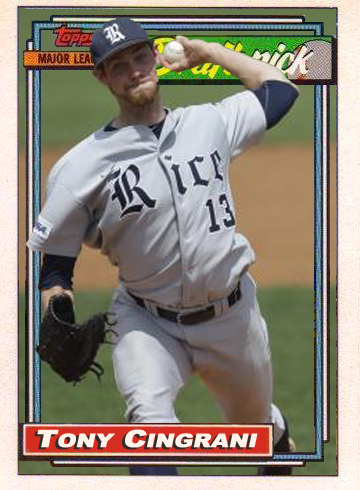 With the 114th pick of the draft, the Reds took left-handed pitcher Tony Cingrani, a senior at Rice.