What’s the difference between “Tom Petty & the Heartbreakers” and “Tom Petty”? 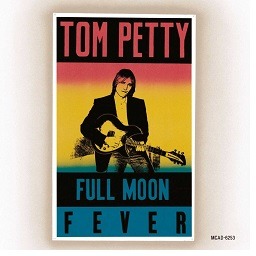 Don’t ask me. Full Moon Fever is the debut “solo” album by Tom Petty, even though members of the Heartbreakers were involved. The album was produced by Petty, Mike Campbell of the Heartbreakers, and Jeff Lynne of Electric Light Orchestra. Campbell and Lynne both played guitar, bass, and other instruments, while Petty’s other pals from the Traveling Wilburys, George Harrison and Roy Orbison, performed on a track each. The album features some of Petty’s most enduring music, such as “Free Fallin’,” “I Won’t Back Down,” and one of my personal favorites, “Runnin’ Down a Dream.”

This is one of those albums that should be in everyone’s library. If it’s not in yours…click here. Tom Petty and the Heartbreakers‘ self-titled debut was released in November, 1976, by Shelter Records. The first single, “Breakdown,” was a Top 40 hit, and has been covered in the studio by Grace Jones and Suzi Quatro, and by numerous artists in concert, including the Replacements and Foo Fighters. The band then released “American Girl,” which unbelievably did not chart in the United States until it was re-released in 1994. The song was used in several films, including FM, Fast Times at Ridgemont High, and The Silence of the Lambs.

Hungry for more Tom Petty? Check out Greg’s tribute at Night Owl Cards, matching baseball cards to the songs from Petty’s 1994 release, Wildflowers (one of my favorite Petty albums). Iconic classic rocker Tom Petty has passed away. He suffered a cardiac incident and was rushed to the hospital Sunday night. After LAPD inadvertently released incomplete information to media sources Monday afternoon, it has now been confirmed that Petty passed at UCLA-Santa Monica Medical Center.

I loved Tom Petty and I covered his songs because I wanted know what it felt like to fly.
“you belong somewhere you feel free.”
💔

No! We have lost Tom Petty. From our opening act in the seventies to becoming a brilliant songwriter and performer I have loved his music. pic.twitter.com/yhyPCfm2l6

Way too young…Rest In Peace Tom…. You’ll always be remembered as a Giant pic.twitter.com/OBDdtdKBgk

I’m crushed…
Praying for all those affected by Vegas last night.
And now the loss of one of my great influences Tom Petty today.
-JBJ pic.twitter.com/inkGqbMvD1

So sorry to hear we lost Tom Petty..thank you for the music, your time here brought much joy to the world…rest in peace. 😦

Just when I thought today could not get any worse…
R.I.P. Tom Petty. Thank you for your beautiful music and inspiration.

Tom Petty memory: I'm 14. "Refugee" blaring on stereo. Mom yells up stairs. "Do you really like that music?"

Tom Petty gone? That’s just so wrong. What a bad day this has been, in so many ways.