If you haven’t been checking out TWJ cards on tumblr every day, you have been missing out on some interesting baseball players. From Hall of Famers Satchel Paige and Randy Johnson to not-quite-Cooperstown-level guys Julio Franco and Steve Garvey, we’ve been featuring some interesting ballers in the “pre-season” set.

I have been working on short write-ups for them as well, but that portion of the “fun card” will be ending Sunday. I have other projects that require more time, and I just can’t justify taking the time to research and write for the tumblr page. The cards will continue, however. There are 170 total cards, and only 22 have been posted so far (23 if you count today’s image, which will appear around lunchtime on the east coast). Be on the lookout for Deacon White, Ernie Banks, Rolando Arrojo, Jim Sundberg, Cesar Cedeno, Fernando Valenzuela, Paul Goldschmidt, Dan Plesac, and many others on the TWJ cards on tumblr page!

And then, on Opening Day (the real one, not the one that is played on foreign soil), the official 2015 TWJ set will start to pop up. Want a preview? END_OF_DOCUMENT_TOKEN_TO_BE_REPLACED

Today is Steve Garvey‘s 65th birthday, and in a shameless attempt to see his cards posted on baseball card blogs everywhere, the Garvey Cey Russell Lopes blog is giving away a 1952 Topps card to someone at random. So of course I’m going to post a card, because I don’t have any 1952 Topps cards yet.

The Garvey card pictured above is from the 1986 Donruss All-Stars set. These big cards (3.5 x 5) first appeared in 1983, and lasted in this oversize variety through 1987. In 1988 the company decided to shrink them to “normal” baseball card size (2.5 x 3.5). 1986 Donruss doesn’t get much love these days, but I loved them as a kid. It was difficult to keep your cards looking mint with those non-white borders. but I loved them anyway. The main difference between the regular set and the All-Stars (other than the ginormosity of them) was the stripes. Instead of horizontal, the blue and black went from top to bottom.

Flipping to the back, we see that Garvey had a fairly impressive All-Star career. 1985 was his tenth and final All-Star game and he managed to belt out a .393 average in those contests. His 1974 campaign was especially impressive, being elected as a write-in and winning the MVP. In 1970, Rico Carty became the first player ever elected as a write-in; Garvey followed him in 1974. Has there been another since?

Of his ten All-Star appearances, Garvey started in nine games. In 1981, Pete Rose of the Phillies received more votes. Rose also won the fan vote in 1982, while Al Oliver won in 1983; Garvey was not selected as a reserve either of those years. In 1984, however, the former Dodgers first baseman rose back to the top and was selected to start over Keith Hernandez. In 1985, Rose and Jack Clark sat on the bench while Garvey took the field for the first four and a half innings.

I always thought Steve Garvey would be inducted into the Hall of Fame when his playing days are over, and while I would still like to see him get a plaque in Cooperstown, the truth is the numbers just don’t add up. He wouldn’t be the worst player in the Hall, but his selection would probably be seen by rabid baseball fans and historians as a mistake. Regardless, he was a great baseball player.

I do! Our good friend over at Garvey Cey Russell Lopes wants to see as many Steve Garvey cards on the blogosphere as possible on Sunday in honor of the Garv’s 65th birthday, and is bribing all of his friends with 1952 cards to make that happen. One person will be randomly selected to choose from fifteen possible cards to add to his collection. Of course, if I win, I’ll take the Cincinnati Reds card.

What is GCRL going to do with the rest of the cards? Who knows…maybe more contests are coming down the pipe, or maybe he’ll offer them up for trade, or maybe he’ll charter a boat and dump them in the ocean. But as for the current contest, click here to see the rules and regulations.

I will be posting a card or two on Sunday, but in the meantime, here’s a “fun card” of Steven Patrick Garvey in the style of 1952 Topps.

In 1986 Topps teamed up with Quaker to issue a 33-card set full of superstars, including a nice handful of future Hall of Famers. Over the next few days, we’re going to look at the cards in the set, beginning with the first nine cards today…

In 1986, these guys were enormously popular, perhaps none more than Dwight Gooden. The man had just won the Cy Young Award in 1985 with 24 wins and a minuscule 1.53 ERA…at the age of 20. Willie McGee was the NL MVP, leading the league with 216 hits and a .353 average, and teammate Vince Coleman had just come of an outstanding rookie campaign setting the record for most stolen bases by a first-year player. He won the Rookie of the Year award unanimously, shutting out the game’s first 20-game winning rookie pitcher since the 1960s.

There are currently only two Hall of Famers among these first nine players: Gary Carter and Tony Gwynn, but reasonable cases can be made for Dale Murphy, Dave Parker, and Steve Garvey. If I had to choose only one of the three for Cooperstown, Murphy would get my vote. While Parker and Garvey dominated the 1970s, Murphy was one of the biggest stars in the 1980s. Say what you will about his short peak, that five-year period between 1982 and 1986 was a fantastic run. Perhaps his chances would have been better if he had retired after the 1991 season, but I will not hold it against him for trying to stick around for a few extra years. When you love something, you want to keep doing it.

Still a ladies’ man at 63 years old, Steve Garvey gets a peck on the cheek from supermodel Chrissy Teigen.

Of the six #6’s retired by MLB teams, only two are currently members of the National Baseball Hall of Fame (though Cox is a pretty safe bet to join them one day).

Pesky is the only non-Hall of Famer whose number is retired by the Red Sox. Of his 72 years in baseball, 60 have been spent with Boston as a player, manager, and instructor. In 2006, the right field pole at Fenway was named “Pesky’s Pole,” and his #6 was formally retired in 2008. Prior to that, other BoSox players had worn #6, most notably Bill Buckner.

You will never be able to convince me that Steve Garvey should not be in the Hall of Fame.

This wraps up the “Taco Cards”…hope you enjoyed them. 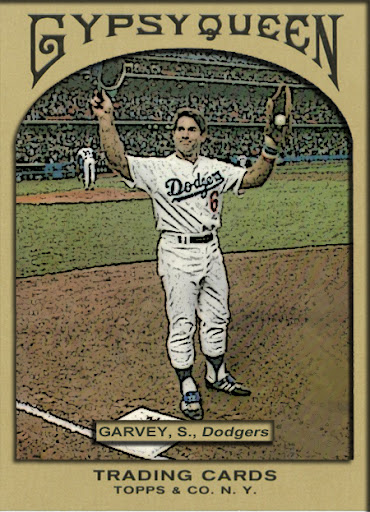 Growing up, I always thought Steve Garvey would be a Hall of Famer one day. But in his 15 years on the ballot, he never received more than 42.6% of the vote. He joins Don Mattingly, Dale Murphy, Alan Trammell and Jack Morris as the guys who I was sure would be in Cooperstown, but were rejected by the BBWAA.

The Hall of Fame yesterday announced the candidates for the Veteran’s Committee. This year all the candidates will come from the “expansion era,” defined as 1973-present. The names on the ballot

Growing up, three of these guys were in my “future Hall of Famer” shoebox of baseball cards: Concepcion, Garvey, and John. I would not be opposed to the induction of any of these candidates, though, as I am a “large Hall” type of guy. #1 on my list, as a Reds fan, is obviously Concepcion, and he has a pretty good shot this year. Two former teammates, Johnny Bench and Tony Perez, are on the 16-man committee, and they may be able to sway a few votes his way. Will they be able to convince ten other guys to vote for him? Hard to say, but he may have the best shot of any of the players on the ballot.

I have divested myself of Mets and Dodgers

Almost completely. With the exception of doubles and a few select cards, all of my Mets and Dodgers cards will be shipped out tomorrow to Mark, Jim, and Greg. I have Cardinals and Royals set aside for another, as soon as I hear how many Reds he can send. And you’re on deck. What’s your team? How many Reds do you have to trade?

(and here’s the back to that card)
(and here’s a 2008 Topps style card using a photo taken
the same day, designed by Paul’s Random Stuff)