Shin-Soo Choo had a down year for the Rangers last year, batting only .242 and stealing three bases after a .285 campaign with 20 steals in 2013 for the Reds. He is still struggling in 2015, batting .182 through seven games. But that’s better than 2014 Reds left fielder Ryan Ludwick, who was released on March 29 by the Rangers and has not found a new team yet. I never really understood Walt Jocketty’s obsession with Ludwick. Other than 2008, he was never really all that good. I think I prefer Billy Hamilton in centerfield and Marlon Byrd in left.

Why is it so difficult to get going again after vacation?

I took a week off from work last week, and it was nice. We didn’t do a whole lot, other than go to St. Louis for a day, but it was nice to go about my day without the hustle and bustle of actual work. This Monday it was a real chore getting out of bed to go back. Tuesday, believe it or not, was even harder.

Why is it so difficult to get going again after vacation? I have now worked two full shifts and a partial overtime shift since coming back, and am scheduled to work this weekend. But I really really really don’t want to go.

The blog has also suffered a bit this week. I scheduled a bunch of posts for last week while I was off, and still had internet access so could get on and do a little housekeeping. But I did not prepare anything for this week, and honestly haven’t been in the mood to get back into gear. I still have a few books to read and review, but most of my reading is done at work during downtime, so when I’m not at work, I don’t read as much. Thus, no book reviews this week. (There will definitely be at least two next week, though.)

Despite my apathy in working and posting, however, it is nice to receive cards in the mail, and even nicer that they don’t get abused and destroyed when they are left sitting in a mailbin for several days waiting for me to get them. Night Owl Cards sent nine cards from the 2013 Topps Opening Day set to me last week, and they were still in mint condition when I ripped open the package.

I needed six of the cards, and my youngest son didn’t have the other three yet, so all nine are going into binders in the house.

If it’s so difficult for me, a regular guy, to go back to work after just a week off, I wonder how difficult it is for baseball players when they have several months off in the winter?

Also, a reminder that I’m putting together a list of bloggers (and other collectors) to send out occasional PWEs. If you send me your address and favorite team, I’ll add you to the list. I may not send as often as others do, but I really need to get rid of some cards!

A month ago, I would have guessed that Shin-Soo Choo would be one of the outfielders on the All-Star team. He had such a hot start and was such a pleasant surprise for the Reds, it was reasonable to expect him in the midsummer classic. He cooled off a bit though, and so we are left with this “fun card” of a guy who should have been an All-Star, similar to Tony Bernazard in the 1987 Topps set.

Thanks to TWJ contributor Patrick for another fantastic “fun card.”

My youngest son has been after me for a few days to make a Shin-Soo Choo card for him, so I used some of my spare time this weekend and slapped the centerfielder on a 1984 Topps design, one of my favorites from the 1980s. 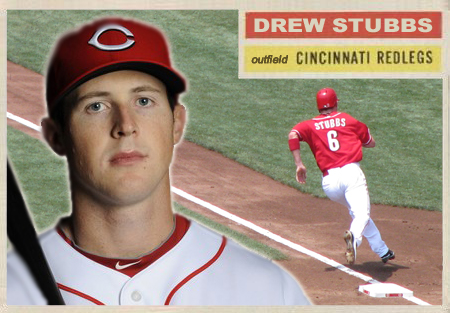 Drew Stubbs is rounding third and heading for Cleveland! Have the Reds solved their lead-off dilemma? Only time will tell, but by the look of the stats, they stole Shin-Soo Choo from the Indians in exchange for Stubbs. In 2012, Choo beat out the former Reds centerfielder in hits (169-105), doubles (43-13), RBI (67-40), batting average (.283-.213), and perhaps most importantly for a top-of-the-order batter, on-base percentage (.373-.277). Though he doesn’t have the base-stealing prowess of Stubbs, Choo could at least get on base for the Reds’ big bats: Joey Votto, Jay Bruce, and the newly-inked Ryan Ludwick.

Welcome to the Queen City, Shin-Soo Choo…don’t let us down!

Disappointed by how many failures I had in April from my initial e-mails, I decided to send another request to the teams that had not yet responded with a fan pack this season. These e-mails went out early Monday morning, and by Wednesday I already had my first response. The Cleveland Indians did a pretty good job of putting together a mid-season fan pack, with a schedule, a couple of large postcard-sized baseball cards, and a snazzy color team photo. I wish all teams sent out these photos. There were also some coloring pages and a word find that my kids will have fun with when they are stuck in the car for hours next week when we go to Pittsburgh.

Looking at my travel itinerary, Cleveland would be just a half-hour out of the way. Too bad they’re not in town while we’re on the road, or I might have stopped by for a game. Maybe next year.

Like what you see? Request your own Cleveland Indians fan pack at this link. Be sure to say “Please” and “Thank you!”