Sean Casey, affectionately known as “The Mayor” in Cincinnati, was a hitting machine. In eight seasons with the Reds, Casey collected 1223 hits and a .305 average. He made three All-Star games but failed to collect a hit in two at-bats.

Todd Frazier put on a show at the Home Run Derby a couple of weeks ago, but there was a guy in the stands that stole a little bit of the spotlight for about ten seconds. Reds Hall of Famer Sean Casey was hanging out with the fans and snagged one of the home runs that flew his way, and TWJ contributor Patrick immortalized the moment on virtual cardboard for all of us to enjoy.

Casey, also known as “The Mayor”, hit 130 home runs during his own big league career, and appeared in three All-Star Games representing the Reds. Three times he hit 20 or more home runs, and twice he reached 99 RBI, but was never able to get to the century mark.

Patrick sent this card over shortly after the event, but I failed to post it right away because of other obligations. My schedule is settling down now a little bit, and I should be able to take better care of the site. I apologize to Patrick for the delay, and to the readers for the infrequency of posts recently. Hopefully things are back on track and you will see something happening here more than once a week.

I recently sent Jim at GCRL a handful of Dodger cards, and he responded in kind with some Reds goodies. Here are a few of the cards that are now a part of my collection…

The Redlegs just signed their up-and-coming catcher Devin Mesoraco to a new 4-year deal worth $28 million. It boggles my mind that sports contracts are so much today. And we keep supporting them by shelling out big bucks to the games, at the concession stands, at the souvenir shops. I get by as cheaply as I can, and I don’t load up on souvenirs and such, but it’s still a mystery to me how they get away with it.

Sean Casey was inducted into the Reds Hall of Fame a few years ago. I never really paid much attention to “The Mayor,” as his career was largely during my dark days of “baseball is for kids” days. During that time, very few players were on my radar, and Casey simply wasn’t one of them.

A few years ago, I joked that Aaron Harang always pitched when we went to a game. I couldn’t stand seeing him on the mound, but it seemed like every single time we went to the park he was the starting pitcher. Then, for the 2011 season, he signed a free agent contract with the Padres. And wouldn’t you know it, the very first Reds game we went to was against the Padres, and Harang was pitching. I saw him again late in the 2013 season when the Mets came to town. I’m willing to bet we will go to a game in 2015, and he’ll be pitching for the Phillies. I just can’t stay away from Aaron Harang.

I liked Edinson Volquez, and was upset when the Reds traded him to San Diego for Mat Latos. To me, Latos never lived up to his potential, and I was not upset when he got shipped off to Miami this year (where he will probably wind up winning the Cy Young Award). Meanwhile, Volquez signed a 2-year deal with a team option for 2017 with the Kansas City Royals. I don’t think he’ll replace James Shields, but hopefully he’ll be more like the 2008/2014 Volquez than the 2009-2013 Volquez for KC.

Thank you for the cards, Jim!

The official induction of Casey, Driessen, and Reilly into the Reds Hall of Fame will take place at Great American Ball Park before the 4pm Cincinnati Reds–Minnesota Twins game this Saturday, June 23rd.

FOX Sports Ohio will feature a special hour-long Reds Live pregame show starting at 3pm to cover the pregame celebration and on-field ceremonies. Marty Brennaman will be the master of ceremonies on field, and Casey and Driessen will address the ballpark crowd.

Click here for an entire schedule of the Reds Hall of Fame weekend.

Congrats to the new Reds Hall of Famers!

Three new names will be added to the roster of Reds immortals. Sean Casey was selected by the fans, while Dan Driessen and Big John Reilly were selected by the Veteran’s Committee.

Casey and Driessen were still missing from the Redsfest lineup as of 4:30 p.m. Monday, a half hour after the announcement. (I’m impatient, ok?) 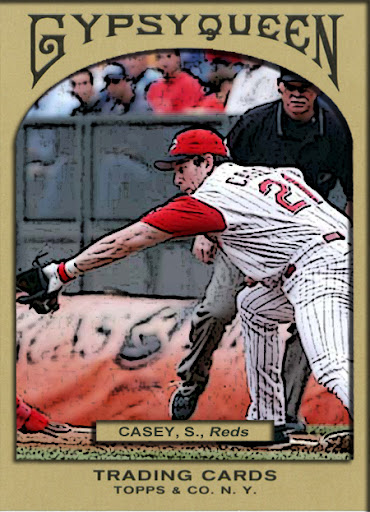 I gotta say, I’m kind of amazed how many photos there are of Sean Casey in a Red Sox uniform. I barely remember him going to Boston. He will always be the mayor of Cincinnati to Reds fans.

Are you getting excited about the 2011 baseball season yet? In less than three weeks, the boys of summer will be on the field playing games that “count” and making more money than most of us could ever imagine.

Today we have two former Reds who are helping out in camp…two of the most popular Reds in recent history. The first: Sean Casey. Casey began his career in Cleveland, but became known as “The Mayor” during his tenure in Cincy. He hit .302 for his career, and only dipped below that mark three times in eight years as a Red. This year he returns to Cincinnati to assist in the broadcast booth. 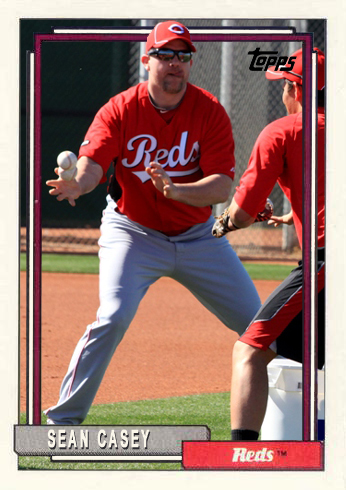 The second: Barry Larkin. Lark will be the most recent Cincinnati player enshrined in the Hall of Fame, when the BBWAA takes the blinders off. I’m hoping 2012 is his year, as the competition on the ballot begins to stack up again in 2013. (Larkin’s real 1992 Topps card can be seen here; his 1992 Topps All-Star card here.) 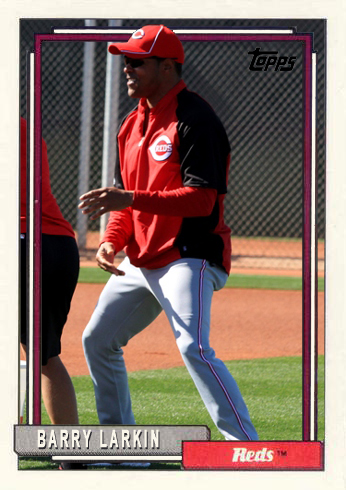 When you put these “fun cards” side-by-side, you see the full picture…well, almost the full picture. I’m not sure who the dude is with his back to the camera, but one thing is for sure: he’s got some very knowledgeable defensive instructors there.

Trade with The Lost Collector

There’s a new kid on the block, The Lost Collector. He’s a Yankees fan, but don’t hold that against him. I sent him a small stack of Yankees last week, and he returned the favor with a sampling of Reds.

“The Mayor,” also known as Sean Casey, who will be working in the Reds broadcast booth a bit this year…

And a couple of Austin Kearns cards, including one from the awesome 2003 Donruss Diamond Kings set…

I just couldn’t help myself…I made some more fun cards! Mike from Awesomely Bad Wax Packs sent me a couple of cards earlier this week, but I didn’t have anything to send back to him…so I made some fun cards of his current favorites, Anibal Sanchez and James Shields!

I also made a card for Johan Santana, who was recently traded to the Mets, and Sean Casey, who just signed with the Red Sox.