Devastating news in the horror community as iconic screenwriter and director Wes Craven has passed away at the age of 76 from brain cancer. His credits include the original A Nightmare on Elm Street (as well as Part 3: Dream Warriors and New Nightmare), all of the Scream movies, Shocker, The People Under The Stairs, The Serpent and the Rainbow, The Hills Have Eyes, The Last House on the Left (both the original and the remake), just to name a few. His presence will definitely be missed.

Tags: A Nightmare on Elm Street, Scream, Shocker, The Hills Have Eyes, The Last House on the Left, The People Under the Stairs, The Serpent and the Rainbow, Wes Craven

The many “Faces” of Gypsy Queen

In the 19th century, there was a baseball player named Connie Murphy. His nickname was “Stone Face.” This post isn’t about him.

Nor is it about “Tomato Face” Nick Cullop or “Baby Face” Marv Breuer, who played in the first half of the 20th century.

Roy Face was a 3-time All-Star and won over a hundred games in his career, mostly with the Pittsburgh Pirates. But this post isn’t about him either.

This post is about a couple of other faces: Leatherface and Ghost Face. 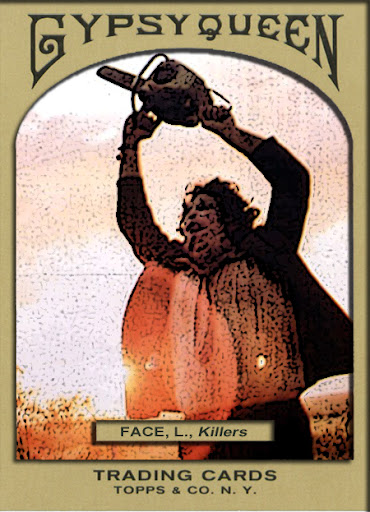 Leatherface, aka Thomas Hewitt, was the killer in The Texas Chain Saw Massacre. I just watched the 2003 remake last night, and it wasn’t as bad as I expected it to be. I can’t believe it has been eight years since that movie came out, or that it has taken me so long to finally watch it. Nowhere near as good as the original, but still entertaining for the most part.

Ghost Face is the baddie from the Scream franchise. The fourth installment was just released recently, but I haven’t seen it yet. The only one I really remember is the original, but I think I have seen Scream 2 and Scream 3.