I have nothing against Brayan Pena personally. He is hitting well this year and filling in nicely while Devin Mesoraco is off injured. But when Pena was signed, it meant another catcher had to leave… Shortly after Pena was signed in 2013, Ryan Hanigan was dealt to Tampa Bay in a three-team trade. I was a huge fan of Hanigan while he was in Cincinnati, and was very sad to see him go. This past winter, the Rays sent him to the Padres in another three-team trade, and later the same day the Padres shipped him to Boston.

In a three-way trade involved the Reds, Rays, and Diamondbacks, catcher Ryan Hanigan is headed for Tampa. What do the Reds get in return? David Holmberg, Diamondbacks prospect who pitched mostly in AA last year with a 2.75 ERA and 116 strikeouts in 157 1/3 innings. Is this a great trade for the Reds? Probably not, but it’s better than getting nothing for the aging catcher (33 years old). Holmberg is only 21 and has been compared to Terry Mulholland and David Wells, impressing Kirk Gibson and other Arizona coaches last spring. His AA pitching coach said, “He has a great feel for four pitches. He has good sink, excellent location and he carries himself like he’s never nervous, never fazed. He’s going to be a good, solid major league pitcher.”

The Reds are pretty crowded on the mound, so I don’t expect to see Holmberg in a significant role for Cincinnati for at least a year. But it’s always good to have some insurance in the minor leagues in the event of injury. Just look at what Tony Cingrani did for the Reds last year when Johnny Cueto went down.

While not a great trade that will have immediate positive impact, it does show that Walt Jocketty didn’t want to let Hanigan go for nothing.

Ryan Hanigan, one of my personal favorites, was just traded to the Tampa Bay Rays. Possibly a part of a three-way deal, his is the only name that has been leaked to the press thus far.

Hanigan struggles with the bat, but is one of the best catchers in the game from the standpoint of calling a game and handling the pitchers. The Reds will miss his experience; hopefully he taught Devin Mesoraco plenty in the time they spent together. The signing of Brayan Pena a few weeks ago gave the team the freedom to deal Hanigan. 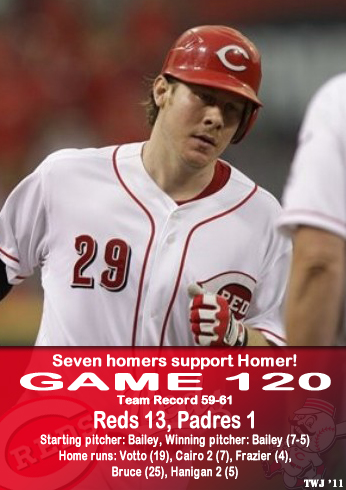 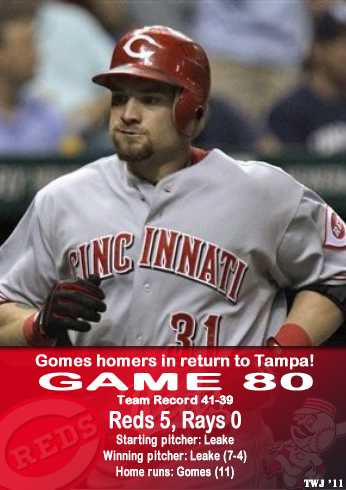 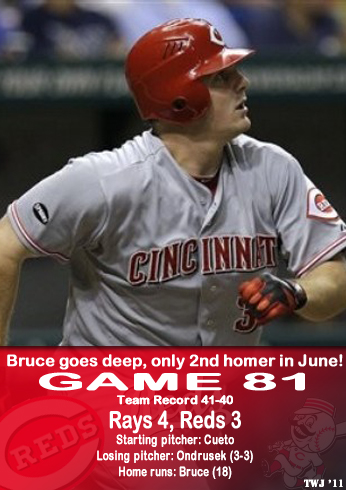 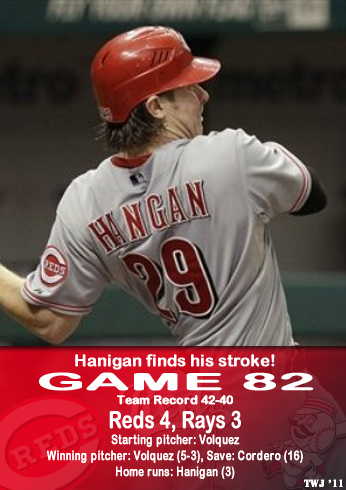 That didn’t take as long as I expected. Whether I will stay caught up or not remains to be seen.

I found it interesting that Jay Bruce‘s home run Tuesday was only his second of the month, after hitting 12 in May. I wonder how the rest of his stats stack up? Let’s see:

Wow. What a difference a month makes. Too bad he didn’t flip-flop those months, or he would almost certainly be among the top 3 outfielders in voting for the All-Star game. As it is, he sits sixth in voting and may not even get a spot as a reserve with his dismal June. 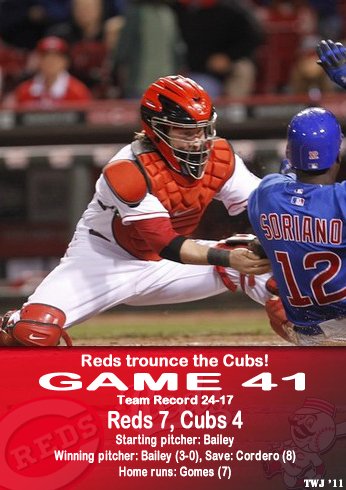 The Reds rallied in the 6th last night with 7 runs to beat the Cubs. Homer Bailey’s ERA ballooned to 1.89. I won’t complain about an ERA like that ever.

Everybody was All-Star Voting

To the tune of “Kung Fu Fighting,” of course.

Doesn’t it seem WAY too early to do this? If you’re using stats to determine who to vote for, at least. Which I only did for the American League. A little bit.

And why only one write-in per league? I call foul. I hate voting for Jonny Gomes, but I can’t write in Chris Heisey because I’ve already written in Ryan Hanigan.

Anyway, here’s how my personal ballot shakes out:

Bruce and Hanigan at PNC Bank

Jay Bruce and Ryan Hanigan made an appearance at a Cincinnati-area PNC Bank today. I took the boys over and were surprised by Rosie Red, too! We got a few things signed and I snapped a few photos. They also gave away a couple of nice 5×7 glossies, but we chose to get our own items signed instead…

I had the extreme pleasure of attending my first baseball game of the 2011 season Thursday with my brother-in-law, who had never been to a baseball game before. The Reds fought valiantly, and Sam LeCure pitched a tremendous game, but the bats were cooler than usual and they couldn’t overcome the Astros’ three runs. Here are some shots from the bleachers of the game…

Hunter Pence (I usually try to snap a few shots of the opposition’s star players. But let’s face it, the Astros just don’t have a lot of star power other than Pence.) 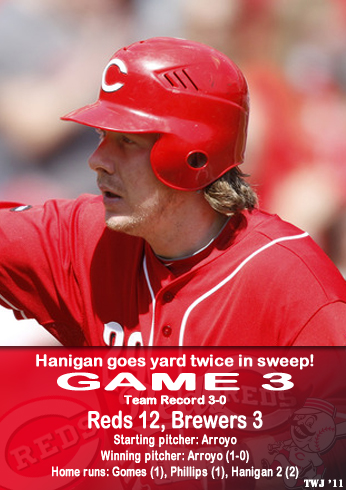 Ryan Hanigan was the hero of the day: 4-4, 2 HR, 4 RBI. Many of you know that I’ve been a Hanigan fan for a while now, and he continues to impress me. Maybe one of these days he will get his due and be invited to participate in the All-Star Game!

BTW, White Sox Cards is doing a similar custom set called “Season Pass.” The design is much better and Steve is even making card backs for the cards…with a photo on both the front and back! Insanity, I tell ya. Check out 2011 White Sox Season Pass cards by clicking here!