Ask any baseball fan about rivalries, and you will likely hear about the Yankees and Red Sox, or the Giants and Dodgers, or the Cubs and Cardinals. But four decades ago, the answer may have included the Cincinnati Reds and Los Angeles Dodgers. Both teams played in the National League West, and consistently battled for a postseason spot. From 1970 to 1979, with the exception of 1971, these teams finished first and second in the division; seven out of ten years, one of these teams made it all the way to the World Series. If you were a Reds fan, you hated the Dodgers, and vice versa.

Author Tom Van Riper goes back in time in Cincinnati Red and Dodger Blue, revisiting the rivalry of these 1970s powerhouses, taking a particularly close look at a game in late September when the Reds visited Dodger Stadium. Cincinnati won that game in extra innings, and refused to relinquish first place the rest of the year. Van Riper spotlights all of the major names from each team: the Hall of Famers (Johnny Bench, Joe Morgan, Tony Perez, Don Sutton), the superstars (Pete Rose, Steve Garvey, Ron Cey), the executives (Al Campanis and Bob Howsam), and even the announcers (Vin Scully and Al Michaels).

Van Riper also touches on some of the off-the-field history revolving around these teams, including the surgery named after Los Angeles pitcher Tommy John, the free agency fiasco involving Andy Messersmith, and the late-‘80s gambling woes of the Hit King.

Covering so many players from two teams, Van Riper is unable to go into much depth in this relatively short volume, just over 200 pages. As such, some of the anecdotes seem disjointed and forced, even if they are relevant to the rivalry. There are better historical accounts of the Big Red Machine out there, and I’m sure the ‘70s Dodgers have had similar superior treatments as well. Cincinnati Red and Dodger Blue is a good primer on both teams, but I would not consider it a must-have if your library already boasts other Cincinnati or Los Angeles team histories. 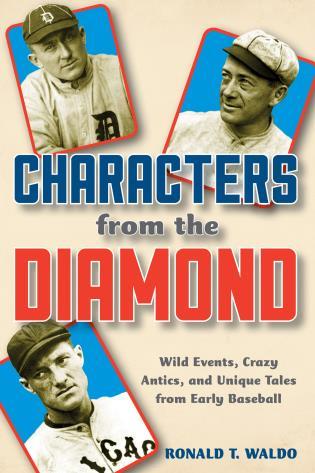 Baseball, at its root, is a game, it’s meant to be enjoyed and to have fun. It’s hard to remember that as the great game of baseball has turned into a business that turns many fans away. Wouldn’t it be nice to sit back and be reminded about how much fun the game of baseball can be? Fun yet played at the highest level?

In Characters from the Diamond: Wild Events, Crazy Antics, and Unique Tales from Early Baseball, you will be reminded of how much fun this game can be. Focusing on the late 19th century and early 20th century, author Ronald T. Waldo does a great job of telling funny stories about those that made the game so great. From players’ high jinx on the field, to fiery managers and hot headed umpires, you will be captivated by stories that will make you laugh and show you how the pioneers of baseball had fun playing the game.

The Voices of Baseball by Kirk McKnight (2015) The Voices of Baseball
by Kirk McKnight
Rowman & Littlefield, 2015
340 pages

Some young boys dream of hitting a home run in the big game, while others want to tell the world about it. Baseball fans all have their favorite broadcasters, whether they were the radio play-by-play guys or the television color commentators. The Hall of Fame presets the Ford C. Frick Award every year to a broadcaster for his contributions to baseball. The sport depends upon the commentary provided by these men to drive the water cooler conversation the next day and generate interest among young fans.

In The Voices of Baseball, author Kirk McKnight talks to a representative voice of each major league team, and shares their stories and insights on great moments at the team’s current ballpark. After thirty chapters, McKnight shifts focus to the former ballparks, then to the voices that have been silenced by death.

Of special note to this Reds fan, obviously, is the chapter devoted to Great American Ballpark and Marty Brennaman’s recollection of Homer Bailey‘s 2013 no-hitter. In the chapter on defunct stadiums McKnight and Brennaman make mention of the Big Red Machine and the 1990 Wire-to-Wire champs. Then, in the chapter entitled, “A Seance from the Booth,” tribute is paid to the ol’ left-hander Joe Nuxhall, who shared the broadcast booth with Brennaman for 31 years.

The Voices of Baseball is an excellent collection of memories from the men who witnessed history on the diamond. Baseball fans young and old will treasure this book.

Purchase The Voices of Baseball by Kirk McKnight.

Baseball Myths: Debating, Debunking, and Disproving Tales from the Diamond by Bill Deane (2015) Baseball is the most romanticized of all the sports, with legends growing more legendary with each passing season. In the days before the internet, unbelievable stories were told among friends and incredible feats were reported in newspapers…but how many of those stories and feats were embellished? The truth behind some of the game’s most enduring tales, while based on actual occurrences, are uncovered by author Bill Deane, former senior research associate at the National Baseball Hall of Fame and managing editor of Total Baseball.

Legends surrounding Ted Williams, Joe DiMaggio, Derek Jeter, Pete Rose, and Babe Ruth are all examined and for the most part soundly refuted. Some issues may still be left to speculation and disagreement, but Deane has done a remarkable job with his research and explanation of his findings. The book is divided into four sections: “Baseball’s Infancy,” “The Truth About Ruth,” “The Lively Ball Era,” “Timeless Myths,” and “The Expansion Era.” In this paperback edition, two additional myths are disproved about Cool Papa Bell (scoring from first base on a bunt) and Harry Chiti (the player traded for himself).

Each myth is clearly marked and swiftly dealt with; the reader can take in one or two at a time, or delve into larger chunks of text and learn more about baseball’s history in a short amount of time. Baseball Myths: Debating, Debunking, and Disproving Tales from the Diamond is excellent for young fans as well as old, and everyone who picks up this book will be able to start separating fact from fiction in the national pastime.

I can recall when I first discovered Led Zeppelin. I don’t remember which song (probably “Stairway to Heaven”), but I do remember being floored by the power and grace of the music. It was the early 1990s, and in short order I possessed all the Zeppelin albums and listened to them time and time again, along with other new-to-me discoveries Jimi Hendrix and The Doors. Over time, I have expanded my musical taste more and more, but Led Zeppelin is one of those timeless groups that will always be central to my love for rock and roll.

Author Gregg Akkerman takes readers on a journey through Led Zeppelin’s studio recordings in Experiencing Led Zeppelin: A Listener’s Companion, breaking down each record song-by-song, with additional in-depth looks at two to three songs per album. His description of Led Zeppelin’s early live performances of “Stairway to Heaven” in eerie, and I could feel myself being transported back to 1971 to witness the genesis of what would become the greatest rock song of all-time. You may not always agree with Akkerman’s assessments of particular songs, but he gives a fair amount of ink to each. Led Zeppelin fans new and old will love this book.