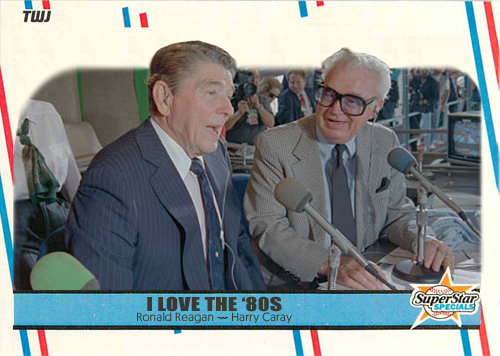 Former First Lady and widow of the late President Ronald Reagan, Nancy Reagan passed away today from congestive heart failure. She was full of class and grace and served this country well. He was one of the most respected presidents that has served this country, and countless books have been released to celebrate his eight years as the leader of the free world. This recent release from Thunder Bay Press, written by Randy Roberts and David Welky, is a brief but respectful overview of President Reagan’s life, including his career in film, governorship of California, and the presidency.

What sets this book apart from others, however, are the pieces of removable memorabilia included. Reprints of magazine covers, brochures, a ticket to the 1981 inauguration, and a “Reagan-Bush ‘84” bumper sticker are among the eleven pieces of removable memorabilia. Fans of the late President will cherish these mementos along with the commentary and photographs found throughout the volume.

I Am Dreaming Heroic Dreams

You and I, as individuals, can, by borrowing, live beyond our means, but for only a limited period of time. Why, then, should we think that collectively, as a nation, we are not bound by that same limitation?

Fire up the printing presses, offer bailout packages to more businesses that got where they are because of bad (and sometimes deceitful) decisions, and borrow, borrow, borrow from nations to whom we already owe untold amounts.

In this present crisis, government is not the solution to our problem.

We do not need mandatory nationalized health care, or more government programs to rule our day-to-day lives. We need the freedoms that were granted to us in the Constitution to be preserved and protected, not thrown to the wayside. Yes, the Constitution is a very old document, but it has served us very well thus far. Why change that which needs no change?

From time to time, we have been tempted to believe that society has become too complex to be managed by self-rule, that government by an elite group is superior to government for, by, and of the people. But if no one among us is capable of governing himself, then who among us has the capacity to govern someone else? All of us together, in and out of government, must bear the burden. The solutions we seek must be equitable, with no one group singled out to pay a higher price.

Why should the employed pay for the unemployed? Why should the industrious pick up the slack for the slothful? Each of us must do our part. If we each succeed, we all succeed.

We are a nation that has a government—not the other way around. And this makes us special among the nations of the Earth. Our Government has no power except that granted it by the people. It is time to check and reverse the growth of government which shows signs of having grown beyond the consent of the governed.

Mr. President, I respect you as a person, but I disagree with many of the policies on which you campaigned. Do not impose your will upon the lives of the people of this nation if that will includes an intrusion which was never intended by the Founding Fathers of this, the greatest nation in the history of the world.

Now, so there will be no misunderstanding, it is not my intention to do away with government. It is, rather, to make it work—work with us, not over us; to stand by our side, not ride on our back. Government can and must provide opportunity, not smother it; foster productivity, not stifle it.

We have every right to dream heroic dreams.

The above quotes were taken from President Ronald Reagan’s inaugural address 28 years ago–January 20, 1981. I have interspersed some of my own comments in between his quotes. Consider them a plea to our current President, Barack Obama, and a plea to the country as a whole to live up to the ideals that were set forth by those brave men who declared independence from an overbearing government, and fought to establish their own, which they have passed down to us.

Click here for an interesting article regarding Ronald Reagan and universal healthcare.

I’m going to run for President

That’s right, folks…breaking news! I am officially announcing my intention to run for the office of the President of the United States of America in 2020. I will fill you in on some of my views in the coming years, but I need you to step up now and show me that you’re serious about my decision. I am not a Republican or a Democrat. Like the great General George Washington, I refuse to affiliate with either political party. I am an American, will run as an American, and will run for Americans!

Now, I will need quite a bit of help in this endeavor. I have already spoken with some close friends who have agreed to help out, but I need to reach out to some total strangers as well. This article outlines how difficult an independent run can be, and so I figured it would be best to start way early.

Are you willing to help me, a middle-class American, a non-politician, who loves America and wants this country to return to being the best country in the world? If so, please leave a comment, let me know what state you currently live in, and what issues are important to you. I will begin developing my platform over the next couple of years, and will answer all of your relevant questions.