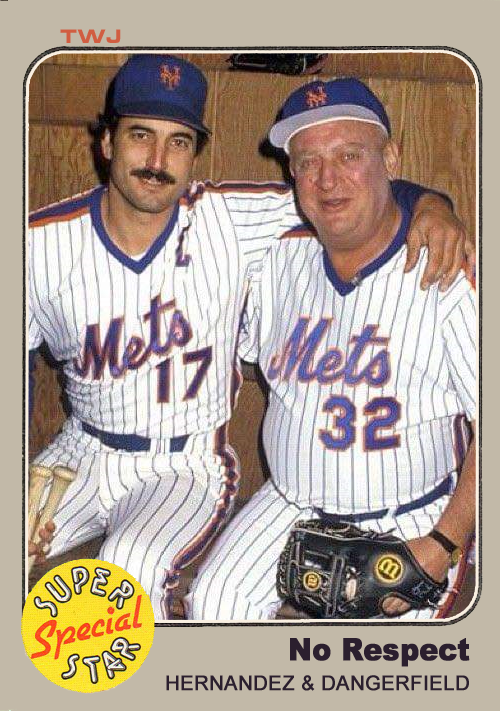 When I saw this photo pop up a few weeks ago, I knew I had to make a baseball card out of it. For some reason, I got a very 1983 Fleer vibe from it, even though Keith Hernandez didn’t wear the Captain’s “C” until 1987.

“No Respect” is, of course, the late Rodney Dangerfield‘s catchphrase. But it can easily be applied to Mex, one of the greatest defensive first basemen in baseball history. Despite his fielding excellence, coupled with a solid offensive career, Hernandez was shunned by the BBWAA when it came to Hall of Fame consideration. He received more than 5% of the vote from 1996-2003 to stay on the ballot, but dropped to 4.3% in 2004.

Is he a slam-dunk Hall of Famer? Obviously not, but he certainly wouldn’t be a bad choice either. Hopefully the Veterans Committee will do the right thing and induct Hernandez when he is again eligible for consideration. The only question then is whether he would wear a Cardinals cap or Mets cap on his Hall of Fame plaque.