Redfest is quickly approaching. I won’t be going this year (for the third or fourth year in a row). I’m more interested in getting alumni autographs than current players, and while there are a couple of names on the list that have not been at the past 20 events, there aren’t enough to make me want to go. Besides that, I’ll be out of town that weekend.

Back in 2008, I attended one of my first Redsfests. And I experienced one of my biggest baseball card-related regrets. I even documented it on the blog… 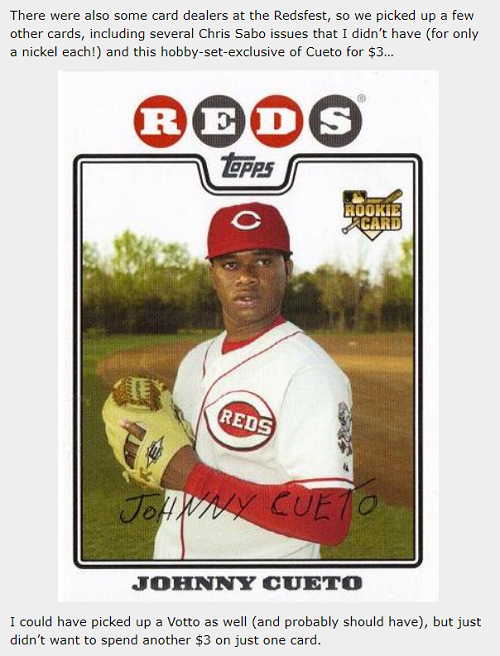 That Joey Votto card that I didn’t buy for $3 is difficult to come by these days. Last time I searched for it, I couldn’t even find it on eBay. There are a couple listed right now; the cheapest is $23.99 plus shipping, and that’s more than I generally pay for single cards.

I could have had the Votto for $3.

The Johnny Cueto? A couple bucks plus shipping on COMC. 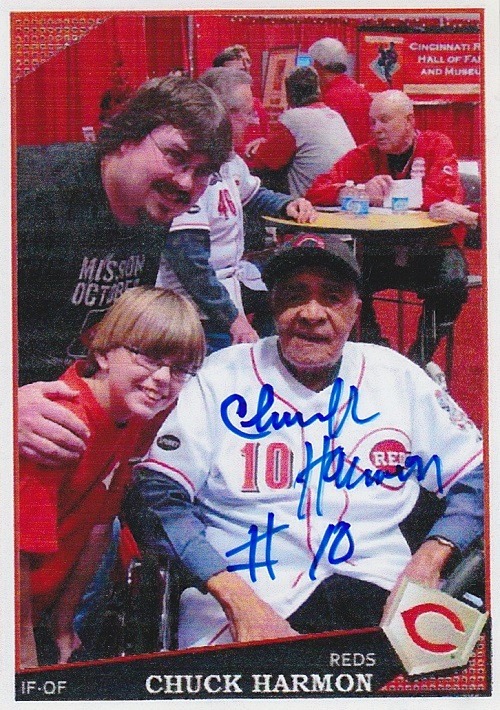 For several years, my oldest son and I would attend the Redsfest event held in December. We met a lot of cool people, got tons of signatures, and always had a good time. I think the highlight of all the Redsfests we have attended occurred in 2010 when we met Chuck Harmon for the first time.

Chuck Harmon became the first African American to appear in a game for the Reds when he pinch hit for Corky Valentine on April 17, 1954. In the same game, Nino Escalera also debuted for the Reds; Esccalera was also black, but was Puerto Rican, not African American. Harmon was an excellent athlete, and also tried out for the Boston Celtics when the NBA was integrated for the 1950-51 season. After failing to make the Celtics, Harmon finished the season as a player-coach for Utica of the American Basketball League. According to Wikipedia, that made him one of the first (and possibly the first) African Americans to coach an integrated professional basketball team.

At the 2010 Redsfest, Harmon was one of the players in the backstage/lounge area reserved for those who purchased Hall of Fame Memberships. He was confined to a wheelchair, and he had someone there with him (I’m assuming it was his son) to carry his things and push the chair. He talked to Joshua and I for several minutes, talking about Jackie Robinson and how Jackie was “a pretty good ballplayer.” As we were getting ready to leave, he told his son to get some cards out of his bag, then asked for a pen to sign one that he had not yet autographed. His son said, “You’re not supposed to do that back here.” Harmon took the cards and pen, looked straight at one of the workers, and said, “Let them sue me!” 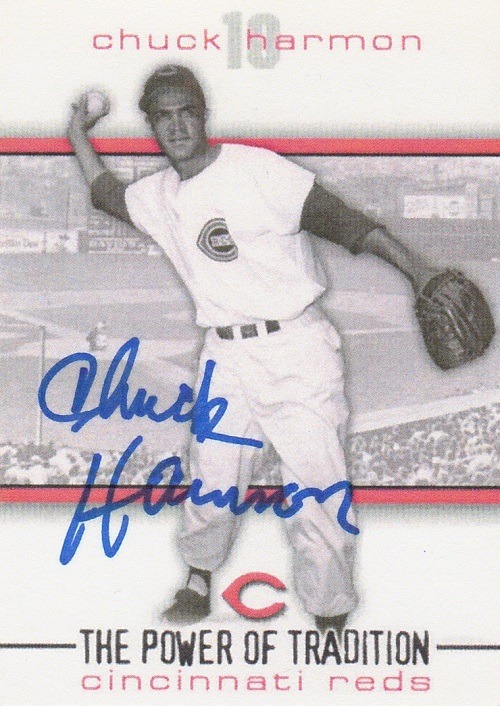 He then signed the cards and handed them to my son and I. A truly nice man, and an experience that neither of us will soon forget! On his now-defunct website, Harmon said, “Most importantly, I would most like to be remembered simply as a good person.” There is no doubt that he will be remembered as such by those who met him.

We saw him again the next year, and had him sign a special custom card that I had made from the photo taken in 2010. He was signing copies of his book, but you didn’t have to buy one to get his autograph. Amazingly, there was no one in line to meet him. I still regret not purchasing the book and getting it signed as well.

Harmon passed away on Tuesday, March 19, 2019. I will forever treasure the memory of meeting him.

END_OF_DOCUMENT_TOKEN_TO_BE_REPLACED

One of the happiest guys I have ever met is Leo Cardenas. He is always smiling, and always a pleasure to talk to at Reds events.

Big Red Machine pitcher Jack Billingham was the first of the Reds alumni autographs we received on Saturday.

This is my first Billingham autograph. I love getting cards from the 1970s signed. The signature always make them look better. What was really interesting about this 1973 card was the back…

So, is it true? Is Billingham really related to Christy Mathewson? I asked him about that tidbit, and he said, “My grandmother told me that once, but I had no way of really knowing. I told someone else, and it they used it ever since.”

OK, what I said about the signature making the card look better? I guess that’s not always the case. Not sure what the problem was here, maybe the Sharpie was going bad?

Sitting at the same station as Sam LeCure was another reliever, Logan Ondrusek. To be honest, I don’t know much about him, but he seems to do pretty well when he comes into the game. In my opinion his stats support that; 5-2 last year with 2 saves and a 3.46 ERA.

The only Ondrusek card I own is from the 2011 stadium giveaway set. I’m fine with that for the time being, but I do hope to add some more Logans to the Reds binder in the future.

The next autograph of the night came from pitcher Sam LeCure, a fan favorite because of his mustache as much as his baseball ability.

The first autograph of the day was pitcher Mike Leake…starter or reliever in 2013? With Aroldis Chapman possibly moving to the starting rotation, Leake might find himself in the bullpen.

I was curious how the autograph would look on the sparkly card, and I gotta say it looks pretty fantastic.

Whether Leake is a starter or reliever next year, I hope he is still wearing a Cincinnati Reds uniform.