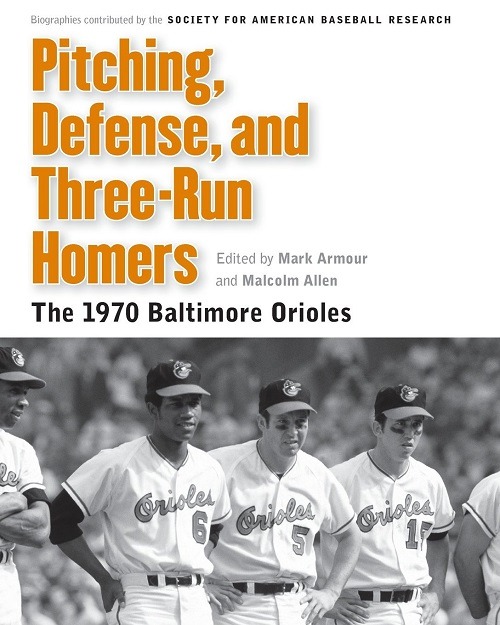 Every franchise has a story to tell, and a true baseball fan can appreciate success that comes as the result of hard work, even if the winner is not that fan’s favorite team. In 1970, the Baltimore Orioles dominated their opponents on their way to a World Series championship. That domination was made possible by a system of belief that was ingrained in Orioles players from their days in the minors; that system was called “The Oriole Way.”

Editors Mark Armour and Malcolm Allen, along with biographies from the Society for American Baseball Research, celebrate “The Oriole Way” in Pitching, Defense, and Three-Run Homers. This volume is filled with statistics and anecdotes for all the contributing members of the 1970 squad, from skipper Earl Weaver and his “Ten Laws of Baseball,” stars Jim Palmer and Brooks Robinson, to key role-players such as Chico Salmon and Terry Crowley.

In addition to the player biographies, Allen contributes a “Timeline” for each month of the 1970 season, displayed the Baltimore Sun‘s headline for each game as well as a brief write-up. The book culminates with a concise, three-page chapter describing the 1970 postseason. The authors don’t revel in the victory, but present a well-balanced, factual account of how the Orioles triumphed over their rivals.