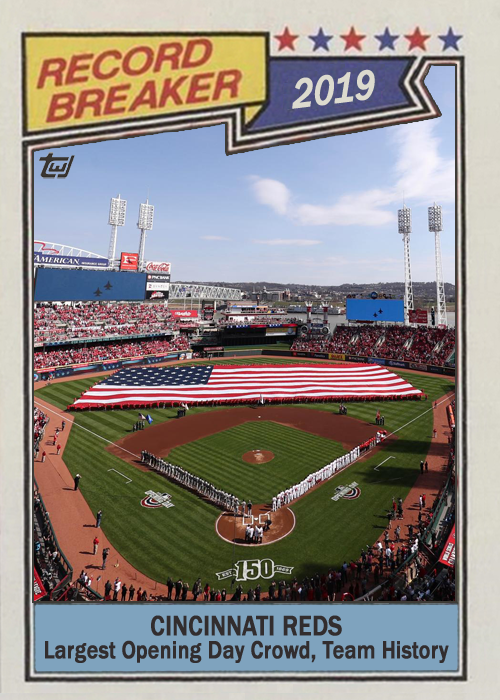 The Reds hosted their largest Opening Day crowd on Thursday, but that was followed just a few days later with the lowest attendance in the history of Great American Ballpark. Opening Day is practically a holiday in Cincinnati, but it’s a short-lived fervor for America’s pastime. 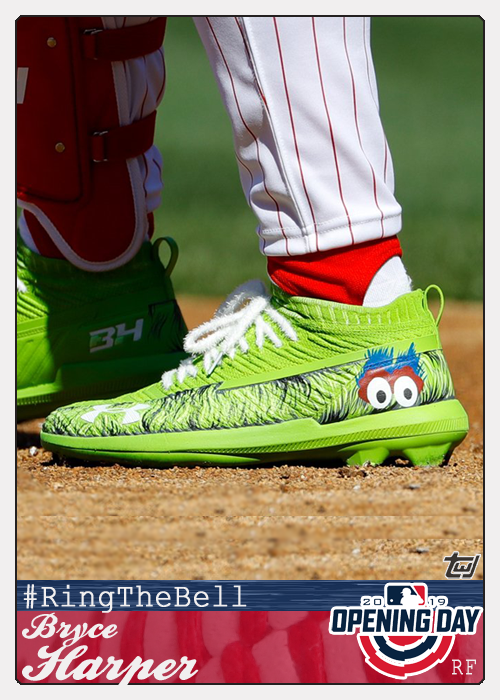 END_OF_DOCUMENT_TOKEN_TO_BE_REPLACED

The Reds have only posted pictures of a couple of players on their Twitter feed so far, so I took them and turned them into baseball cards… 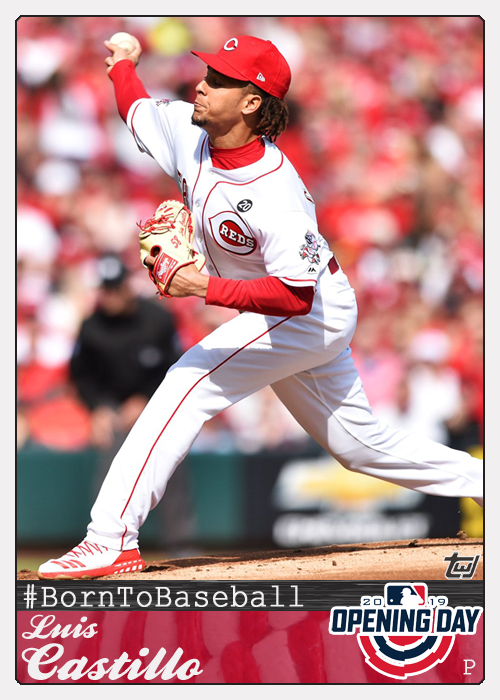 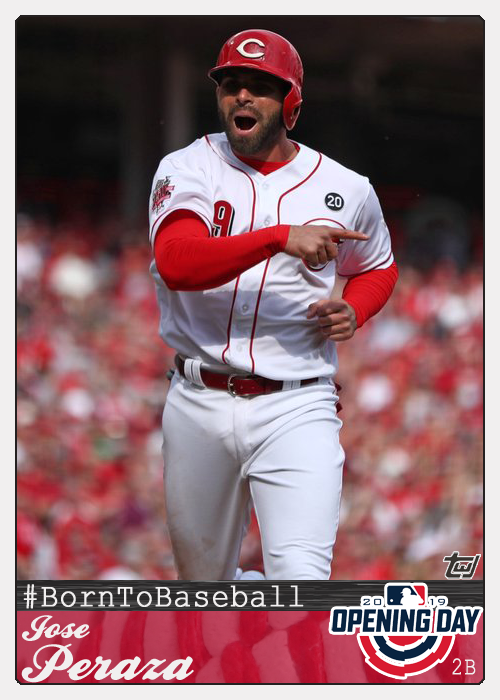 Luis Castillo got his first-ever Opening Day start in the majors; Jose Peraza scored the first run for the Reds in 2019 and hit a 3-run homer in the 7th.

I will update this later if I find additional photos. 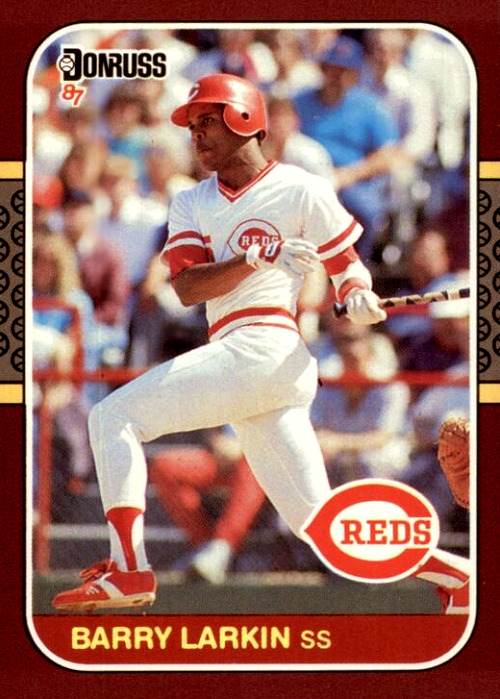 Finally! Opening Day is here! The Reds All-Time Opening Day Lineup includes three Hall of Famers, and a guy who may garner some serious consideration for Cooperstown when his career comes to an end.

Pete Rose deserves a special mention. He was in the starting lineup 17 times at 6 different positions, including 16 years in a row from 1963 to 1978. Five times in leftfield, four times at third, three times each at second and rightfield, once in center and finally at first in 1985. 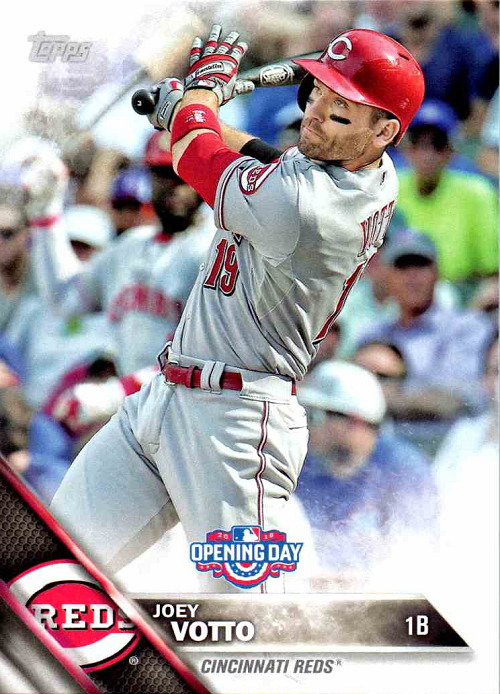 If I made a baseball card set called “Opening Day”…

It would look a lot like the 1987 Donruss “Opening Day” set. Not design-wise, but concept-wise. It would feature only the starters from Opening Day, perhaps the manager or mascot as well. It would (if possible) feature photos from Opening Day. I would definitely avoid using the same photo as used in the flagship set. Thirty teams, ten cards per team…a nice 300-card set featuring the starting lineup for each team. 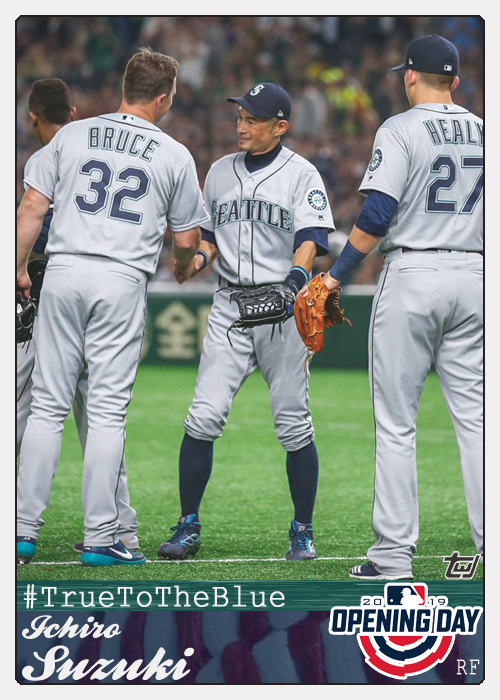 The Mariners and A’s played the first game of the 2019 season early Wednesday morning in Japan. Well, it wasn’t early in Japan, but it was early here in the States. 5:30 a.m. Eastern time. I was able to watch the first inning and a half before my shift at work ended.

The Mariners Blog posted a bunch of fantastic photos, and I converted several of them into “fun cards.” The only player omitted from that post was Jay Bruce, but I was able to find a photo for him from an exhibition game played earlier in Japan. 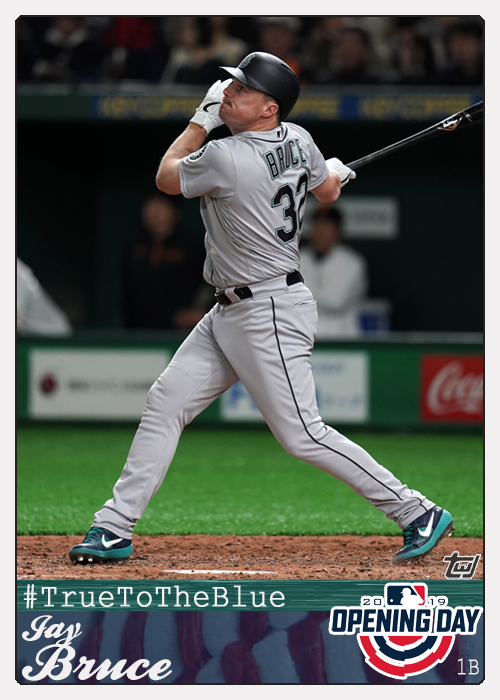 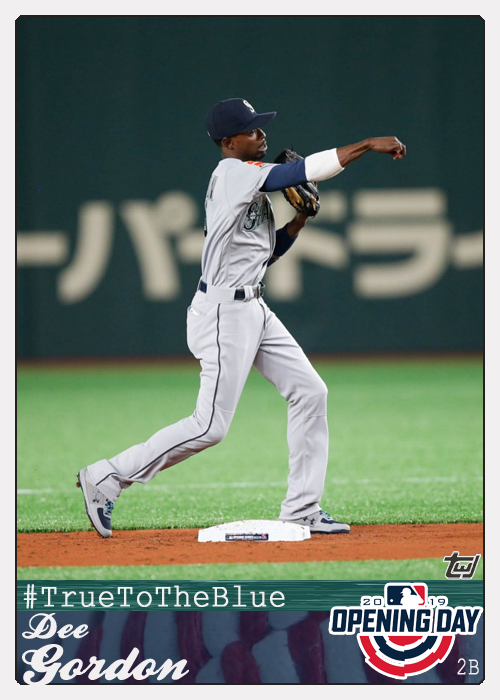 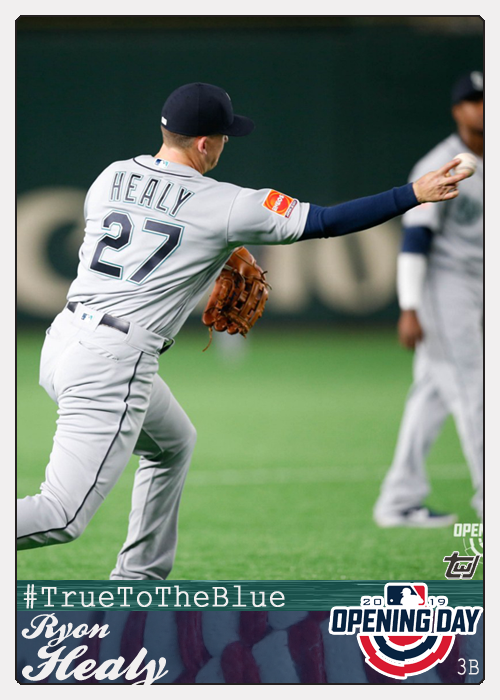 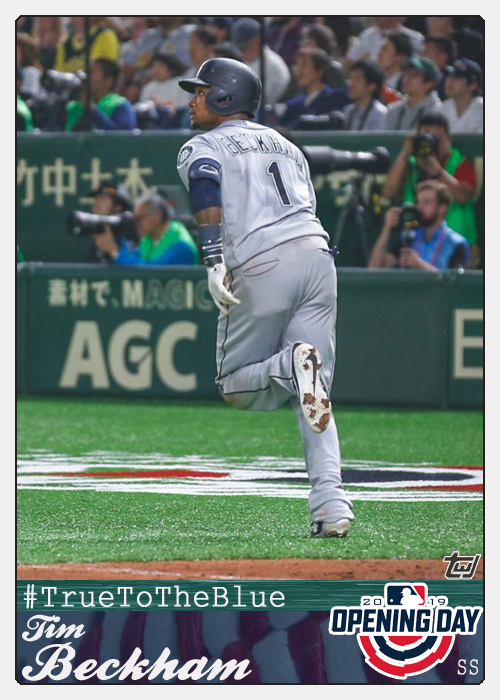 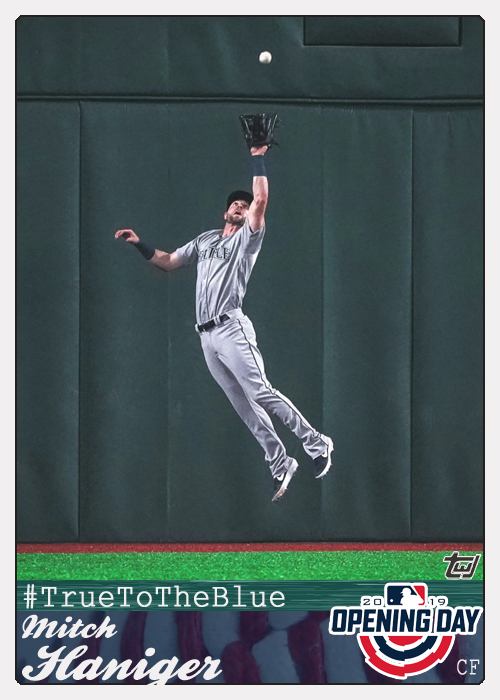 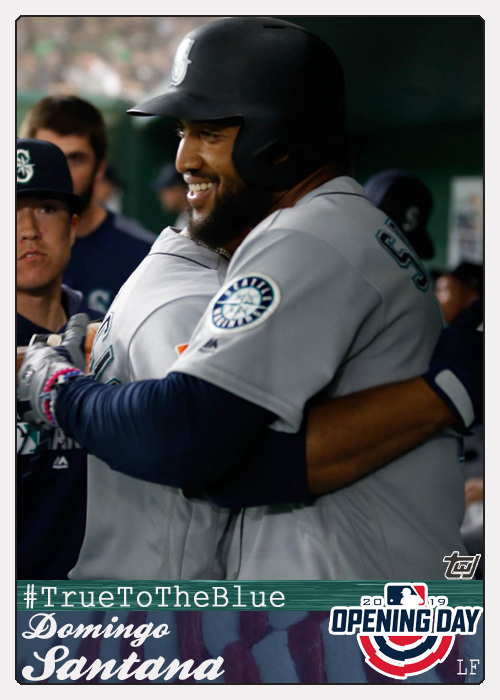 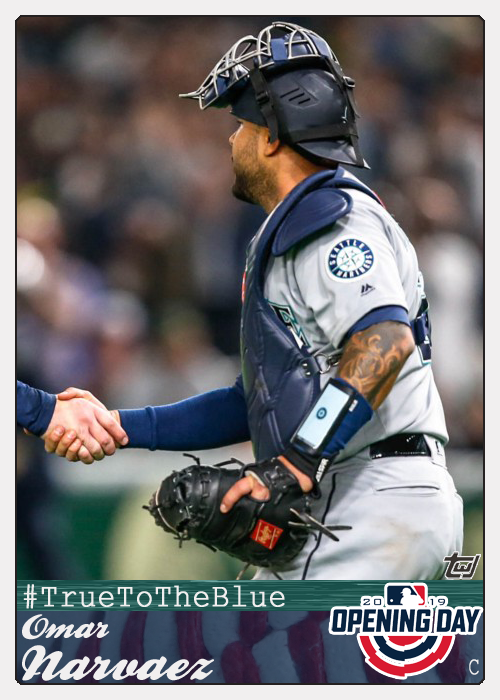 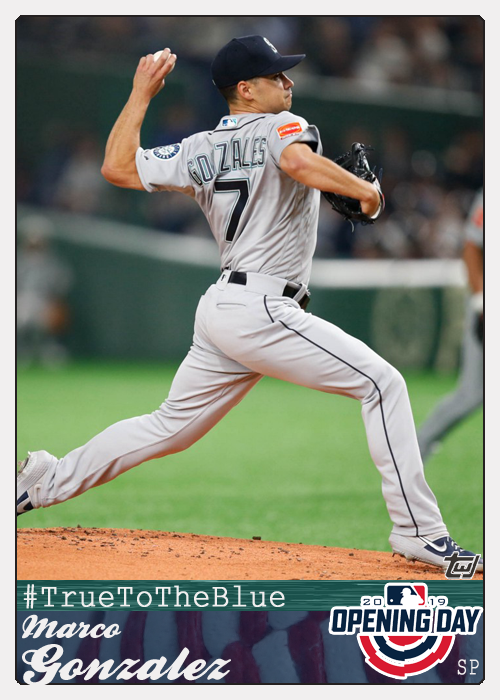 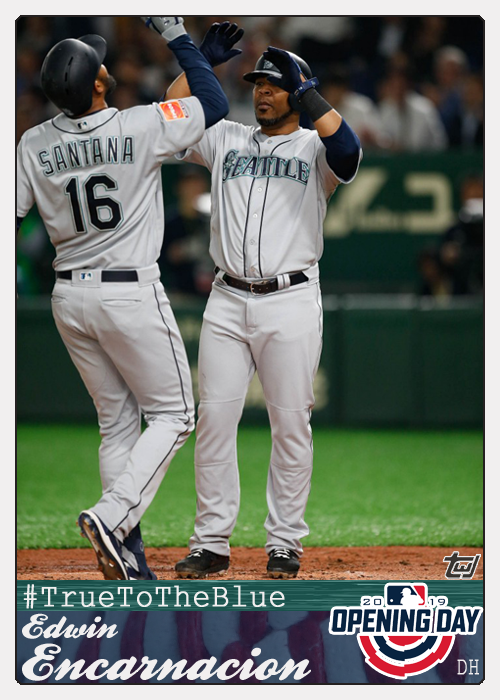 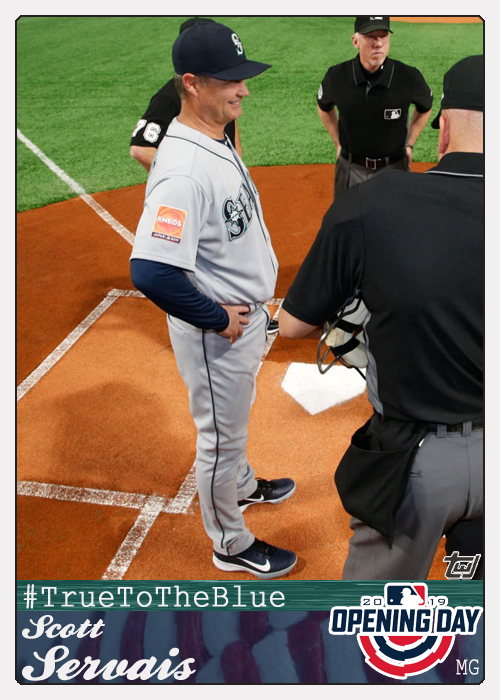 It was not as easy finding photos on the A’s side. I’m sure there is a good blog that posted nice photos, but I didn’t spend a lot of time searching. I did find enough from the game on Twitter and Google to make five players and the manager. The A’s starting lineup was Matt Olson (1B), Jurickson Profar (2B), Matt Chapman (3B), Marcus Semien (SS), Stephen Piscotty (RF), Ramon Laureano (CF), Chad Pinder (LF), Nick Hundley (C), Mike Fiers (P), and Khris Davis (DH). They are managed by Bob Melvin. 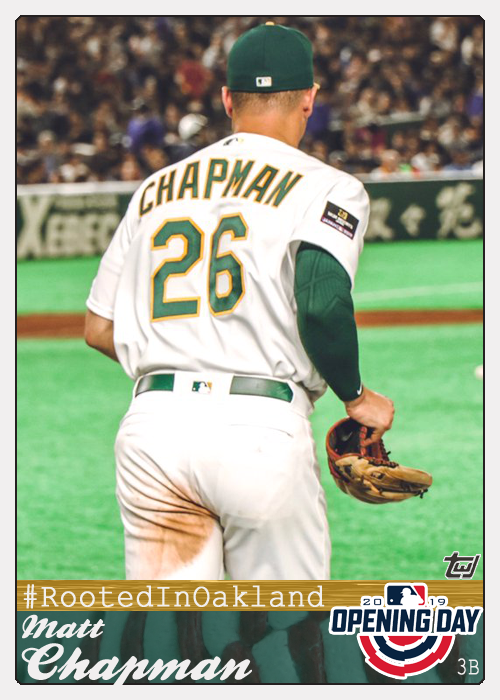 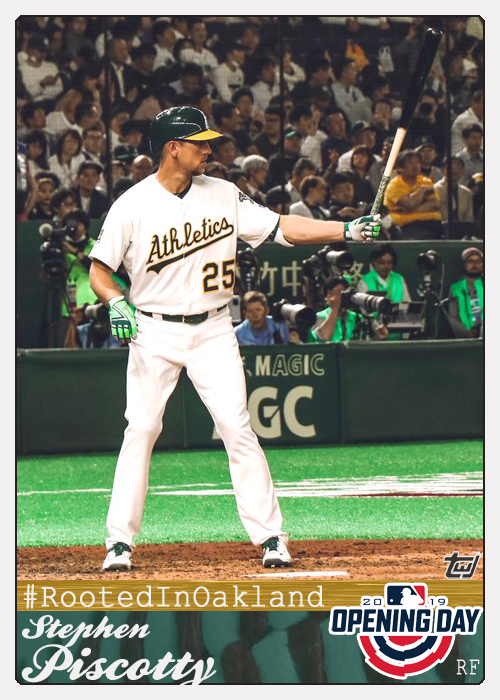 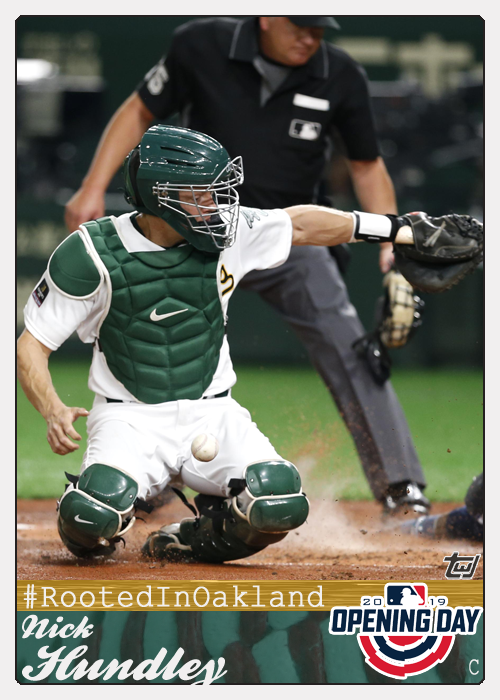 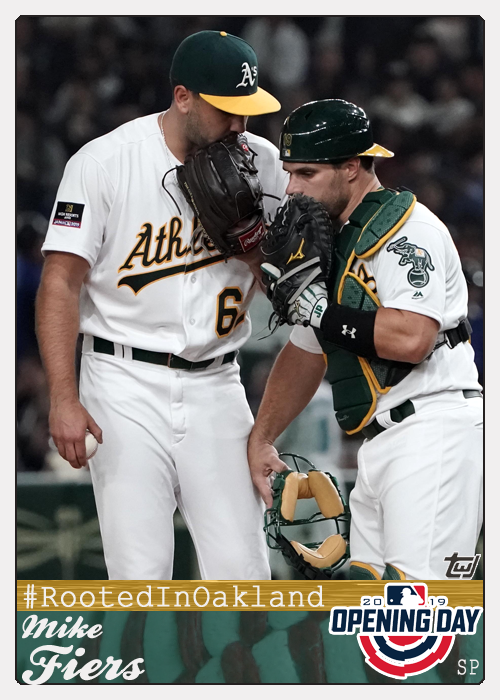 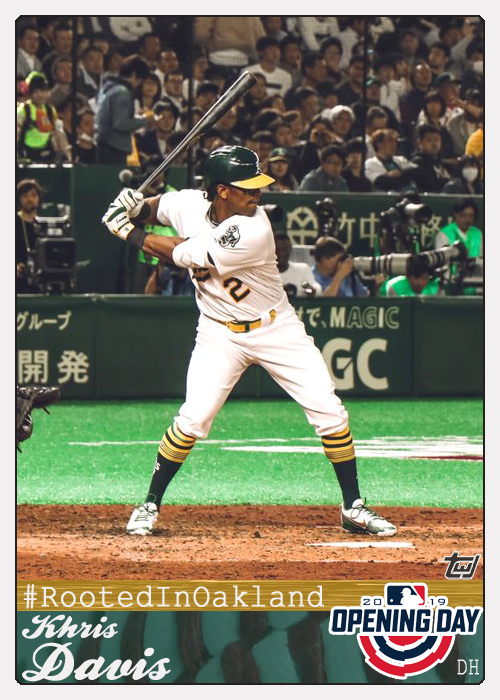 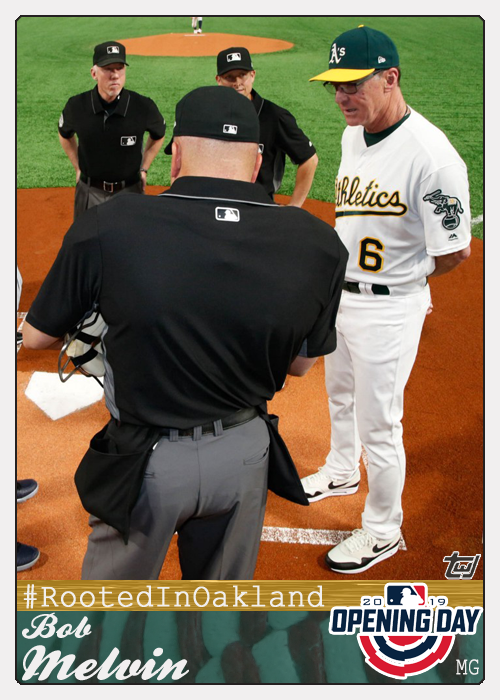 This design has a definite 2007 Fleer flavor to them. Not what I was going for, but I don’t hate it. It may be a little too similar to other designs I have made in the past though.

I plan to make a few of these for the Reds as I find good photos from Opening Day. If other teams post some good pics on Twitter, I may do a few non-Reds as well. Is there anyone you would like to see in this design (assuming, of course, they are in the starting lineup next Thursday)? I don’t care what happened yesterday in Tampa or ‘Zona or St. Louis…today is Opening Day. And despite the five games scheduled before 4:10 and three games scheduled to start at the same time as the Reds-Phillies showdown at 4:10, baseball does not truly start until (…what’s-his-name…hang on, let me look it up…) Scott Feldman (…that’s it…) throws the first pitch in Cincinnati. That’s the way it used to be, at least.

For years, the first pitch of the regular season was always thrown by a Cincinnati pitcher in Cincinnati. Because Cincinnati was the home of the first all-openly-professional baseball club, the Queen City was given the honor of officially starting the baseball season. That changed sometime in the 1980s I think, and I blame Bud Selig 1000000% for the change. Look at all the other traditions he messed up while he was in baseball. The All-Star Game determining home field advantage for the World Series, instant replay, time clocks, turning a blind eye to Jose Canseco‘s exploits, expansion, more expansion, moving Milwaukee to the National League, moving Houston to the American League, collusion, designated hitters, outlawing the spitball…you name it, Bud Selig had his dirty hands all over it. There is no doubt in my mind that he was instrumental in destroying the tradition of starting the season in Cincinnati.

I won’t be attending the game today (not sure when my first trip to the park will be), but if it’s not raining I plan to listen to it on the radio (and long for the days of Marty and Joe Nuxhall telling me all the action on the field). I love Opening Day because I love baseball, despite Bud Selig’s efforts to change my mind. Opening Day puts everyone on equal footing. The World Championship of 2016 means nothing today. Today is all about striving toward the Series in 2017.

That said, I do not expect the Reds to do well this season. Their pitching is an absolute mess. But the offense, if it can stay healthy, promises to bring excitement to Great American Ballpark. Joey Votto looks to continue his second-half performance from last year when he was unstoppable. Jose Peraza will get a chance to shine every day at second base. Zack Cozart is back, and hopefully he will be able to pick up where he left off in 2015 when he was playing like an All-Star before his injury. Eugenio Suarez was a pleasant surprise last year, as was All-Star Adam Duvall. Scott Schebler is a question mark, as is Billy Hamilton‘s on-base percentage. Hamilton is amazing to watch once he gets to first base, but that first 90 feet is such a struggle for him. Devin Mesoraco will take up his position behind home plate in a couple of weeks, but Tucker Barnhart is a serviceable part-time fill-in.

If not, at least we still have more mascots than almost everyone else in the big leagues. Opening Day is an event in Cincinnati, and baseball season makes this area livable. I can’t stand the wintery weather, the slush and snow and ice, but April through October makes November through March worth it.

Johnny Cueto was stellar for the Redlegs today, striking out ten batters, including his 1000th career K. Jay Bruce launched a solo home run, and Todd Frazier drilled a three-run shot in the eighth. Aroldis Chapman shut down the Pirates in the ninth inning. All in all, this was almost a perfect Opening Day. Rain delayed the game between the sixth and seventh innings for a little while, and Kevin Gregg was almost the goat giving up a two-run dinger to Andrew McCutchen. Seriously, why do the Reds always have a guy in the bullpen that can’t get out of an inning?

Thanks to my friend Travis for thinking of me when he had an extra ticket. I LOVE BASEBALL!!!

Isn’t it great? Finally, the greatest game in the world…the only game that really matters…is back!

Night Owl Cards always does a great post on Opening Day…click on this link and see it for yourself.

I won’t be attending the festivities today, but plan on getting to the ballpark more often than I did last year. I can’t wait to see the guys on the field again…Joey Votto, Jay Bruce, Brandon Phillips, Johnny Cueto…all fighting to bring home another title to the Queen City.

Jose Reyes, whose rookie refractor is worth more than I expected…

A pinch-hitting pitcher? I expected Micah Owings to stay in the game after he batted, but he didn’t. This photo was used for the Goose Joak Original Baseball Card Project…check that out here.

Is this guy worth a Freel? I wasn’t impressed yesterday. Sure, we needed a catcher, but for Freel?

My 9-year old and I braved the cold weather and snow today (after a sunny 70 degrees yesterday afternoon) and went to the Cincinnati Reds 2009 Opening Day!

Hometown hero Nick Lachey was on hand to throw out the ceremonial first pitch. You might know Nick as one of the guys from 98 Degrees (one of those carbon copy boybands of the 1990s), or as the ex-husband of Jessica Simpson. But he’s also part owner of the Tacoma Rainiers (Seattle’s Triple-A affiliate).

The honorary captain of the game for the Redlegs was Hall of Famer Frank Robinson.

Aaron Harang took the hill for the Reds…

Only three hits for the home team, all coming from the team’s young bucks…

The Reds lost the opener, 2-1, but they are a young team and very fun to watch. Jay Bruce made a great throw from right field and nailed a runner trying to score, which was very exciting. There were a few blunders in the field (though only one official error), and no balls left the park for the Reds. Their lone run came from a Brandon Philips sacrifice fly, driving in McDonald.

A very fun day, and I’m definitely looking forward to visiting Great American Ballpark again in the near future!