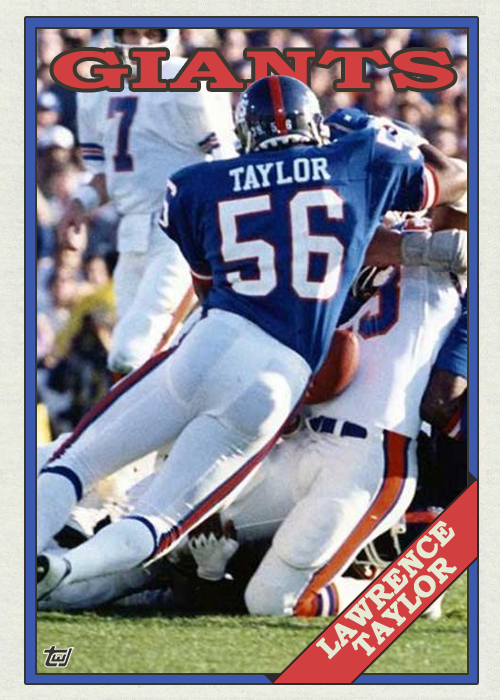 Lawrence Taylor has such an impressive resume: Defensive Rookie of the Year, Defensive Player of the Year, Most Valuable Player, ten-time Pro Bowler, eight-time All-Pro, two-time Super Bowl Champ, Hall of Famer. Despite all the accolades, he also has a devastating downside. Multiple drug suspensions and arrests. Such talent, but how much greater could he have been? 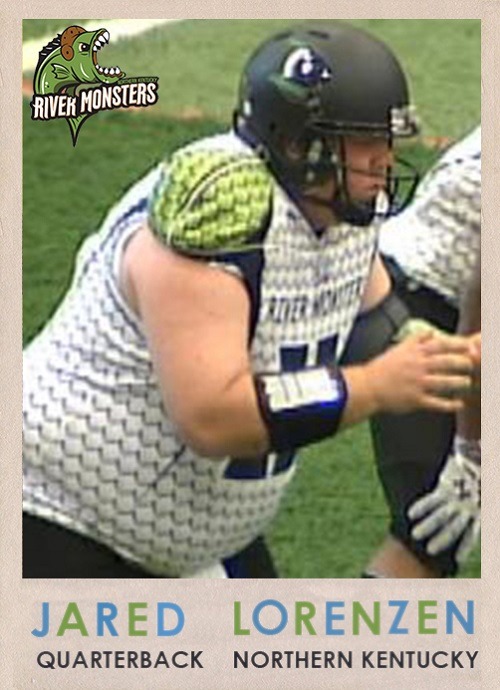 Former University of Kentucky and New York Giants quarterback Jared Lorenzen passed away today from an acute infection complicated by heart and kidney problems. He was 38. He was also a graduate of Highlands High School in Fort Thomas, Kentucky, a few years after me. The card above was created by TWJ contributor Patrick several years ago.

Our hearts our heavy with the news of the passing of Jared Lorenzen. pic.twitter.com/rqIHrTKAQI

Statement from #NYGiants:
Jared was a special person, and a beloved Giant. He was an important member of our 2007 team, one that created its own destiny. Our thoughts are with Jared’s family and friends who loved and appreciated him so much, just as our organization and fans did. pic.twitter.com/z6TLw8WeO2

“Jared was a great teammate and friend. We competed against each other in college and came to the Giants together. My thoughts and prayers go out to his family. I will always remember his competitive spirit and his good nature. Jared has left us all way too soon.”
-Eli Manning pic.twitter.com/OdgZYZ4xvL

Tom Coughlin on Jared Lorenzen (1/2): "I’m shocked to learn of Jared’s passing. Jared had a fun-loving, yet serious attitude. He was a good athlete, he had touch and versatility, and he was serious about trying to get his weight under control… pic.twitter.com/FxBCre6K8Y

Coughlin (2/2): "Jared got along well with his teammates, and he contributed a lot in his hometown. He worked with young kids in teaching them the game of football. My thoughts are with Jared’s family and the Giants family. It’s sad to lose a kid who tried so hard to play again." pic.twitter.com/AcRhnMaj5a

We lost a great one too soon today. Our hearts are with the Lorenzen family.

Thanks for the memories, J Lo. #22 pic.twitter.com/5gmEe3Bq4p

Man. RIP Jared Lorenzen. One of the most unique and kind-hearted teammates I ever had. Very very sad to see you go.

Rest in Peace to a college legend.

Jared Lorenzen was a baller. pic.twitter.com/iHpnv2B9ER

Former Giants QB Jared Lorenzen has died at the age of 38. pic.twitter.com/XM68HKQsph

I had crummy camera equipment during his time at UK. But I always liked this one of Jared Lorenzen watching Artose Pinner cross the goal line, circa 2001. pic.twitter.com/obOTzZkMjz

Here is a statement from the family of Jared Lorenzen pic.twitter.com/vTJn2gdNU5

In his senior season (‘98) at Highlands, Jared Lorenzen completed one of the greatest seasons of any QB to have ever played in Kentucky. Long a major oversight of Hall of Fame voters, George Davis was championed by baseball historian Bill James prior to his induction. In 1995, James wrote that Davis was the best player outside the Hall, while Total Baseball rated him as the 21st greatest baseball player in history. He had never appeared on a BBWAA ballot, but the Veterans Committee finally decided Davis could join the other immortals in Cooperstown in 1998. According to JAWS, he is the fourth-best shortstop of all-time, behind Honus Wagner, Cal Ripken, and a stinkin’ cheater. In other words, Davis is the third-best. Hall of Fame outfielder Monte Irvin passed away of natural causes at the age of 96. He was the first black player for the Giants, joining the team in 1949. He was inducted into the Hall of Fame in 1973.

Parcells: A Football Life by Bill Parcells and Nunyo Demasio (2014) Whether you follow football or not, you know the name Bill Parcells. He is a Hall of Fame coach with a big personality and was always good at providing a good audio clip when talking to the media. Wouldn’t it be interesting to get a behind the scenes look at this complex man and what makes him tick? You have your chance now, as you follow him from his upbringing in northern New Jersey to the day he was inducted into the pro football Hall of Fame.

In Parcells: A Football Life, you will get a behind the scenes look of Duane “Bill” Parcells and his life and career in football. Stories like how standing up to a neighborhood bully as a child shaped his conviction to be confrontational, as it clears the air. You’ll also hear about his friendships with such men as Bob Knight, Jerry Jones, Leon Hess and many, many others. You’ll hear about a game early in the career of Knight, when he was coaching at Army, and as they were leaving, Parcells, there supporting his friend as a fan, punched out a fan trying to hit Knight. Then Knight and his team form a protective “bubble” around him as they leave the gym and the police looking for him. There are many many other good stories in this book, good luck trying to put it down!

Baseball is all about history, and when one becomes attached to a particular baseball team, the history of that franchise becomes almost as important as his own family tree. Those who are fans of expansion teams are somewhat fortunate in this regard; they don’t have as much to learn and absorb as those who become rabidly obsessed with franchises that have been in existence for a century or more. Fortunately, there are books such as The Giants Baseball Experience to help one catch up in short order.

Starting with the nineteenth century evolution of the team in New York and going all the way through the recent twenty-first century triumphs, author Dan Fost gives readers a snapshot of each season, including the team’s won-loss record, finish in the standings, highlights, and an overview of the most important players. And the Giants have had a wealth of important players throughout the years: Christy Mathewson, Carl Hubbell, Juan Marichal, and of course the “Say Hey Kid” Willie Mays, one of the most important in all of baseball history. Besides the individual seasons and players, other topics discussed include the various ballparks the team has called home, trades of major impact, the 1989 World Series earthquake, and of course the move from New York to San Francisco. Each decade is treated with a section called “The Record Book,” showing the statistical leaders of each season, award winners, All-Stars, and Fost’s “All-Decade Team,” sure to cause some arguments among the most devoted fans (for instance, why was Rick Reuschel left off the team of the 1980’s?). Photographs and images of baseball cards and other memorabilia grace nearly every page of this colorful volume.

The Giants Baseball Experience is the ultimate guide to all things orange and black, and Fost has done a wonderful job capturing the essence of the franchise. This is an excellent addition to any baseball fan’s personal library, especially those whose heart belongs to San Francisco.

I have had the movie Big Fan sitting in my Netflix queue as long as I have been a Netflix subscriber. Last night, I finally clicked “play.”

Starring Patton Oswalt (“King of Queens”) as Paul, an overweight, underachieving New York Giants rooter, Big Fan explores the irrational mind of an obsessed fanatic even after he is physically assaulted by the athlete he most admires. His family (including his brother, a personal injury lawyer) is against him, and he is taunted on late night sports talk radio by an Eagles fan who calls himself “Philadelphia Phil” (portrayed by the extremely talented and underappreciated Michael Rapaport). In the end, Paul gets his revenge on Phil, but not without consequences.

This is not slapstick comedy. It is a dark movie, one that may make the devoted sports fan question the rationality of his own allegiance to his team. How much do you love your team? How much are you willing to personally sacrifice to ensure that they have the best chance of winning?

A solid movie, well written, well directed and well acted. Oswalt is a winner playing the pitiful loser. This is a movie every sports fanatic needs to watch.

TTM Success…from about a decade ago: Bobby Thomson

Much like the Sparky Anderson autograph posted yesterday, I don’t remember when this was sent or received. I also had a card signed by Bobby Thomson. I thought it was a nice touch adding the date of the game on this photo, even though I didn’t ask for an inscription.