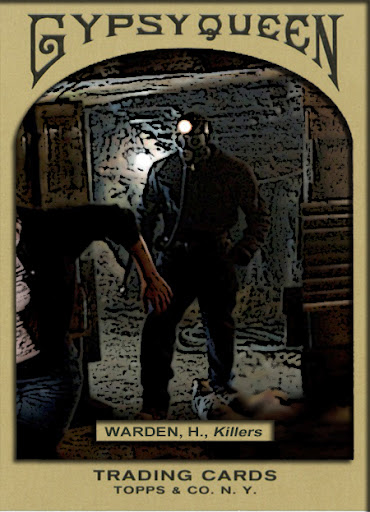 Sorry. If you haven’t seen the movie already, you probably won’t anyway. And the original 1981 film is better than the remake…with a different killer even.

What is it about baseball card collectors and horror movies? I’ve noticed over the past few days that several card bloggers are also horror fans, and I’m no exception. Steve over at White Sox Cards has pulled out some of his horror flicks and plans to watch them over the next few weeks, taking the idea from the MLB Collector blog, which started a “Horrorfest” earlier this week.

One of the gifts I received for Christmas was a $60 Best Buy gift card, which I promptly used to bolster my horror collection. The first thing I picked up was “Legends of Horror,” a 50 movie collection on 12 discs for only $20. The names found in this collection are truly legends: Bela Lugosi, Alfred Hitchcock, Boris Karloff, Christopher Lee, Vincent Price. Then I grabbed a copy of “The Breed,” which I picked up because of Wes Craven’s name on the package. It turns out that it was “A Wes Craven Production,” and he had no other part in the making of this movie. At $14.99, it was the most expensive single movie I bought. It wasn’t a bad show, but not something I would have spent that much money on had I already seen it. Next was “The Ring” for $6.99. This movie just gives me the chills. I love watching it just before going to bed and still have the tingly feeling in my head when I lay down. It makes for some very interesting (and frightening) dreams. Another $6.99 deal was “Urban Legends Final Cut”, which I believe was a sequel to “Urban Legend.” This movie was not very exciting, but I did watch it to the end. I will probably never watch it again. Finally, for $9.99, I got this double feature:

Bad acting and cheesy plotlines make these two instant classics in my mind. I’ve already watched “My Bloody Valentine” twice since purchasing it, and although I’m sure the remake will mangle the campiness of this original version, I’ll probably still try to find a theater around here that is showing it. “April Fool’s Day” is another fun and cheesy production from the 1980s, and it was also remade last year (on a straight-to-video release which I haven’t seen yet, starring Scout Taylor-Compton, who played Laurie Strode in Rob Zombie’s version of “Halloween”). All in all, I think I did pretty good in my quest…55 movies for $60.

I’m not in a horror mood tonight, though, so I’m watching the 1975 World Series Game 6 which I checked out from the local library. I also have Game 7, which I’ll probably watch tomorrow night. One of the greatest Series ever played, with Game 6 probably being the most exciting ever, even though the Reds lost it in extra innings. It’s interesting to watch Luis Tiant’s windup, and it’s fun to watch the Big Red Machine which I never had the privilege of seeing in person. I was born just days after the Reds won Game 7, so obviously I was too young to remember the 1976 Series against the Yankees and Tony Perez was shipped off north of the border shortly afterward. How great could that team have been if it hadn’t been for the dismantling of it. Bench and Concepcion were the only members of the starting eight to finish their careers exclusively with the Redlegs (although I have this faint memory of Davey going to Spring Training with the Angels in 1989…can’t find any verification of that on the web anywhere…am I crazy, or is my memory correct?).