I hope you have enjoyed the Horror Fun Cards as much as I enjoyed creating them. Some of them didn’t turn out as I would have liked, while others (including today’s card) I was quite proud of. What was your favorite? See them all again by clicking here.

Hope everyone has a great night of trick or treating and apple bobbing tonight! Don’t forget to check the candy wrappers for tampering before digging in!

A conversation with Chris Zephro, Trick or Treat Studios

Chris Zephro saw a problem, and decided it was up to him to fix it. Unsatisfied with the quality of Halloweeen masks found in seasonal stores, Zephro decided to do something about it. Connecting with sculptor and friend Justin Mabry, founder and president of Nightowl Productions, Zephro created Trick or Treat Studios in 2009. Zephro said it was “a good opportunity for high-quality with retro-vintage feel at a fair price.”

Zephro and Mabry’s friendship started years before Trick or Treat Studios came into existence. A fan of Mabry’s work at Nightowl, Zephro collected his masks and began talking to him on the telephone for hours on end. It was years before they even met face-to-face; Zephro lives in California, Mabry in Mississippi.

The business relationship made sense. “I thought there was a niche out there,” said Zephro, “an opportunity for some retro-vintage designs that I liked when I was a kid in the ’70s. My business acumen, Justin’s sculpting skills, it could work.”

Trick or Treat Studios, already a trusted name in the industry, is ready to make an even bigger splash in 2012 with officially licensed masks of some of the genre’s biggest names. Zephro just signed a deal with Universal to produce the alien from They Live and Gunther from Tobe Hooper’s Funhouse, and will continue producing ToxicToons masks. “(Licensing) is just going to expand and expand,” Zephro said.

The biggest license Trick or Treat Studios has secured to date is Michael Myers from Halloween II. An entire underground market was created for Michael Myers masks because of the poor quality of the official Halloween mask. Zephro mentioned creating a mask based on the second movie in passing, and Universal agreed. “The wheels turned faster than you can possibly imagine.”

Two masks will be available in July this year: a standard issue, and a “blood tears” version. “You cannot do it without the blood tears,” explained Zephro. “The first edition is how the mask looks through the majority of the film. The blood tears version is from the end of the movie when Jamie Lee Curtis shoots him and the blood starts pouring down his face. It’s just too cool!”

The Halloween franchise holds a special place in Zephro’s heart. “I remember it from my childhood because my dad was vice president of distribution for Paramount and was really good friends with the producer. The film was too low-budget for Paramount, so they ended up distributing it themselves. But I remember seeing it before it came out when I was six or seven years old.” It may have been the first horror movie he ever watched.

Several of Trick or Treat Studios’ sculptors will be on hand at Monsterpalooza and HorrorHound’s Mask Fest this year. Zephro promised, “We’re just getting started! The Myers mask has opened a lot of doors to a lot of cool upcoming licenses.”

To purchase or pre-order a mask, visit the Trick or Treat Studios website!

I was recently alerted to a new mask coming from Trick or Treat Studios, and I knew I had to share with you:

Trick or Treat Studios and Universal Studios is proud to present the Official Halloween II Mask!

This mask is an identical replica of the mask worn by one of the most famous movie serial killers of all time, in Universal’s Halloween II, a spine-tingling dark ride into the scariest night of the year.

The Official Halloween II mask was sculpted by our Art Director, Justin Mabry, and was based on numerous screen shots from Halloween II to make it the most screen accurate mask ever released.

So order your Official Halloween II mask, get yourself some coveralls and a nice replica butcher knife and give your friends the ultimate scare this Halloween!

To see more photos and pre-order your mask, visit the Trick or Treat Studios website! 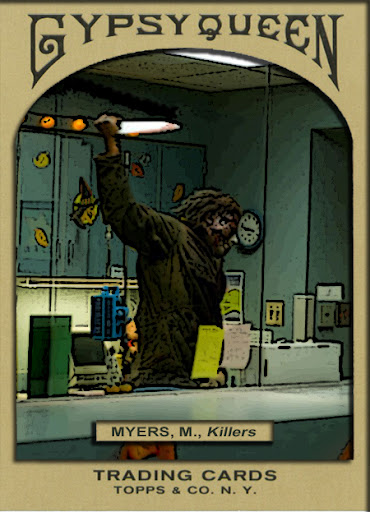 Who would win in this battle: Jason Voorhees vs. Freddy Krueger vs. Michael Myers? Would an alliance be formed between two against another? Or would it be a free-for-all, every-monster-for-himself fight? What about the classic Michael Myers vs. Rob Zombie’s verison? Tyler Mane is a big dude, and very brutal when he puts on that mask. I’m not sure John Carpenter’s original vision of Michael would stand a chance.

One week until Halloween…

I can’t believe it’s almost here…my favorite time of year! When the ghosts and goblins come out to play, and not even garlic keeps vampires away. Halloween! Halloween! It’s almost time to scream!

Tyler Mane (Michael Myers) called me on the phone recently. It was pre-arranged, a segment for the Hard Rock Nights radio show…he hasn’t been hired by a telemarketing firm. He has actually started his own movie production company, and will be branching out from the Michael Myers role. Check out the conversation I had with him…

This was my first non-music guest on the program, a horror-themed extravaganza. I thought it went pretty well. Over the past year, I have talked to some pretty amazing people. On the Hard Rock Nights site, you can see a list of them in the right-hand column, and listen to most of them by clicking on the names. There are a few that I don’t have uploaded yet, but I’m working on it.

Tyler Mane is the special guest on the next episode of Hard Rock Nights, October 23-29. Mane is best known for his role as Michael Myers in Rob Zombie’s Halloween and Halloween 2, and has just started his own production company which will begin filming the horror film Penance Lane next year.

This week’s Hard Rock Nights is a special horror-themed edition to celebrate Halloween. Tracks from Iron Maiden, Rob Zombie, Dokken and more that feature some connection to the holiday or horror will be featured, including Alice Cooper’s brand new “Keepin’ Halloween Alive.”

Hard Rock Nights can be heard on over a dozen radio stations throughout the week. Click here for a complete list of stations and times.