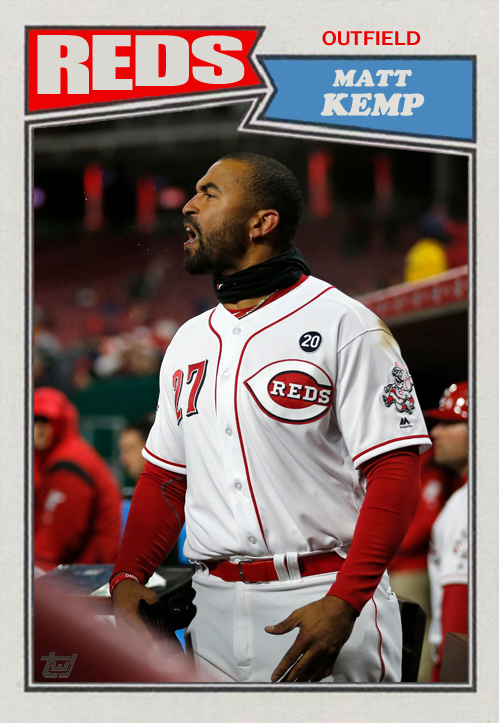 Another new face to the Reds this year is Matt Kemp. He is hitless so far in Cincinnati, but any day now that mojo will come back and he will lead these Redlegs to the top of the division…the league…the world!

Yes, Cincinnati, there is a Santa Claus…

…and he works for the Los Angeles Dodgers.

The Reds completed one of the biggest trades in recent franchise history when they acquired Yasiel Puig, Alex Wood, Matt Kemp, and Kyle Farmer from Hollywood for a couple of prospects and Homer Bailey‘s contract. Baseball-reference.com was quick to update the first three’s mugshots, too. 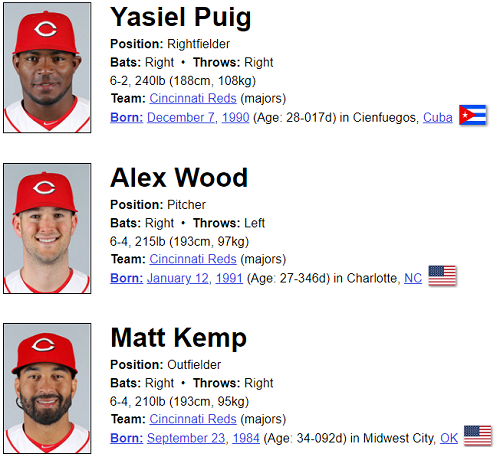 Puig has already updated his Twitter emoji and Snapchatted a selfie wearing a black Reds hat over the weekend.

Merry Christmas everyone! Thank you to all my friends in the blogosphere and on Twitter that have traded cards and communicated with me in 2018. I’m looking forward to a great 2019 on the field and on the blog!

I’m having trouble wrapping my head around this.

For the past couple of years, Topps has run a pretty cool promotion using randomly-inserted code cards in baseball card packs. You could enter the code on a website, unlock a vintage Topps card, and if you liked the card, have it delivered to you. I was happy that they were doing this again in 2012…except they weren’t.

I went to golden.toppscards.com and entered my first code. This is what popped up on the screen:

Not a huge Derek Jeter fan, but I won’t turn it down. But wait…

Didn’t Topps try this kind of thing already with toppstown.com? Or was that just for kids?

This is just another strike against 2012 Topps. I know there are collectors who love it (and I’m not hating the design…I think it’s fairly nice other than the foil), and there are those who hate it (I do not consider myself in this camp at all). The Golden Giveaway just seems extraneous.

I have one more code, so let’s go ahead and see what that spits out…

Lookie there, it’s the guy that should have won the 2011 NL MVP award, Matt Kemp!

Is Ryan Braun going to do the right thing and give it up, or is he still sticking to his “bad test” hogwash?

This must be voodoo.

That’s the only way to explain it. How else could an American League player, who has never played a single game for a National League team, win the National League Most Valuable Player award? It just doesn’t make sense.

Ryan Braun has played 729 games over five major league seasons, all for the Milwaukee Brewers. He never played for the Mets, or the Braves, or the Reds, or the Pirates, or the Dodgers, or the Giants, or the Astros, or any of the other National League teams. So how is he named the National League MVP?

Is this because of interleague play? The lines have been blurred so much that the awards are just given out to whoever the voters want to give it, regardless of what league they are actually in?

Even the last Milwaukee Brewer to be named the MVP, Robin Yount, was given the proper league’s trophy in 1989. He was the American League MVP (even if he didn’t really deserve to be).

I just don’t get it. And I blame Bud Selig.

My condolences to Matt Kemp. You, sir, were robbed.