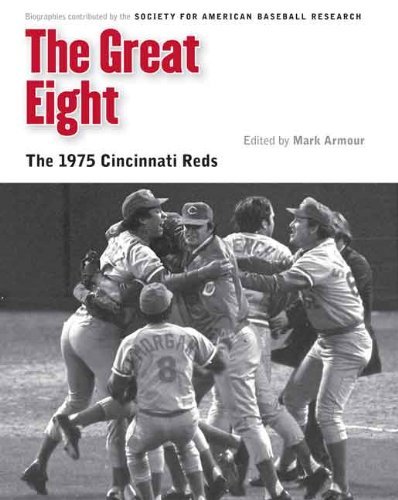 When your favorite baseball team is struggling on the field, it is comforting to reminisce about past glory, especially when the past includes one of the greatest offensive lineups to step onto the diamond. The 1975 Cincinnati Reds boasted a lineup of three Hall of Famers (Johnny Bench, Joe Morgan, and Tony Perez), two others that should be (Pete Rose and Dave Concepcion) and a Hall of Fame manager (Sparky Anderson). Add to that a dazzling defensive center fielder (Cesar Geronimo), a consistent hitting right fielder (Ken Griffey), and a slugging left fielder (George Foster), and you have offensive output that ranks among the greatest of all-time.

But the 1975 Cincinnati Reds went far beyond the starting lineup, as explained in The Great Eight, one of the latest offerings from the Society for American Baseball Research. There were the men behind the scenes, such as Bob Howsam and his squad of scouts. Anderson’s coaching staff (George Scherger, Alex Grammas, Larry Shepard and Ted Kluszewski) never receives the credit it deserves by the average fan. The “adequate” pitchers, including Jack Billingham, Don Gullett, and Gary Nolan, are often forgotten when discussing the Reds championship teams of 1975 and 1976. And all of the role players, from Dan Driessen to Ed Armbrister to Doug Flynn—all of these and more are recognized and profiled in The Great Eight.

Month-by month timelines featuring the headlines of each game as reported in Ohio’s Springfield News are interspersed between groups of brief biographies. Other articles speak to the importance of moving Rose to third to make room for Foster in the lineup, a comparison between the 1970s Reds and the 1940s-50s Brooklyn Dodgers, and a look at the franchise in the years after winning it all.

The entire team has never before been this fully investigated. Armour did a wonderful job editing this collection, with contributions from researchers Charles F. Faber, Bill Nowlin, Mark Miller, and Doug Wilson, who is fast becoming one of this writer’s favorite baseball authors. The Great Eight is a worthy addition to the Memorable Teams in Baseball History series, and a must-own for Cincinnati Reds fans.