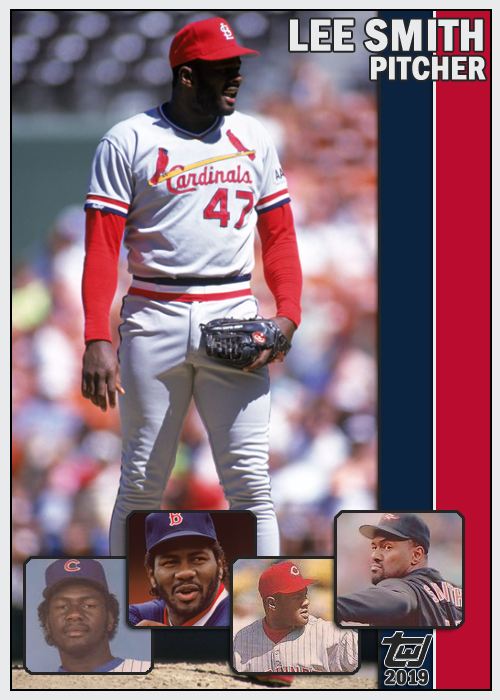 It took far too long for Lee Smith to receive the honor of baseball immortality. After fifteen unsuccessful years on the BBWAA ballot and reaching 50% of the vote only once, the Veterans Committee finally recognized the greatness of the dominant reliever. He will be inducted into the Hall of Fame this summer with Harold Baines, Mariano Rivera, Edgar Martinez, Mike Mussina, and the late Roy Halladay.

Baseball greats get book deals, right? With the Hall of Fame class now set for 2019, I thought I would take a look at books that focus on those players’ careers. I was surprised to find that only on of the six has an autobiography already in print, and only one other has an announced release date for later this year. 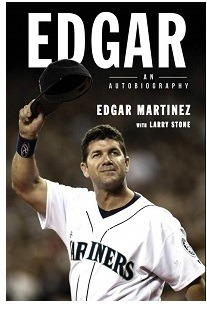 I’m not sure there would be much demand for a Lee Smith tell-all, or even a Harold Baines bio (although I would be interested in that one). Mike Mussina‘s humble disposition will probably prevent an autobiography from him. I heard an interesting story, and I don’t remember if it was on MLB Network’s coverage or elsewhere. Mussina tanked a grade in school so he wouldn’t be valedictorian. He didn’t want the spotlight.

There are a handful of Roy Halladay books geared toward younger readers:

Time will tell if a fuller examination of Halladay’s life will be offered, or if biographies of Smith, Baines, or Mussina will pop up. 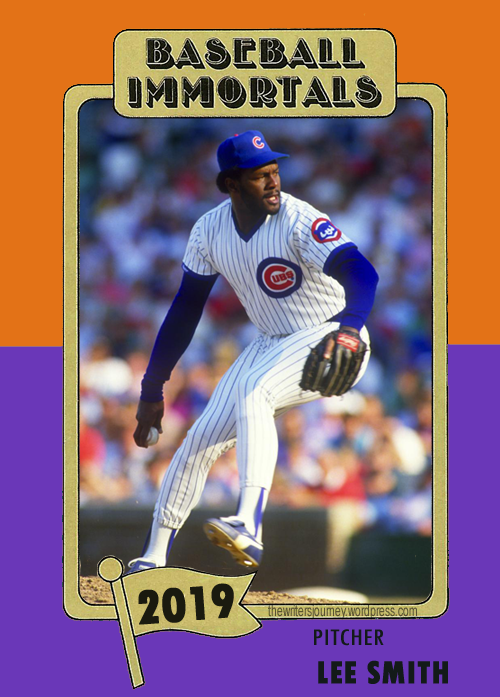 Fifteen (or more) years on the ballot, but not a Hall of Famer

Some of the hoopla surrounding the Hall of Fame vote has died down now, with three players and three managers all set to be inducted this summer. No doubt these individuals recognize what an honor is being bestowed upon them.

That said, not many players have lasted fifteen years. One has to be pretty good, but not good enough, to stick around for so long. Jack Morris joined this illustrious group this year, while Don Mattingly, Alan Trammell, and Lee Smith are likely to be added over the next three years (assuming Trammell and Smith continue to receive greater than 5% support).

Below is a list of the players at each position that survived for fifteen years on the BBWAA ballot; their years on the ballot and highest support are indicated in parenthesis. There are a few guys on this list that I believe should be in Cooperstown; Dale Murphy is at the very top of my list, with players like Dave Concepcion, Ken Boyer, and Dave Parker trailing him. It boggles my mind that Murph has been excluded and I hope the Veterans Committee rectifies his omission when his name comes before them. All of these players had fine careers, and this would make a pretty powerful team, even if none of them are in the Hall of Fame.

Yesterday, the only man in the history of baseball with 600 saves (until Mariano Rivera surpasses him at some point in the next two seasons), Trevor Hoffman, announced he was retiring. The question now becomes one of his place in baseball history.

Only a handful of relief pitchers have been inducted into the hallowed halls of Cooperstown. Goose Gossage (2008), Bruce Sutter (2006) and starter-turned-reliever Dennis Eckersley (2004) are the most recent, while Rollie Fingers skated in on his second ballot way back in 1992. Should Hoffman join them? Or is the recent shunning of Lee Smith indicative of the way voters will treat the (for now) all-time saves leader?

Before Hoffman, starting in 1993, all the way through 2005, Smith was on top. When his name first appeared on the BBWAA Hall of Fame ballot, he received 42.3% of the vote. A very solid number for his first year, most expected him to make big gains and be ushered in within a few years. But that didn’t happen. His percentage has gone up and down, but has remained in the 35-45% range with the exception of 2010, when he was able to draw just over 47%. His percentage in the most recent tally? 45.3%. It looks more and more unlikely that Smith will be immortalized in Cooperstown by the BBWAA, and his fate may be left to the Veteran’s Committee.

Prior to Smith, the all-time leader in saves was Jeff Reardon, who overtook Fingers in 1993. He didn’t hold the title long, as Smith passed him in 1994. How did the BBWAA reward Reardon’s longevity and effectiveness? He was one-and-done on the Hall of Fame ballot in 2000, albeit only one vote shy of getting a second chance. Out of 499 ballots, “The Terminator” was named on 24 for 4.8%.

With Mariano Rivera just 42 saves away from the all-time lead, it’s doubtful Hoffman’s name will be at the top with he appears on the ballot. Will the writers remember his dominance? For that matter, was he dominating?

It will be a few years before these questions will be thoroughly examined and answered. We’re too close to his career right now to make that call. But it does give one something to think about. Whatever the case, he had a very good career for an 11th-round draft pick.

Where is the support?

Yesterday I wrote about Jim Rice, Dale Murphy, and Dave Concepcion’s exclusion from the Hall of Fame. There are a number of other players on the ballot who are considered borderline candidates for the Hall. Some of them have been gaining support over the years, while others have not.

Andre Dawson, on the ballot since 2002, has risen from 45.3% to 65.9% this year. The Hawk became nationally known while playing for the Cubs in the late 1980s after spending the first part of his career in Montreal. He had a monster year in 1987, hitting 49 home runs and winning the MVP while playing for the last-place Cubs. He finished his 21-year career with 438 round-trippers, a more than respectable number for the pre-steroid era. (I’m really starting to hate that phrase.)

Bert Blyleven first appeared on the Hall of Fame ballot in 1998, receiving a paltry 17.5% of the vote. Blyleven has gained a great deal of support, finishing with 61.9% in 2008. The case for Blyleven is two-fold: he won a lot of games and struck out a lot of batters. In the modern era, the only eligible player for the Hall with more wins is Tommy John. Blyleven is also fifth on the all-time strikeouts list, with more K’s than Tom Seaver, Don Sutton, Gaylord Perry, Phil Niekro, Fergie Jenkins, and Bob Gibson (all HOFers). The case against him is his poor winning percentage. While he won 287 games, he lost 250.

Lately, relief pitchers have been getting a serious look by the voters. Goose Gossage was elected this year, Dennis Eckersley was inducted in 2004, and Rollie Fingers in 1992. Lee Smith is still trying to get his due. Despite being the all-time saves leader for retired relievers (Trevor Hoffman passed him in 2006 to become the record holder), Smith has gained very little support among Hall voters. In 2003, his first year on the ballot, Smith received 42.3% of the vote. This year, 43.3% voted for him. Evidently there are some who thought he was Hall-worthy five years ago, but they have been unable to convince their peers of that opinion.

Next on the list is Jack Morris, the most dominant pitcher of the 1980s. The former Tiger ace’s support has increased over the years, from 22.2% in 2000 (his first year of eligibility) to 42.9% on the most recent tally. Morris was a five-time All-Star, starting the game three times for the American League. Five times he finished in the top five voting for the Cy Young Award.

What about Tommy John? On the ballot since 1995, he has never received more than 30% of the vote, but has only once received less than 20%. He has one more win than Blyleven, but his strikeout totals are far less (47th on the all-time list). He received serious consideration for the Cy Young award in 1977 and 1978 with the Dodgers, and 1979 and 1980 with the Yankees.

One to watch in future elections is Tim Raines. He received 24.3% this year, his first year on the ballot. Raines spent the first decade of his career in Montreal, making it that much more amazing that he was as popular as he was. He was an All-Star every year from 1981 through 1987, starting in left field in 1982 and 1983. He was known for his speed on the basepaths, leading the National League in stolen bases from 1981 to 1984 and five times finishing in the top four. Raines is fifth on the all-time stolen bases list behind future Hall of Famer Rickey Henderson and current HOFers Lou Brock, Billy Hamilton, and Ty Cobb.

Harold Baines, never considered a viable candidate for the Hall, barely received enough votes to stay on the ballot another year. Ten other players will not appear on the ballot next year, failing to garner 5% of the vote: Rod Beck (1994 NL Rolaids Reliever of the Year), Travis Fryman (five-time All-Star), Robb Nen (15th on all-time saves list), Shawon Dunston (#1 overall pick in the 1982 draft, one of my personal favorites, and a great autograph signer through the mail), Chuck Finley (23rd on all-time strikeouts list), David Justice (1990 NL Rookie of the Year), Chuck Knoblauch (1991 AL Rookie of the Year), Todd Stottlemyre (2000 Branch Rickey and Lou Gehrig Memorial Awards winner), Brady Anderson (smacked 50 homers in 1996, but never got 25 in any other season), and Jose Rijo (1990 World Series MVP; never won more than 15 games in a season). Only Anderson and Rijo failed to get any votes at all.