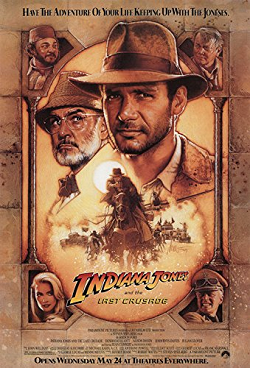 35 Years Ago Today: Indiana Jones pushes the boundaries of the “PG” rating 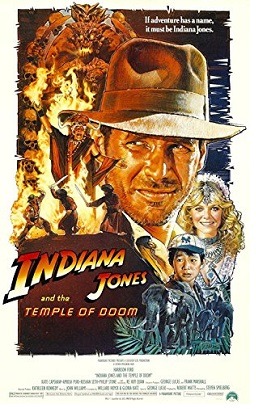 If adventure has a name…it must be Indiana Jones.

Indiana Jones and the Temple of Doom burst into American movie theaters on this date in 1984. The film received heavy criticism at the time due to violent scenes, which led director Steven Spielberg to suggest a new rating between “PG” and “R.” In July, the Motion Picture Association of America introduced the “PG-13” rating.

Harrison Ford reprises his role as the titular character in the second installment of the Indiana Jones series, a prequel to the 1981 blockbuster Raiders of the Lost Ark. Temple grossed over $333 million worldwide, and was the third highest-grossing film of 1984, behind Beverly Hills Cop and Ghostbusters. Wow, 1984 was a great year for movies.

The film featured a score by the inimitable John Williams.

If I were forced to rank the Indiana Jones movies thus far, I would have to rank them in the order they were released. Raiders of the Lost Ark is far and away the best, although I have to say I have enjoyed them all. Yes, even Kingdom of the Crystal Skull.

A quick update on the whole George Lucas 2012 fiasco…

According to a Lucasfilm rep, it was all a big joke, just like George’s daughter Katie said. But (and it’s a big but, just like Sir Mix-A-Lot likes)…

“…he is an adamant believer that the world is flat, that Stonehenge was built by aliens, and that the sun revolves around the Earth. These are among the many subjects he commonly discusses at length with Elvis, who he’s going to digitally insert into Indy 5 along with a roster of famous dead actors.”

That is per an e-mail that Lynne Hale, Lucasfilm rep, purportedly sent to Wired.com.

My 9-year son Joshua and I went to Moeller High School today, where they are holding a baseball card show (no, make that extravaganza) this weekend. Here’s a small sampling of what we grabbed…

I have several of these team checklists from the 1974 set, but I didn’t yet have the Reds (and never really expected to). But there it was, and half-price! It had to be mine.

Yes, Moeller is in Cincinnati. There were Reds cards everywhere. I was on Reds overload. But I restrained myself, and only purchased the stuff that I figured I would not get in those blind trades I’m working on (four boxes down, one to go…should only be a few more days before I can get that all figured out, or a week at the most). If my research is correct, this is a 1975 Hostess card. Poorly cut I might add. But I think it was only fifty cents, so I’m not going to complain.

I love Reds cards, and I love art cards, so a Reds Diamond King is a no-brainer, especially if it’s a Hall of Famer (best catcher ever?) and only costs a quarter. That’s right, folks, this puppy was mine for one shiny quarter. It might have been a little grimy, actually. In any case, I’m a weiner. I mean a winner.

To the untrained eye, this looks like an off-center 1975 Topps George Foster card. Au contraire, as they would say in O-Pee-Chee territory. Yes, this peachy card is the northern counterpart to our All-American Topps issue from 1975. I think this was a half dollar.

I only found one dealer that had cheap wax, so I was a bit disappointed. I ended up buying only six packs from him ($2). We made several rounds around the gymnasium looking for more, but I pretty much gave up after the first lap. When we finally decided to leave, I had several dollars still burning a hole in my pocket, so I was ecstatic when I noticed several large boxes sitting on the floor under one of the dealer tables with the sign “3 Packs for $1.” Yeah, under the table, like I’m going to look there. I had my son sit down right away and instructed him which packs to pick up, and how many of each. We ended up with 30 more packs in the bag, and the dealer had a slightly crumpled $10 to put in his pocket. Out of all those packs, I was able to pull 20 Reds (including the Dibble above) and about 30 other cards (Mattingly, Rickey Henderson, Nolan Ryan, etc.) that I’ll be keeping as well. The rest will be sorted out into the team stacks and traded away.

I wasn’t the only one buying cheap wax, though. Joshua decided to buy some packs of Raiders of the Lost Ark (from 1981) and Teenage Mutant Ninja Turtles (from 1989). The Indy cards are actually pretty cool, and if the same dealer is at the show next month, we might get some more (at 6 packs for $2, you can’t go wrong, am I right?).

But really, the reason we went to the show today was to meet the Cobra. The autographs were $15 a pop, but looks so nice on his 1974 rookie card, no? Joshua had a 1988 Topps card of Parker and that is what he got signed.

All in all, an enjoyable trip…and the afternoon was just as fun ripping open packs. Yes, all 36 packs (plus Joshua’s 6 non-sport packs) are already open.

Coming to a theater near you…

There are four movies that I’m really excited about this year. Two are comic book movies, which is no surprise since I’ve loved every comic-related movie I’ve seen so far (except for the Hulk). Another is a continuation of a great early-1980s movie franchise, and the fourth is a sci-fi flick with some big names. Er, I guess it’s sci-fi. Maybe action-adventure? Anyway…

Jumper looks really cool. Plus Samuel L. Jackson is in it. And Hayden Christensen (you know, Mace Windu and Anakin Skywalker/Darth Vader from the Star Wars prequels). And some other big names, but none that I care about. I love the concept of teleporting from one location to another, kind of like Sliders or Quantum Leap, but they’re not traveling to alternate realities or back in time…just from one location to another. I’ve had dreams of doing this myself. It just seems like a totally cool ability to have, not to mention the amount of money you would save on gasoline. The movie opens next Friday, and if I have the money I might check it out since I have the night off work.

Iron Man was awesome in Marvel’s Civil War mini-series last year, and the movie looks pretty cool too. I’m one of the few who enjoyed the Fantastic Four movies (yes, both of them), and that was with limited knowledge of the franchise before seeing the movies. Same with Iron Man. Outside of Civil War, I know nothing about him, so I’m looking forward to the movie to learn more about this guy.

The Dark Knight is a movie that I was looking forward to before Heath Ledger’s untimely demise, so don’t count me among those who will be seeing it just for his sake. I’m a huge Batman fan, all the way back to the 1960’s version with Adam West. I remember watching reruns of that series on Nick at Nite growing up. Batgirl was a hottie, that’s for sure. The movie franchise took a wrong turn in the 1990s, but the movies are still watchable. In some ways, they were a throwback to the West era. But with the new Christian Bale franchise, Batman returns to the dark origins of the comic. If you haven’t read Frank Miller’s comic The Dark Knight Returns, do yourself a favor and check it out from your local library. It should be in the graphic novels section. This one isn’t being released until July, so you have plenty of time to read the comic.

Indiana Jones and the Kingdom of the Crystal Skull is the fourth movie in the series, 24 years after the third installment. I was a huge Indy fan in the early 80s, and I’m really looking forward to how they tackle this one. Harrison Ford is definitely getting up there in age, but he is such a good actor I have no doubt he can pull it off. We’re looking at a May release on this one. Again, if you haven’t seen the first three movies, go to your local public library and check them out. A great action-adventure series.