30 Years Ago Today: The Crypt Keeper begins to tell his tales on HBO 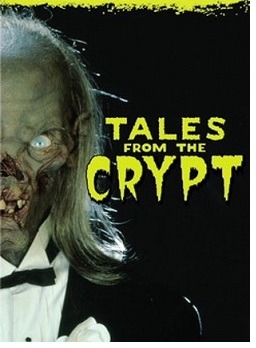 Tales from the Crypt, the horror anthology television program, debuted on HBO on June 10, 1989. I did not have HBO growing up, so it was not until much later that I saw a few episodes. As a youth, I was more familiar with George A. Romero’s syndicated Tales from the Darkside.

Tales from the Crypt was based on a series of comics produced in the 1950s, and most of the storylines came from those books. The program lasted for seven years and resulted in many related projects, including feature films, a Saturday morning cartoon, a game show for kids, and three music compilations.

The first album is a soundtrack from the series, including music from Danny Elfman, Jan Hammer, and Ry Cooder. The second is Christmas-themed, called Have Yourself a Scary Little Christmas, with inspired music such as “Deck the Halls with Parts of Charlie” and “‘Twas the Fright Before Christmas.” The third—Monsters of Metal—featured a mix of hard rock favorites by bands such as Black Sabbath, Pantera, and Dio.

The television series is not currently included for free on any of the major streaming services, but you can buy the complete series from Amazon. If you prefer to read the comics that inspired the show, there are several anthologies available as well.

Tags: HBO, June 10, On This Date, Tales from the Crypt

By the power of Grayskull!

Scrolling through HBO On Demand this morning, I decided to watch “Hot Fuzz,” dubbed in the synopsis as an “action spoof.” I wasn’t sure what exactly to expect…I didn’t really want a “Scary Movie” type of film, but there wasn’t much else to choose from. I’m glad I hit that play button, because this is one of the best comedy/action movies I’ve seen in a long time.

In brief, there is a hot shot London cop who is making his colleagues look bad, so the police force…sorry, police service…promotes him to sergeant and sends him out to the country. There, he encounters a number of suspicious “accidents” which turn out to be murders. His partner, the dim-witted son of the chief, helps him bring the bad guys (which includes his father) to justice through a series of high-action events in the style of “Bad Boys II” and “Point Break,” two movies which are referenced through “Hot Fuzz.”

OK, so I’m really bad at making this movie sound good. But it is. There is a ton of dry British humor throughout, which makes the movie all that much better. I had never heard of any of the actors, but it was created by the same guys that made “Shaun of the Dead.” Maybe that will be enough reason for you to check out “Hot Fuzz” the next time you have a free night.

Coming out of the coffin

True Blood debuted last Sunday night on HBO. It’s the story of vampires making themselves known to the world at large. Directed by Alan Ball, who previously worked on Six Feet Under, the series stars Anna Paquin (best known to me as Rogue in the X-Men movies). Anna is not a vampire (not yet at least), but she is smitten by one. Bill Compton became a vampire during the Civil War when he was 30 “human years” old. So far, after only two episodes, I really like the series. HBO On Demand also has some documentary stuff on vampires in literary and cinematic history, and some behind-the-scenes specials about True Blood.

What do your YouTube subscriptions say about you? I have five channel subscriptions, and they all say what I already knew: END_OF_DOCUMENT_TOKEN_TO_BE_REPLACED

One of the greatest public service announcements ever created:

I first heard about True Blood a couple of weeks ago. It’s a new series premiering on HBO this fall, but no one seemed to know when. Well, here it is: END_OF_DOCUMENT_TOKEN_TO_BE_REPLACED