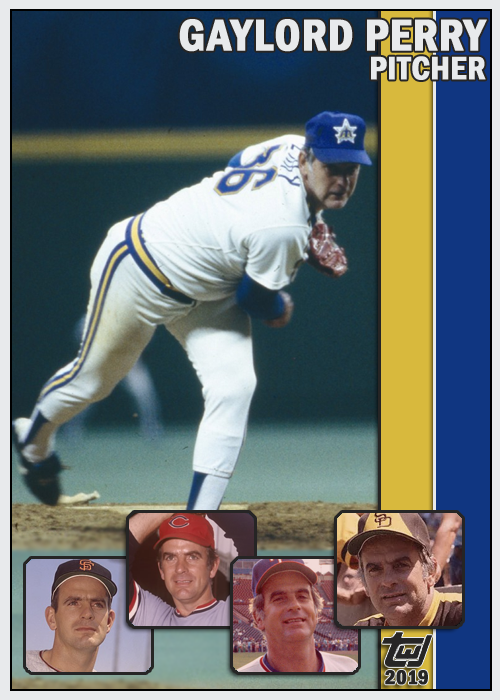 Gaylord Perry was a much better pitcher than people remember. Yes, he used the spitball, but does anyone really care about that? 300 wins, 3500 strikeouts, and the 13th highest career WAR for pitchers. If my math is correct, at the time of his retirement, he was 8th all-time. Since then, he has been passed by Roger Clemens, Greg Maddux, Randy Johnson, Phil Niekro, and Bert Blyleven.

P.S. The Mariners really need to bring back the trident as their primary logo. So much more character and charm than the current borefest they wear. It took three tries for Gaylord Perry to receive the requisite 75% support for the Hall of Fame. He won 314 games and struck out 3534 strikeouts, but his induction was stalled by allegations of using the illegal spitball to achieve these milestones. He was not ejected for doctoring the baseball until his 21st season in the majors. In addition to the spitball, Perry also utilized the “puffball,” described by Sports Illustrated writer Joe Posnanski: “My favorite trick pitch of his was the old Puffball, where he would load up on rosin so that a puff of white smoke would release while he threw his pitches. This was made illegal somewhere along the way (because of Perry, of course), but it’s so awesome — it’s like the sort of thing one of the villains on the old Batman TV show would do.”

Perry is best known for his spitball, though he was not ejected for throwing the illegal pitch until 1982, his 21st season in the bigs. That is perhaps the reason he was made to wait until his third year of eligibility before gaining induction into the Hall of Fame. Perry was the first pitcher in history to win the Cy Young Award in each league (1972 with the Indians and 1978 with the Padres). He compiled a 134-109 record and a 2.96 ERA for the Giants, who retired #36 in his honor in 2005.

How magical are “magic numbers”? (part 1)

Hall of Fame elections are tricky. In the past, if a player had reached certain milestones, or “magic numbers,” he was assured a spot in Cooperstown. With the recent revelation of steroids in the game and the tainting of our precious statistics, those “magic numbers” are now marred with allegations and accusations. Players like Mark McGwire, Roger Clemens, and Rafael Palmeiro are no longer guaranteed admittance into the sacred company.

But I got to thinking, how magic are those magic numbers? For hitters, the magic numbers are 3000 hits and 500 home runs. For pitchers, 3000 strikeouts and 300 wins. How easy is it for a player to get in with those numbers? Let’s take a look, starting with pitchers…

Twenty-four pitchers in the history of baseball have won 300 ballgames. Seven of those guys were inducted by the Veterean’s Committee or the Old Timers Committee, while another four are not yet eligible. The top four were in the very early days of the Hall of Fame, and there was a tremendous backlog of players on the ballot at that time. It’s amazing that Cy Young did not get enough support that first year, despite being the only pitcher in history with more than 500 victories, but at the same time we’re not going to hold it against the voters because they did get it right eventually.

If we eliminate those fifteen names, we have nine guys to look at, mostly in the modern era, with 300 wins: Spahn, Carlton, Ryan, Sutton, Niekro, Perry, Seaver, Grove, and Wynn. Spahn, Carlton, Ryan, and Seaver were first ballot guys (we’re ignoring the vote cast for Spahn while he was still active in 1958, which would not be allowed under current rules). Why were the others forced to wait three, four, even five years, despite 300 wins?

Personally, I look at the career of a player rather than the peak. Sutton, Niekro, and Perry reached the 300-win plateau as well as 3000 strikeouts. Shouldn’t that end the conversation? Alright, I understand the hesitation on Perry…

But for Sutton and Niekro, there should have been no debate. Sutton only had one 20-win season; Niekro had three. Sutton had a nice 5-year peak in the 1970s with several top-five finishes in Cy Young voting and All-Star appearances. Niekro spread out his success more, with Cy Young support and All-Star honors in three decades. In the end, I suppose both were seen more as compilers than dominant forces, but credit has to be given for longevity, doesn’t it?

Despite 300 wins and 3000 strikeouts, both were forced by the BBWAA to wait five years before enshrinement.

Now look at a few other players that reached 3000 strikeouts in their career, but did not reach the 300-win mark.

We all know the struggles Blyleven faced. Just one 20-win season, two All-Star games, three top-ten finishes in Cy Young voting. Like Sutton and Niekro, he was seen as a compiler, and he fell just short of 300 victories. Jenkins battled the stigma of a cocaine-related arrest which may have forced him to wait a few years for induction.

So back to the original question, how magical are the milestones of 300 wins and 3000 strikeouts? No eligible pitcher has been denied induction, but neither are the marks automatic first-ballot guarantees.