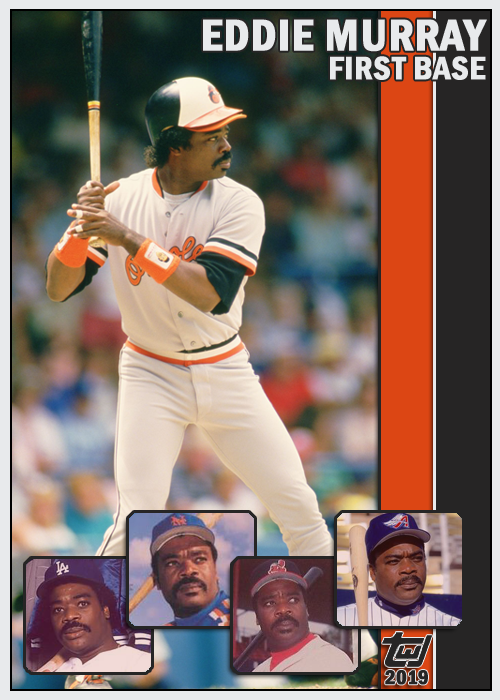 Is Eddie Murray the most underrated Hall of Famer? 500 homers, 3000 hits, eight All-Star Games, five consecutive top-five finishes for the AL MVP. How is he so often forgotten when talking about the greats of the past 40 years? Steady Eddie Murray is one of the forgotten stars of the 1980s. He is one of only five players to collect 3000 hits and 500 home runs (Hank Aaron, Willie Mays, Rafael Palmeiro, and Alex Rodriguez are the others, with Adrian Beltre possibly joining the group in 2018). Murray, though instantly recognizable, only appeared in eight All-Star Games (seven with the Orioles, one with the Dodgers), and never won an MVP award (though he finished second twice). Despite being overlooked much of his career, the BBWAA ushered him into the Hall of Fame the first time his name appeared on their ballot in 2003.

Who is the greatest first baseman of all-time?

I had no idea what to expect when I plugged in the numbers for first basemen. I couldn’t even guess at a top five list, except to say that Lou Gehrig would likely be near the top. When all the statistics were plugged into the spreadsheet, Gehrig (294.01) was near the top, but not at the #1 position. That spot was claimed by Jimmie Foxx (294.89), who beat out the Iron Horse by .88 points. This was easily the closest contest at any position.

However, it is likely that the #1 position will be claimed by another player in the very near future. Albert Pujols (285.0), with only twelve years in the majors, is at #3 on the list, behind both Foxx and Gehrig by less than 10 points. Just one monster season with an MVP award could push Pujols to the top.

Pete Rose (253.18) falls in at the #4 spot. Now, before you start yammering on about how Rose spent most of his time in the outfield, let me point out that he split that time between the three outfield spots. Rose played more games at first base than he did in left field, right field, or center field. Thus, he is included here for the sake of putting him somewhere. That is the same reason Joe Torre was included among the catchers yesterday. Had Torre been thrown in among first baseman, his 206.33 score would put him at #15 all-time, just below Willie McCovey and ahead of Hall of Famers Roger Connor and Orlando Cepeda.

The number five guy threw me off. I knew Eddie Murray (248.5) was great, but the fifth best first baseman ever? Who else saw that coming? For a long time he was an American Leaguer overshadowed by his teammate at shortstop and then bounced around quite a bit during the second half of his career, so it’s not difficult to overlook him in that regard. But you would think that a member of the 500 home run club would be a little more celebrated by baseball fans. Thankfully, the writers were paying attention and allowed him first-ballot entry into Cooperstown in 2003.

Take away the awards, and again the order gets mixed up and #10 drops off the list. Without awards and All-Star seasons, the top ten reads Gehrig, Foxx, Anson, Pujols, Murray, Thome, Rose, Bagwell, Thomas, and Hall of Famer Roger Connor. On both lists, Tony Perez comes in at #11.

Wagner may be best known today for his famous baseball card, but he was one of the game’s elite players. On the very first Hall of Fame ballot, he tied Babe Ruth for the second-most votes (trailing only Ty Cobb), and is still considered the greatest shortstop to ever play the game. His playing career was in the days before uniform numbers, but #33 is retired in his honor as that is what he wore as a Pirates coach.

It’s no secret that I’m not a huge fan of modern-day baseball. With all the cheats in the game, and so few class acts left, it’s just difficult to retain my interest. But because of the internet, I can relive the days of baseball that I fell in love with.

I started collecting baseball cards in 1985. I got my first complete set in 1986 for Christmas (Topps, of course). And I started learning about the game’s history because of a man named Peter Edward Rose.

You see, when I started following baseball, Rose was chasing Ty Cobb’s career record for hits. That immediately created a strong desire to learn about Ty Cobb, and eventually other old-timers like Babe Ruth, Cy Young, Jackie Robinson, and so on.

And now, when I want to relive the glory days of the 1980s, all I have to do is fire up YouTube. Here’s a clip of Reggie Jackson and Howard Cosell running down the starting lineups, position-by-position, for the 1983 World Series teams, the Phillies (featuring Rose, Morgan, and Schmidt) and the Orioles (featuring Murray and a youngster named Cal Ripken Jr).

I don’t remember the ’83 Series (’86 was the first one I really paid attention to). But it’s cool to look back on it now. Five Hall of Famers in the infield alone…has that happened since?

Oh, that we could see the game played like it was back then…when it was still (for the most part) a game.

My son was showing me some of the cards he bought at the baseball card shop the other day, and one had me stumped. I’m hoping someone out there can help us out. It’s an Eddie Murray card from the 2005 UD Past Time Pennants set, card #25. But I don’t know if it’s the regular issue or the silver, because I am not familiar with the set. So here is a scan, please let me know if you know the difference…