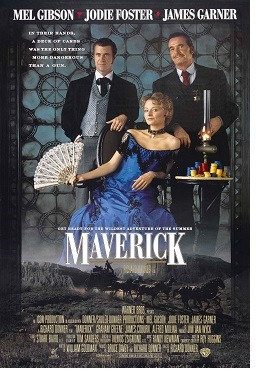 Mel Gibson, Jodie Foster, and James Garner star in Maverick, the western comedy based on the 1950s television series of the same name. The supporting cast was quite good, including James Coburn, Denver Pyle, and Corey Feldman. There were quite a few uncredited guests as well, including director Richard Donner, John Fogerty, Danny Glover, Margot Kidder, and Reba McEntire.

The movie has its moments, but the real treat is the soundtrack, a virtual rundown of the biggest country music names in the ‘90s. Clint Black, John Michael Montgomery, Tracy Lawrence, Confederate Railroad…a ton of talent packed into about 40 minutes of music. Many of the artists featured on the soundtrack also appeared in minor roles in the movie.

Clint Black’s “A Good Run of Bad Luck” is easily my favorite song on the record. It also appears on Black’s own No Time To Kill album. The Maverick soundtrack hit #4 on the Country charts, and #35 on the Billboard 200.