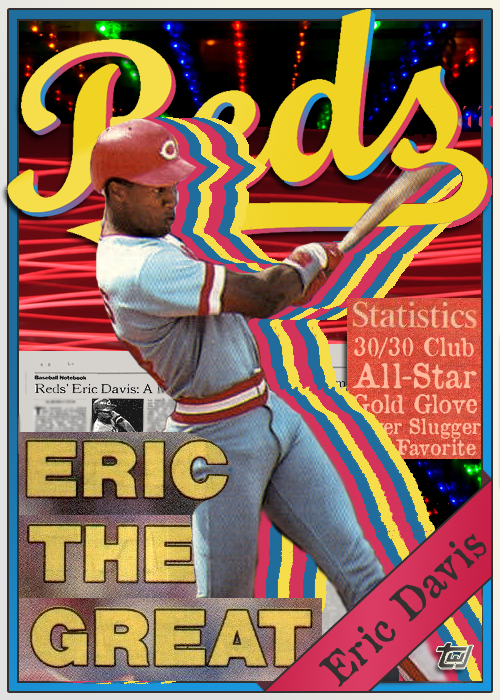 I’m not a huge fan of the Topps “Project 2020” release. Some of the cards are okay, but they’re all overpriced, and the secondary market for these cards is stupid. I’m glad there are no Reds in the set, even though I have shied away from buying much lately at all anyway.

But since it’s all the rage, I thought I would fire up the PhotoShop while watching some Chuck on Amazon Prime. I miss Chuck and Sarah and their weekly adventures. That was such a fun show. But I digress.

Here is Eric Davis, one of the greats of the 1980s Reds. It’s rough around the edges…so it’s edgy, right? It’s art. I said it’s art, so it’s art, even if it looks awful. Because some of those Topps cards look REALLY awful. Some are nice. But some are absolute trash. I’ll let you decide for yourself which cards fall in what category, because your taste is different than mine. Some of the cards, though, barf. Can’t possibly be anyone’s taste.

If you can’t say anything nice…I’m shutting up now. One of the best television series in recent memory, Chuck

made a lasting impression on legions of fans. Now, three years removed from the last episode, an official soundtrack has at long last been released. Tim Jones’ stellar compositions can now be enjoyed by Chuck fans separate from the show, as well as a handful of Jeffster cover songs (“Take On Me,” “Fortunate Son,” “Fat Bottom Girls,” “Leaving on a Jet Plane,” and “Mr. Roboto”). Jones revisits familiar musical themes frequently throughout the score, adapting those themes to various styles. “It’s All Not Work” has an epic, superhero-type feeling to it, while “Mission Time” might bring to mind the popular 1980s television show Miami Vice. “Action Theme” is a fun romp in which the listener can imagine Chuck, Sarah and Casey battling the baddies in the Ring, while “Charlie Foxtrot Shaw” contains the haunting mood music of the enemy.

The only real complaint one might have is the lack of separation between tracks. While the compact disc contains sixteen separate tracks, there are many more songs featured. As an example, “It’s Not All Work” runs nearly ten minutes but is made up of several shorter compositions and could have been divided up into more tracks. Yes, that would have made the tracklisting longer, but it would also be easier to find your favorite pieces. The evil Shaw theme in “Charlie Foxtrot Shaw” does not begin until just over the one-minute mark, after two shorter themes.

There is also the absence of the opening theme, a portion of Cake’s “Short Skirt/Long Jacket,” but this omission is very minor in the grand scheme of things. Tim Jones and Jeffster are the true stars here, and their talents are on full display. Jeffster, the cover band featured Jeff Barnes (Scott Krinsky) and Lester Patel (Vik Sahay), shows off three songs on the CD and two among the digital-only bonus tracks.

I miss Chuck, and I was ecstatic to learn that this soundtrack was being released. Chucksters all over the world should show their appreciation for Tim Jones’ talents by purchasing this excellent compilation of songs from the series.

Is there an awesomer show than @nbcChuck (go ahead and #ff)?

Totally ungrammatical, but I don’t care. Chuck has got to be one of the most entertaining television programs since, I don’t know, Dukes of Hazzard. That’s not to say I haven’t enjoyed other shows…24, Smallville, the first two years of Heroes…but none are as charming as Chuck.

Artist Josh Howard recently shared the above awesomeness via Twitpic, and it’s almost as awesome as Chuck is.