Chipper Jones was the offensive anchor for the Braves during the 1990s and 2000s, playing third base and left field for the most dominant National League team of the era. The 1999 NL MVP was selected to eight All-Star teams in his career, and is ranked sixth among all third basemen by the JAWS system. Jones is only the second #1 draft pick to be inducted into the Hall of Fame, following Ken Griffey in 2016.

Too big for a binder: autographed index cards

In addition to eight standard baseball cards of Greg Maddux that I had autographed through the mail around 1990 are these two index cards featuring Mad Dog’s stickers from some late 80s sticker sets.

Same goes for Will Clark, though his sticker is bigger since he was a bigger star at the time.

I am pretty sure this is Chipper Jones, but there is no picture to go along with the signature. I Googled his autograph and this looks pretty close. I assume I sent this to the minor league club Jones was with at the time; however, I actually have no recollection of obtaining this autograph.

This one is the biggie, and one that I forgot I had until I was sorting my “too big for a binder” items a few nights ago: Bob Feller autographed index card, with a Fleer (?) sticker of the Indians mascot.

Seeing this card again really makes me want to visit the Bob Feller Museum in Van Meter, Iowa. It’s way out of the way of anything else, but I believe it might be worth the trip anyway.

I’m not sure how to store all of these things. At the moment, they are snug in a 500-count box, and I suppose that is where they will stay until I think of a better solution.

Lou Piniella took the mound before the Yankees-Red Sox game.

Rusty Staub tossed the ball before the Mets opener.

Former big leaguer Joe Torre was asked to throw the first pitch before the Reds-Angels game. This one doesn’t make any sense to me since Torre has no connection to either organization.

Brandon Webb was honored by the Diamondbacks.

Bo knows first pitches…Bo Jackson did not wear a jersey when he threw out the first pitch before the White Sox-Royals game in Chicago.

Medal of Honor recipient Army Staff Sgt. Clint Romesha was the Nationals’ choice to throw the first pitch in Washington.

Future Hall of Famer Chipper Jones returned to the field in Atlanta.

My favorite, though, was Sandy Koufax for the Dodgers with Orel Hershiser catching. Watch the video below and prepare to smile.

I bought some packs today…

It has been a long time since I bought packs of baseball cards. But today I picked up four packs and enjoyed ripping them open.

The first pack was a 2012 Leaf The Living Legend: Pete Rose; I purchased it at the LCS along with a couple of $1 Starting Lineup figures and a Washington Nationals pennant. Six cards for two bucks…not great, but you know what you’re getting, so I was willing to cough that up.

Surprise, surprise…I got six Pete Rose cards. Like I said, I knew that going in, so I was happy with my haul.

The second pack was the 2012 edition of Garbage Pail Kids. I almost went with the magnets, but decided on the cards instead. Eight cards, two bucks. Only a quarter a pop, so that’s not too bad…

That card alone is worth the two dollars. I was a bit disappointed in the backs of the cards; apparently they are all puzzle pieces now, or else I got a strange pack.

The last two packs were 2012 Panini Triple Play. I absolutely adore these cards.

OK, so I didn’t know who half the players were, but I love the design. These are the first Triple Play cards I’ve bought this year. I definitely want the Reds, but didn’t get any at all, so if you want to trade let me know. Here’s what I got: 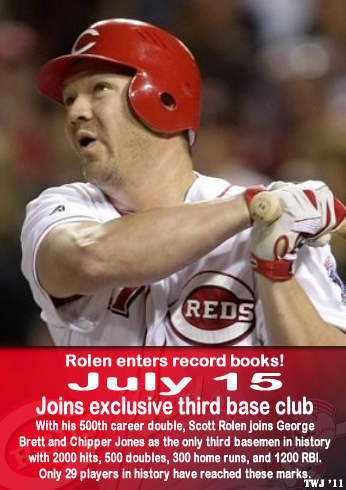 Sometime last year, someone mentioned that Scott Rolen had a decent shot of making the Hall of Fame. Not first ballot, mind you. But once you’re in, you’re in, regardless of how long it takes. I immediately scoffed at the idea. Scott Rolen? Hall of Fame? No way.

Over time, I have warmed up to that idea some, and the fact that he is one of only three third basemen (along with George Brett and Chipper Jones) and only 29 major leaguers to hit this milestone certainly doesn’t hurt his case.

What do you do when a hero retires?

The first thing I did after reading this article was to surf over to the Cardboard Junkie blog. Call it morbid curiosity, but I wanted to see how our buddy dayf was taking the news.

I suppose there are a few reasons for this.

2) He hasn’t had time to process his thoughts into a coherent blog post yet.

3) He hasn’t accepted the truth.

I will be anxiously anticipating his reaction.