If you can spell his last name, I’m impressed, but if you have to call him “Yaz,” I don’t hold it against you. Carl Yastrzemski was one of the best players in Red Sox history, which is saying a lot considering how many great players have worn the Boston uniform. It is fitting that he was inducted into the Hall of Fame in the same year as Johnny Bench, against whom he competed in one of the greatest World Series contests ever. Yaz only received eight fewer votes than Bench in the Hall of Fame vote, with 94.6% support from the BBWAA.

Yastrzemski’s career highlights include the 1967 AL MVP, the same year that the left fielder achieved the coveted “Triple Crown.” The Triple Crown had only been achieved fifteen times prior to Yaz’s 1967 season, and only once since (Miguel Cabrera in 2012). It is considered one of the toughest offensive achievements in baseball. His 12.4 WAR in 1967 is the most in a single season for any ballplayer not named Babe Ruth.

Yaz was no flash-in-the-pan, though. He was named to 18 All-Star teams while slugging 452 home runs and collecting 3419 hits in his 23-year career. I think Yastrzemski might be one of the most underrated players in history, perhaps because he followed Ted Williams, one of the greatest left fielders in history.

Featuring the Triple Crown MVP winner Carl Yastrzemski and Cy Young winner Jim Lonborg, the 1967 Boston Red Sox won the pennant by a game and played a thrilling World Series against the St. Louis Cardinals. Author Raymond Sinibaldi reminisces about that magical season through a series of over 200 photographs, many from his personal collection that have never before been published. Sinibalid begins with a chapter about the franchise and how it changed over the years, going from great to bad and then to “the impossible dream season” of 1967.

It is said that a picture is worth a thousand words; these pictures are worth much more to baseball fanatics. To relive the season in Fenway Park with Yaz and Lonnie and Tony Conigliaro and Reggie Smith and Rico Petrocelli and the many other BoSox, to see them both in the field and in more candid moments in the clubhouse, it is a treasure that Red Sox fans and baseball fans will love.

Who is the greatest left fielder of all-time?

Breaking the 300-point barrier is a milestone in this project. Only two infielders eclipsed this mark: Cal Ripken and Mike Schmidt. In left field, two more join that exclusive group, with Stan Musial (341.07) beating out Ted Williams (305.68) for the top spot. Carl Yastrzemski lands in the #3 spot with an equally impressive 291.24.

The first non-Hall of Famer in my list of left fielders is Bob Johnson (192.02) at #12, slightly ahead of the supposed second-best leadoff hitter of all-time, Tim Raines (#13, 191.61). Perhaps we are overrating Raines’ career a bit, giving him too much credit for being second-best when he truly pales in comparison to his contemporary Henderson?

I have long heard that Lou Brock was a big mistake, that the only reason he ever made the Hall of Fame was his 3000 hits (despite being such a prolific base stealer). When all the statistics are plugged into the spreadsheet, Brock ranks #16 behind Johnson, Raines, and George Foster (#14, 190.99). Now, I’m a huge Reds fan, and would love to see Foster get some more recognition for his career, but I don’t think it was a Hall of Fame career.

Adam Dunn, who has an outside shot at 500 career homers (sitting at 406 as he enters his 13th season), falls dead last on my list of twenty-nine left fielders with a very low score of 131.37. Without a major surge, it is doubtful Dunn will ever have a plaque hanging in Cooperstown.

All seven men who have been honored with the retirement of uniform #8 are in the Hall of Fame, and two served as catchers for the New York Yankees.

Dickey played 19 seasons in the Bronx, going to the World Series nine times (and winning eight). Elected to the Hall of Fame in 1954, his uniform number was retired in 1972 when Berra, who also wore #8, was selected for enshrinement in Cooperstown.

No one accepted the challenge. Back in May, I posted a “fun card” of a 1984 Topps Johnny Bench. A few months prior, Uncle Doc’s Closet (formerly Baseball Card Recollections) made a 1984 Topps Gaylord Perry custom. But no one has stepped up to the plate to make a card for the third player featured on card #6.

If you want something done (at all), sometimes you have to do it yourself. So here you go…a “fun card” of Carl Yastrzemski in the style of 1984 Topps… 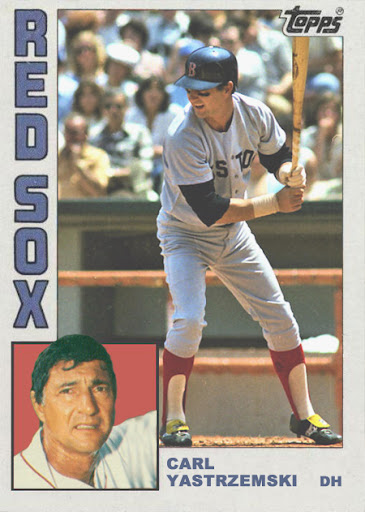