Bryan Price is inexplicably in his fourth season as manager of the Cincinnati Reds. His ineptness as skipper has been on full display since his first season. While he was initially a welcome change to Dusty Baker, it is clear he was not the right option to lead this team. He was a fantastic pitching coach, and I hope when the Reds finally sever ties with him, he is able to fill that role for another team again. Late to the party, but this just popped into my head.

TWJ contributor Patrick sent this “fun card” to me back in December after some of the coaching changes were announced, but it slipped my mind before I got a chance to post it in a timely manner. After I found it again, I decided to hold it until today…the start of a new season, and a new era, in Reds baseball.

Billy Hatcher returns to the Reds coaching staff, along with Price’s picks Steve Smith, Don Long, and Jay Bell, among others.

2014 is going to be a great season in Cincinnati! GO REDS!

Ask, and ye shall receive! Hot on the heels of my brief list of complaints about 2014 Topps Heritage, TWJ contributor Patrick sent in this “fun card” of new Reds skipper Bryan Price. Very nicely done, and a card that definitely should have been included in the set!

TWJ contributor Patrick sent over this “fun card” of Bryan Price recently. Price currently has no cards that I am aware of, but there are some autographed 8×10’s available on eBay for purchase. The new manager will likely be signing at Redsfest in December, but without any official cardboard available, I can’t imagine his line will be very long.

The Price is Right?

The Cincinnati Reds have named their new manager. Bryan Price, who has been Cincinnati’s pitching coach since 2010, will replace Dusty Baker in the dugout. This is Price’s first managerial assignment; he was previously the pitching coach for the Seattle Mariners and the Arizona Diamondbacks.

More changes are coming for the Reds. They need a new pitching coach (obviously), and Brook Jacoby is probably on his way out as hitting coach. The Brandon Phillips trade rumors will start amping up any day now, and a solution must be found for the lack of offense at third base and left field. Will Shin-Soo Choo return to the Queen City in 2014, or will he cash in for a major payday from a larger market?

This is going to be a fun off-season to watch. 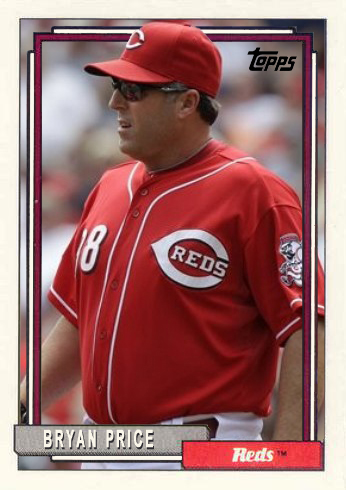 A former pitcher in the California (yes, I said California) Angels and Seattle Mariners systems, Bryan Price never made it to The Show as a player. I could not locate any cards of Price on Topps Archives. And I’m too lazy to go through all the results on eBay to figure out if any of them are the current Reds coach as opposed to the Indians minor leaguer.