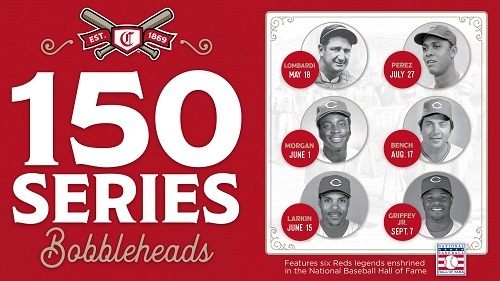 Between regular giveaways, special ticket packages, and Hall of Fame offerings, the Reds have a ton of bobbleheads on tap for 2017. I’m not a crazy, “gotta have ’em all” bobblehead collector, but I do enjoy picking one up every now and then. Here is the run down of the stadium giveaways and ticket package bobbleheads available:

Add to that six planned bobbles at the Hall of Fame for Leo Cardenas, Tommy Helms, Pete Rose, Ron Oester, Dave Parker, and George Foster, and your shelf could be full of just 2017 issues.

The ones I am most interested in from these are the Perez/Casey/Votto triple bobblehead, Charlie Brown, and Parker from the Hall of Fame. I don’t think I will put out the money for Charlie Brown, though, since those tickets are a bit more than I prefer to spend. The others are definite possibilities, and I may end up getting the Hall of Fame package that includes all six bobbleheads and a 1975 World Series replica ring. This 7-inch-tall figure, designed by Aggronautix, is limited to 1500 numbered units and depicts the legendary star in a classic pose, with a skeleton in hand.

“This Vincent Price bobblehead perfectly captures my dad’s whimsical scariness,” said Victoria Price. “He would have loved it, and so will you!”

Made of space-age polyresin, and sculpted with frightening accuracy right down to the fine facial details, the Vincent Price Rue Morgue RIPper is only $29.95 plus S&H and is expected to go fast.

“We’re thrilled to be teaming up with Victoria Price and the talented team at Aggronautix to create the first in a unique line of quality collectibles,” said Rodrigo Gudiño, President of Rue Morgue.

Aggronautix expects stock before Christmas but can’t guarantee delivery before Christmas due to the fact that customers are worldwide and shipping times will vary from a few days, to a few weeks.

All Aggronautix figures are now available for purchase on www.aggronautix.com and will also be available at independent record stores, comic shops, tattoo parlors, etc via distribution by MVD Entertainment Group.

Four out of five Reds Hall of Fame bobbleheads announced

Sparky Anderson, Jim O’Toole, Eric Davis, and Barry Larkin will be the first four bobbleheads offered to Reds Hall of Fame visitors on select days this season. A photo of the Davis figure was posted on the Reds Hall of Fame Twitter account today…

Become a member of the best team Hall of Fame in the country! Details here!

I never set out to be a bobblehead collector, but I now have thirteen different bobbleheads in the man cave. The only one I’ve ever paid for – Mark Prior in a Cubs uniform – cost a whopping dollar at an antique mall (I actually have two of them, one still in its packaging, if you are interested in trading for one).

Today, I picked up my thirteenth bobblehead, and it was my fifth Johnny Bench figure.

This year, the Reds Hall of Fame has been giving away Bench bobbleheads free with paid admission on the weekends (while supplies last). As an “All-Star Family Member” of the HOF, the first four were included with the membership package. The fifth, however, was not. So I forked over the ten dollars for admission to the museum this morning, and added Johnny Bench #5 to my collection.

I normally don’t go out of my way for bobbleheads. The first one I ever got was of Mr. Red, offered as a free gift when you signed up for a credit card. The card was canceled and cut up as soon as received.

The second was Larry Bird, wearing an Indiana State uniform. I’m sure it was given to me at some point while I lived in Indiana, but I cannot remember exactly when or by whom.

I have picked up four other bobbleheads at ballgames: Chris Sabo, Jay Bruce, and Joey Votto (all Reds), and Adam Jones (Orioles). Another figure, Aaron Harang, was won on Listia, and the shipping was free, so I didn’t even have to pay to have it mailed to me. And then there was the $1 Mark Prior (of which, again, I have two…if you are possibly interested).

Again, I am not an intentional bobblehead collector. But I am a Sabo fan, a Votto fan, and a Bruce fan. And a supporter of the Reds Hall of Fame. And I can’t pass up free stuff. And I was just lucky that we happened to go to the Baltimore game on a promotion night. I guess that makes me an accidental collector?