Much like Night Owl, I have some fond memories of All-Star Games throughout the years. One of my most vivid memories is of Bo Jackson smashing a Rick Reuschel pitch for a home run in the first inning of the 1989 All-Star Game in Anaheim. I didn’t even remember that he won the MVP honors for that game until I looked it up, but I remember that towering blast.

There has been a lot of speculation about how great Bo Jackson would have been had he not been injured playing football. Just for fun, I plugged some of his numbers into Bill James’ Favorite Toy to see where he might have ended up if he stayed healthy. I used his numbers from the 1987-1989 seasons.

Home runs: Based on his age, your player can be expected to play for 8 more years, at an average of 24.7 per year. At that rate, he will finish at 278 for his career.

Runs batted in: Based on his age, your player can be expected to play for 8 more years, at an average of 66.7 per year. At that rate, he will finish at 768 for his career.

Not really earth-shattering numbers. Perhaps if he had given up football to play on the diamond full-time he would have fared better (and lasted longer). 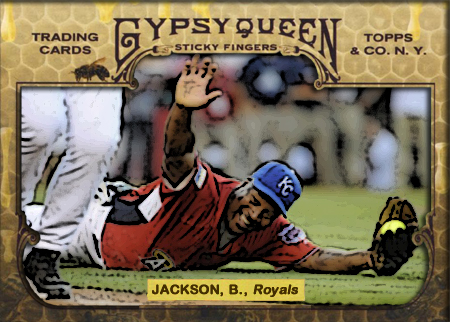 He was an All-Star only once. He only played more than 100 games in four seasons. His lifetime batting average is .250. Yet, Bo Jackson was and still is a hugely popular baseball (and football) player. 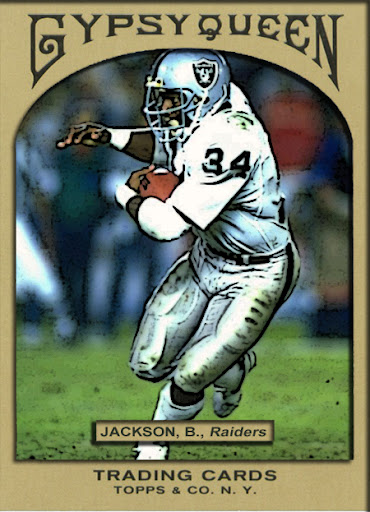 Topps, you’re stupid. Sorry, but it had to be said. Pick the top 60 out of a pre-selected 100, which aren’t really the top 100 to begin with? Maybe there wasn’t an easier way to do this, but you could have at least given a better selection of cards…maybe select from 500 different cards. There would have been a better chance of making people at least a little happy.

Above are the cards I voted for. If the field had been more diverse, I may have still picked the Pete Rose and Johnny nBench rookies and the Satchel Paige card. I doubt the Dwight Gooden record breaker would have made the cut. But yes, I would rather have a Gooden reprint than another Mickey Mantle. I like pulling Mantle cards from packs, but it’s not as exciting as it once was.

If I could truly pick my personal top 10, I would include the 1987 Bo Jackson, which is much more iconic than the ’86 Traded version. And the 1985 Eric Davis. There wasn’t a kid in Cincinnati in 1985 that didn’t drool over that card.

And what about the 1986 Pete Rose record breaker, commemorating Charlie Hustle’s march past Ty Cobb? Or the 1984 Topps Traded Pete Rose, showing the Hit King during his time north of the border?

In 1986, the Tampa Bay Buccaneers chose Heisman winner Bo Jackson of Auburn as the No. 1 pick of the NFL draft. They offered him a five-year, $7.6 million contract, the highest ever (at the time, obviously) for a rookie, but demanded that he make a choice between playing football and baseball. He turned down their offer and signed a 3-year deal with the Kansas City Royals for just over a mil, deciding in 1987 that maybe he did want to play football after all. Drafted in the seventh round by the Los Angeles Raiders, Bo had somewhat successful but injury-shortened NFL and MLB careers. But what if…

Another trip to the Antique Mall…

This is turning into a weekly journey. Ever since I found the place, I want to go every chance I get. Today I went with one player in mind: Dave Concepcion.

To call Concepcion a “Star” is an understatement.

Even to call him an “All-Star Étoile” misses the mark, since those only play one game a year.

I would have settled for “Super Star,” but Kellogg’s said, “No, he’s more than that! He’s a 3-D Super Star!” Honestly, why this guy is not in the Hall of Fame baffles me. He ruled the shortstop position until Ozzie Smith arrived, and though he didn’t do any somersaults, I would pick Davey over the Wizard any day of the week.

What surprised me was that he came out of retirement in 2004 to play in the Red Sox/Cardinals World Series. I’m not sure which team he played for, though, because they let him wear his old Cincinnati uniform. Sadly, I was not following baseball in 2004 so I had no idea this was going on.

Of course, I didn’t stop at Concepcion. I also picked up a 1962 Cincy shortstop…

Sammy Ellis and Jesse Gonder. What, you were expecting someone else?

In addition to these, I got a few packs of randomness, out of which I pulled this oddball Sandberg…

It’s not a Baseball Cards Magazine card like I expected. There is no manufacturer info at all on the back, just Ryno’s 1986-1990 stats. But wait, there’s more! I also got this extremely oddball Bo Jackson…

The flipside actually has another photo of Bo. Again, no manufacturer details, so no telling where this card came from. Maybe Bo knows?

And finally, I took a trip down to the actually baseball card shop as well and picked up a few more packs of 1992 NFL Game Day. I don’t know why I am drawn to these cards. Maybe it’s the 50-cent price tag.

Out of these packs, I got a radio host and a kitchen appliance…

A couple of great 1980’s quarterbacks…

I remember how everyone made a big deal about Dan McGwire, little brother of Mark, but he never really made a mark on the league, did he? And Klingler, of course, was the first in a long line of terrible Bengals QBs. I don’t blame Klingler for his poor play in Cincinnati; I blame the Bengals for throwing everything on one young man’s shoulders and giving him no support whatsoever. Like they did with Akili Smith. And Jeff Blake. And Carson Palmer. Although Palmer has handled it admirably so far. So…far….

I drew these back in 1990. I even made backs for the first few, but my handwriting is so awful I’ve decided to keep those backs off the ‘net. You can click on the thumbnails below to see a much larger scan.

And speaking of “fun cards,” don’t forget to visit this post at Awesomely Bad Wax Packs and tell us who you would like to see in the “fun card” set!

In 1987, Topps brought back one of the greatest subsets called “Future Stars.” Fleer had some success with their “Prospects” cards and “Rated Rookies” were a staple of the Donruss set. Add to that the beginning of the rookie card craze (Topps also brought back the All-Star Rookie trophy on the cards in 1987) and the “Future Stars” concept was a no-brainer. But how much psychic fortitude did Topps display? Let’s take a look back at 1987 and see how they did…

#170 Bo Jackson. Bo knows baseball. Well, he knew baseball back in the 1980s. He also knew football, and that was to the detriment of his baseball mightiness. An injury sustained in a 1990 Raiders-Bengals game ended his gridiron career, and hindered his baseball success. But during his first five seasons in Kansas City, Bo hit 109 dingers for the Royals. In 1989, he blasted a lead-off home run against Rick Reuschel in the All-Star game. In an amazing comeback with the White Sox and Angels after his football injury, Bo racked up another 32 round-trippers in three seasons. Future star? You bet, although that star dimmed far too soon. Current Beckett value: $3.00.

#216 B.J. Surhoff. Surhoff was a consistent and durable player for the Brewers, Orioles, and Braves, but not sure how much of a “star” he was. He did make the All-Star team in 1999 while in Baltimore, en route to 28 homers and 107 RBIs. He finished his career with a respectable .282 average while playing every field position except center field and pitcher. I would call him a “minor star” at best. Current Beckett value: $.40.

#429 Tim Pyznarski. A first-round draft pick for the Oakland A’s in 1981, Pyznarski was traded to the Padres in 1985 for Jody Lansford. Yeah, I’ve never heard of him either. Pyznarski had a good year in the minors in 1986, hitting 23 home runs with 119 RBI on his way to winning the Sporting News Minor League Player of the Year and the MVP of the Pacific Coast League. He played 15 games for San Diego in late 1986, with 10 hits (9 of them singles) in 42 at-bats for a .238 batting average. In October of 1986, the Padres shipped him off to Milwaukee to complete an earlier trade for Randy Ready. Tim never played for the big league club, and was traded again in 1988 to the Baltimore Orioles for a couple of minor leaguers. Poor Pyznarski never got back to the bigs after his brief cup of coffee in 1986, but Topps called him a “Future Star” in 1987. Current Beckett value: $.05.

#449 Pat Dodson. Not sure who was a bigger bust, Pyznarski or Dodson. Pat was drafted in the 6th round in 1980 by the Red Sox and won the 1986 MVP of the International League with Pawtucket, but his time in the majors was short and not very sweet. Dodson only played 52 games over three seasons in Boston, hitting .202 with 4 homers and 10 RBI. What I can’t figure out is why his card is worth more than Pyznarski’s. Current Beckett value: $.10.

#512 Dave Magadan. Lou Piniella’s cousin had a decent major league career. 1990 was his big year, finishing third in the NL with a .328 batting average, second with a .417 on-base percentage, and a career-high 72 RBI. His performance was enough to pull down a few low votes for the MVP award that year, finishing 22nd in balloting with 4 points. After leaving the Mets, Magadan was more of a role player than anything, playing with the Marlins, Mariners, Astros, Cubs, A’s, and Padres. He was a “minor star” for one year. Current Beckett value: $.25.

#634 Rafael Palmeiro. The final “Future Star” for the 1987 Topps set was one of the best hitters in baseball during the 1990s. He made his first All-Star appearance in 1988 with the Cubs, but surprisingly only made the team 3 other times in his career (1991, 1998, and 1999). That’s a pretty low number for a guy with 569 career round-trippers, good for tenth on the all-time list (just behind Harmon Killebrew, right ahead of Reggie Jackson). He had 10 seasons with over 30 homers, four of those over 40. Unfortunately there was that whole steroid scandal that put a bad taste in everyone’s mouth and puts his chances for Cooperstown in question. Star? Sure, albeit a juiced one. Current Beckett value: $1.50.

Two major stars, two minor stars, and two no-names. Not a terrible year for Topps, but they missed a couple of big names that could have been dubbed “Future Stars”: Greg Maddux (a sure-fire first-ballot Hall of Famer) and Mark McGwire (who did have a 1987 Topps card, but without the colorful banner). There were a couple minor stars that were also overlooked: the 1987 NL Rookie of the Year Benito Santiago and Oakland catcher Terry Steinbach.

But you can’t complain about a set that has Bo Jackson in it, regardless of who else may or may not be there. Current Beckett value: $5.80.