Jeff Pico pitched for the Chicago Cubs from 1988-1990, going 13-12 with a 4.24 ERA. He appeared in the original 1990 Score set as a Cub. Pico was named the Reds pitching coach in 2014 after several years of coaching in the Arizona Diamondbacks system. It was announced last month that his contract would not be renewed for the 2016 season. Mack Jenkins never made it to the majors, but pitched in the Reds’ minor league system from 1986 through 1988. As a member of the Billings Mustangs in 1987, Jenkins was the winning pitcher that ended the Salt Lake Trappers’ record winning streak at 29 games. He is currently serving the Reds as bullpen coach. Mike Stefanski was a 1994 Texas League All-Star, but never made the jump to the major leagues. He became the Reds’ bullpen catcher in 2004 and was named catching coordinator in 2013. Billy Hatcher was a member of the 1990 World Champion Cincinnati Reds and set World Series records for highest batting average (.750), most consecutive hits (7), and most doubles in a four-game series (4). He appeared in the 1990 Score set as a member of the Pirates, and in the Score Rookie & Traded set for the Reds. Hatcher has been stationed in the first base coaching box for several years, but in 2016 will transition to the third base coaching box. Freddie Benavides made his major league debut with the Reds on May 14, 1991, as the starting shortstop against the St. Louis Cardinals. He was 0-1 that day, but scored a run after being hit by a pitch in the fifth inning. Benavides will step into the first base coaching box in the 2016 season.

TWJ contributor Patrick sent this “fun card” to me back in December after some of the coaching changes were announced, but it slipped my mind before I got a chance to post it in a timely manner. After I found it again, I decided to hold it until today…the start of a new season, and a new era, in Reds baseball.

Billy Hatcher returns to the Reds coaching staff, along with Price’s picks Steve Smith, Don Long, and Jay Bell, among others.

2014 is going to be a great season in Cincinnati! GO REDS!

How awesome would it be if coaches received individual cards? I remember Vada Pinson being included in the 1982 Donruss set as a White Sox coach. I would love to see an official card for Billy Hatcher as a coach. 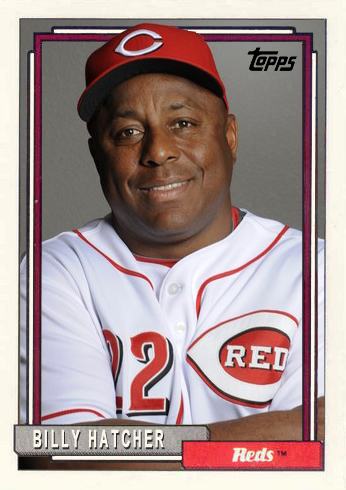 One of the heroes of the 1990 World Series, Billy Hatcher has been coaching with the Reds for about six years, and I’m very glad he is with the organization. Hatcher also had a card in the real 1992 Topps set, as a Reds player. His last Topps card as a player came in 1996.

doubt. This was the first year I really paid attention to baseball. I had been collecting baseball cards for a few years before this, but besides watching a few Reds games on television and in person, I never really took notice of the game as a whole. In 1988 that all changed, with the emergence of some exciting rookies: Ron Gant, Mark Grace, and the eventual Rookie of the Year and still one of my favorite players, Chris Sabo. The excitement of the 1988 season continued in the postseason for me as I watched Kirk Gibson pull off the unthinkable pinch-hit home run off Dennis Eckersley in the World Series as the Dodgers went on to beat the Bash Brothers. I don’t care if you love or hate the Dodgers, that World Series was fun to watch.

The other two seasons that come to mind, but neither comes close to

2010 was an exciting year as well, watching Joey Votto rise up as the next superstar produced by the Big Red Machine, seeing Jay Bruce and Drew Stubbs endure adversity and mature at the plate, and following the progress of the young pitchers, Mike Leake, Sam LeCure, Matt Maloney, and of course, the Cuban Missile Aroldis Chapman. Yes, the season ended on a sour note due to the manager’s foolish decision to start an injured shortstop in a playoff game, but it was a fun ride.

So what are your favorite baseball seasons, and why?

First base coach Billy Hatcher was a clutch member of the 1990 World Championship Reds team, and a terror to the Oakland A’s pitchers in the World Series, hitting a record four doubles. Many members of that 1990 team have made appearances at Great American Ballpark this year, but Hatcher is there every day contributing to the continued success of the Redlegs.

Check out the full set here!