I started making these early in the season, then took a several-month break because the team was so frustrating. I tried to start back up after the All-Star break, but it was really hard to get motivated to do the full roster.

I’m not going to make an individual post for each card like I usually do. It was not a fun season, and I have no interest in re-living it. Instead, I will post by position, starting with pitchers. I think I got all the big names, but if I’m missing any let me know and I’ll throw it together. 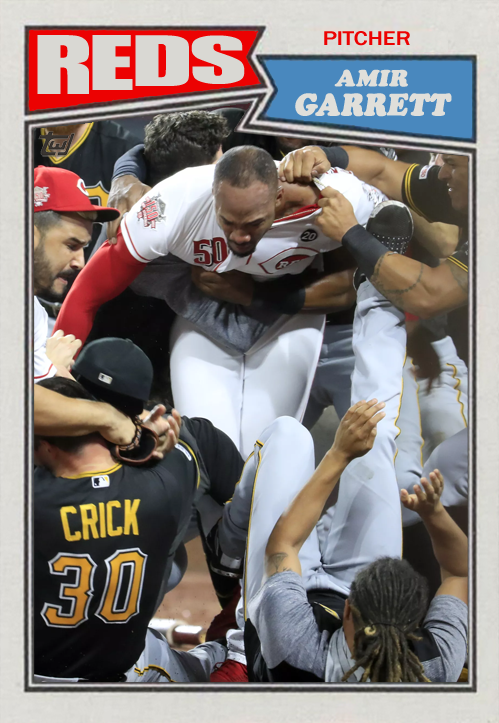 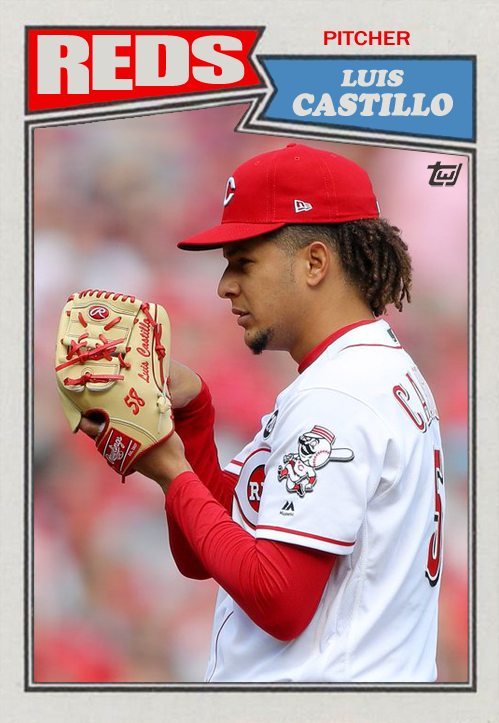 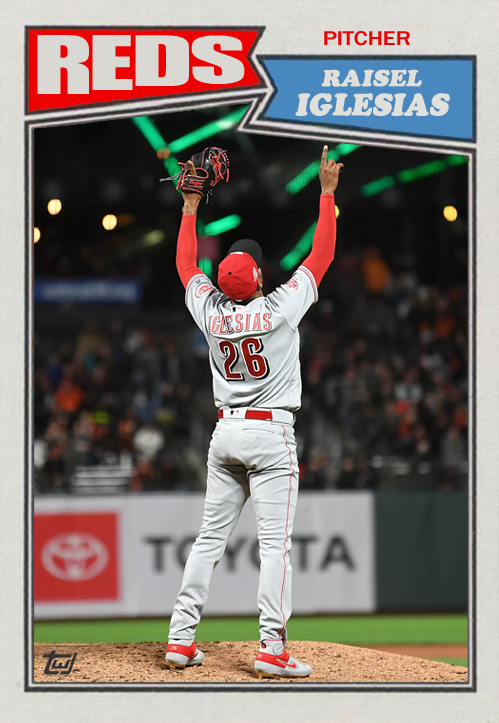 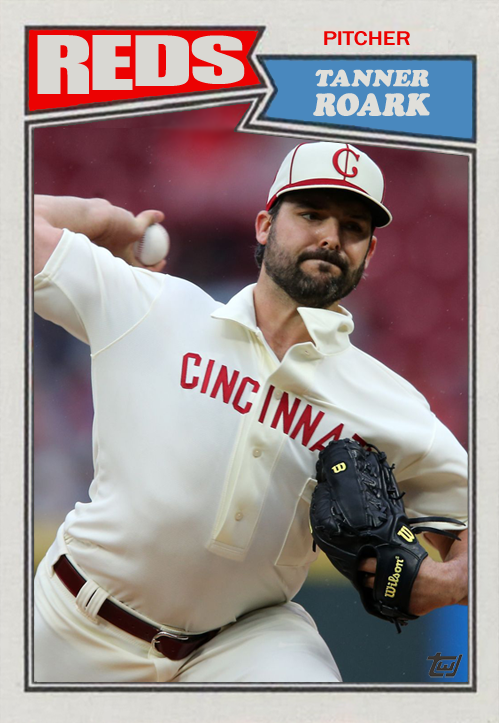 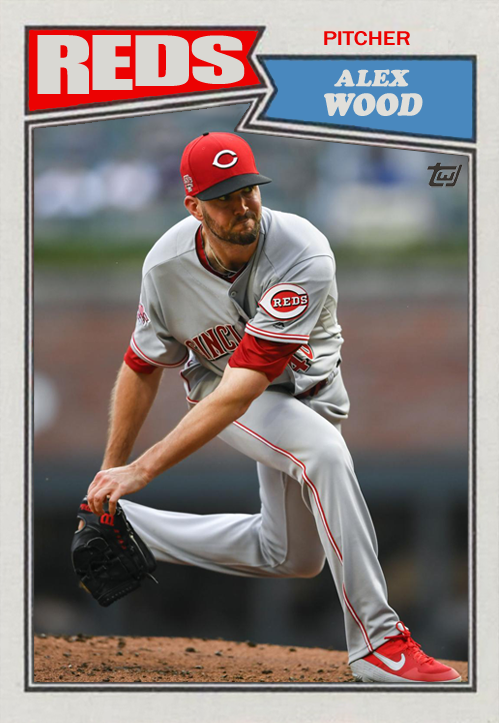 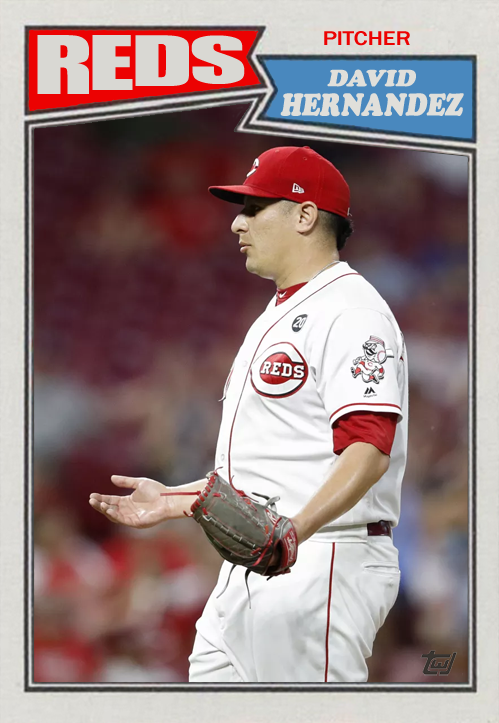 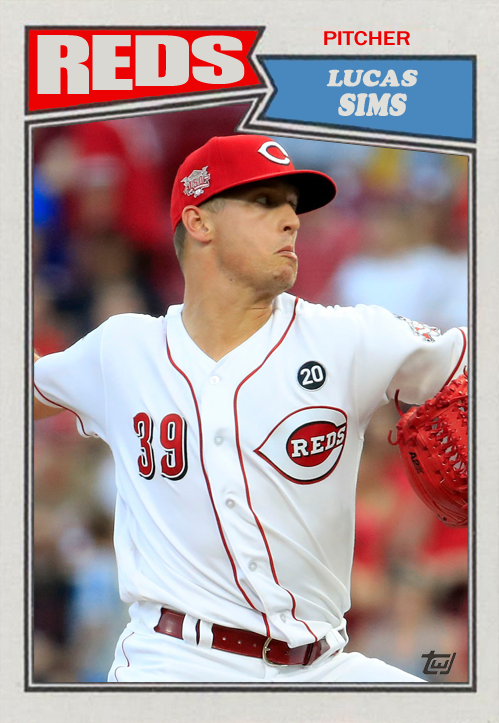 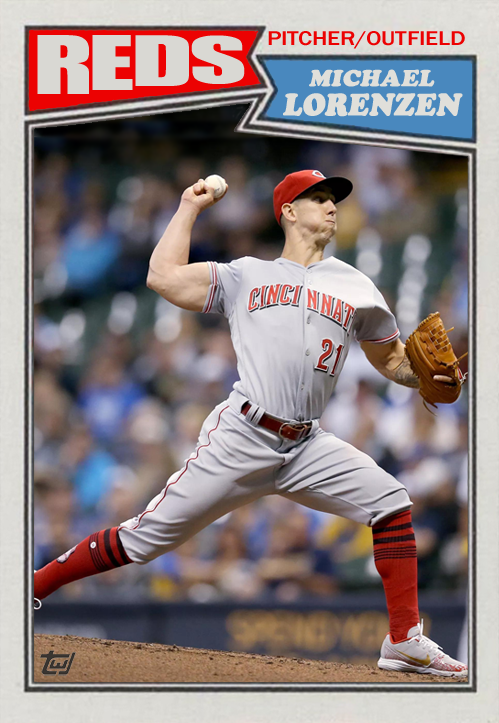 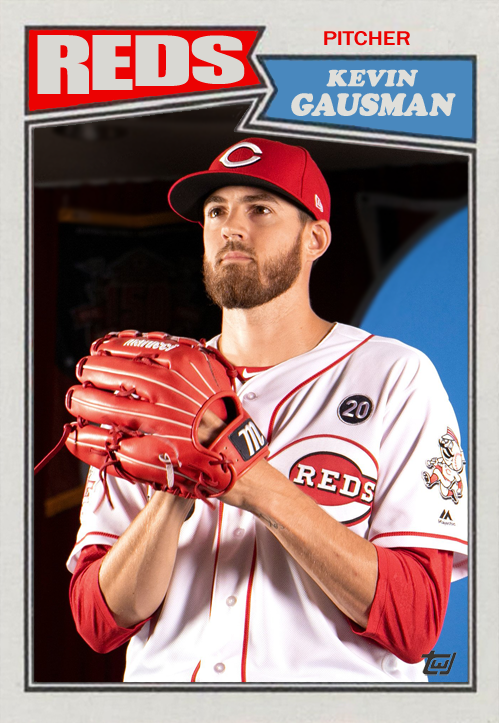 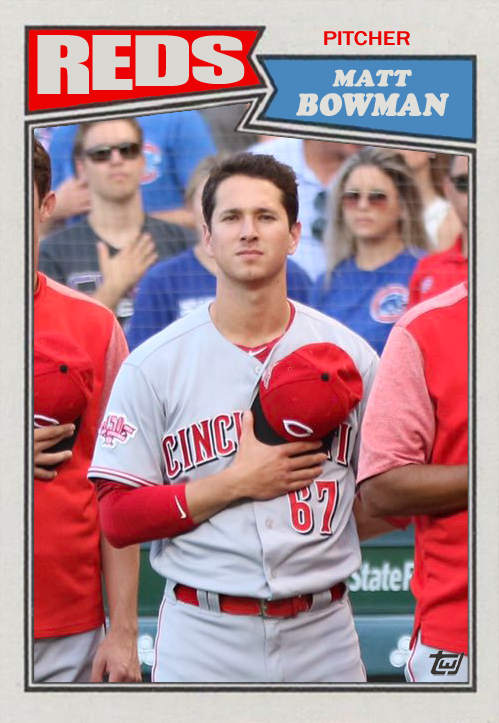 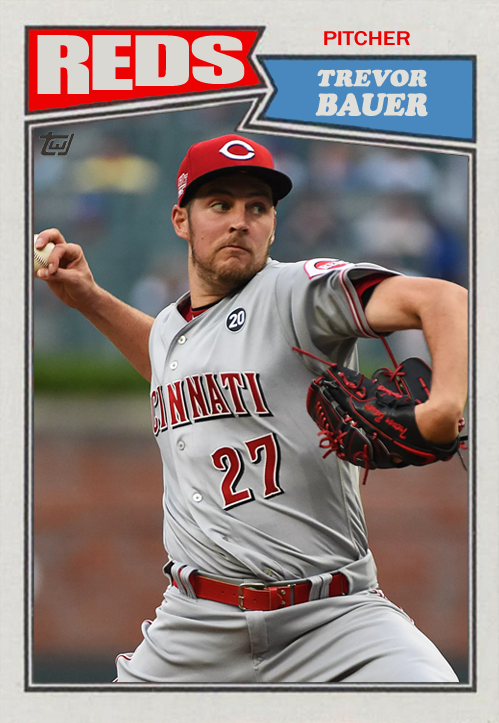 I received an email earlier today from a blog reader. Jere Chandler wrote, “I recently stumbled across your custom Reds cards and really enjoyed looking through them. I’m a huge Reds fan. I saw my first game at Riverfront back in ’75, and I’ve been hooked ever since. Your ‘fun cards’ even inspired me to make a few of my own.”

I asked if I could share his creations here, and he consented. I will break it into three posts over the next few days, starting with some 1975 Topps customs of a couple of rookies (Aristides Aquino and Josh VanMeter) and a couple of pitchers (Luis Castillo and Amir Garrett) today. 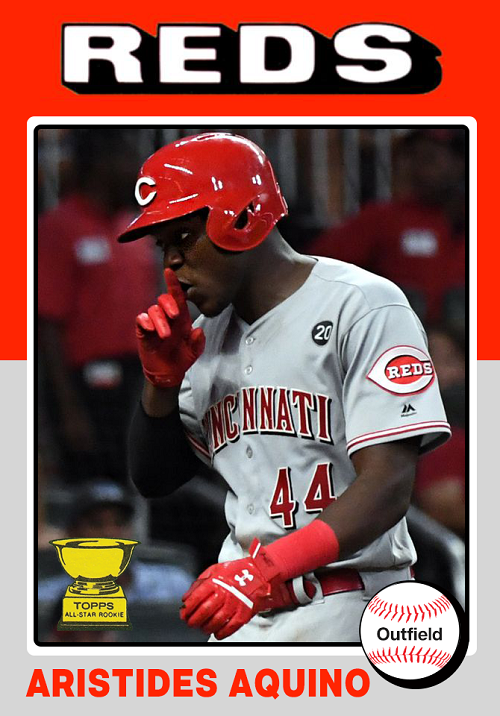 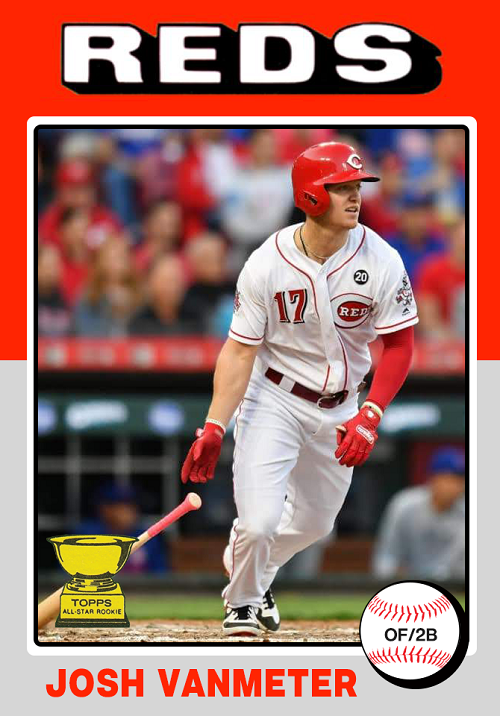 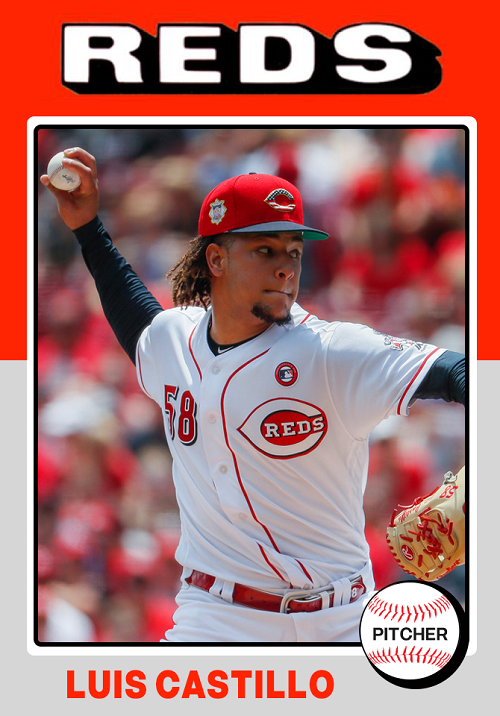 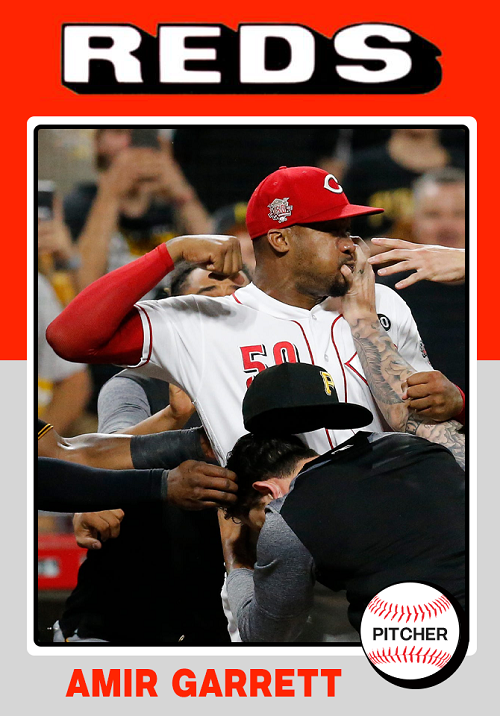 I love the look that Jere used here with the red and gray border. Of course, that’s not faithful to the original set, and Night Owl would probably have a conniption fit if Topps released anything like this. But I think they look nice and clean and I would happily slide these into nine-pocket pages if they were real. Thanks for sharing Jere!

All the way from Stockton, California… Twitter is such a phenomenal tool for baseball card collectors. There is no chance Brian Bice and I would have ever connected without Twitter, but because of Twitter I was able to make my card collection a little less green and he made his a little less red. The package Brian sent was filled with Bowman from the past few years, which is awesome because I almost never buy Bowman for myself.

One of my favorite Reds players right now is Amir Garrett. I’ve been a fan ever since he was drafted, and I expect huge things from him this year on the mound. He had a rough rookie season, but the dude is an superb athlete and I have little doubt he will turn it around. All-Star appearance in 2018? We’ll see! There are some things I don’t really like about Bowman cards, though. The first is the whole “RC” mess. If a guy is in a major league uniform, to me, that’s a rookie card. Garrett had cards in 2015 and 2016 Bowman, but his rookie cards are in 2017 products, like this Topps Heritage card: Another thing I don’t like about Bowman is the sameness of the design. The two cards below come from two separate sets, if I understand correctly. I’m not exactly sure which is which without looking at the card number, because the design isn’t just similar, it’s exactly the same. Photo variations within the same set are annoying, but when two sets use the same design but different photos…that drives me nuts.

Now if you wait 25 or 50 years to recreate a design, to pay homage to it, I’m fine with that. I love Heritage. I also love Topps Archives, and Brian threw a 2015 Archives card in the trade package that I didn’t even have on my wantlists yet: The package included a lot of other goodies, from Heritage to Bowman to Stadium Club and more. And of course, what’s a trade package without some junk wax? I have most of these cards already, but doubles are great for TTM requests.

Thanks for the great trade Brian! 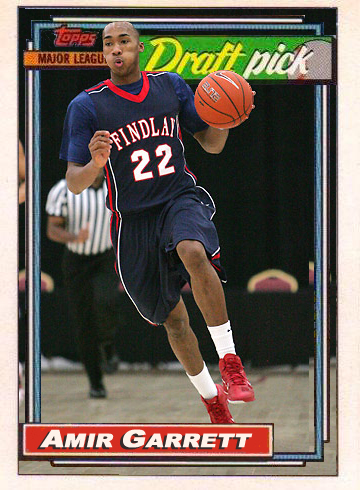 Despite his commitment to play basketball at St. John’s, the Reds selected left-handed pitcher Amir Garrett with the 685th overall pick.