The Night Owl raved last night about music trading cards. And he showed off some cards he received from a reader, some from the early 1990s and some from the late 1970s. I have a few music cards in my collection as well, but I don’t believe I own any of the early 1990s “Rock Cards” that Night Owl flaunted. While the card designs (if you want to call them designs) aren’t attractive, the subjects are perfect for headbangers. From Slaughter to Poison to Skid Row…I would have loved these cards back in the day.

Forget “back in the day.” I would love these cards today. Though I would hope they could hire a better graphic designer. 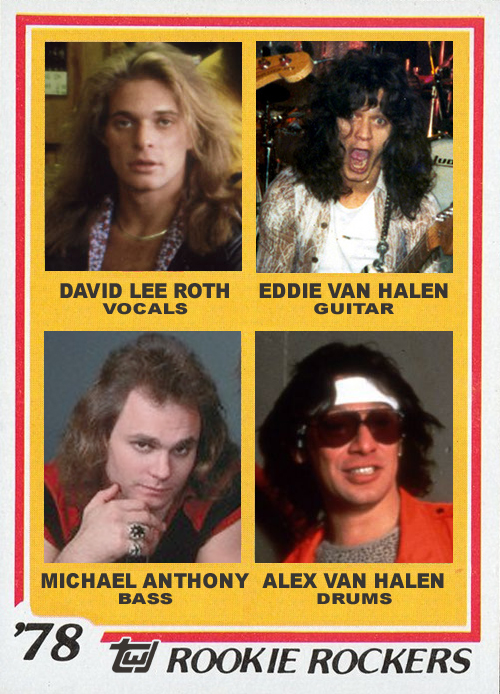 was released in 1978, so I put the foursome’s mugshots on a 1978 Topps rookie card. This is the kind of set I would like to see, and maybe Topps can make it happen. Maybe they can sign some of my hair metal favorites to contracts and produces an Archives-style music trading card set. Members of Mötley Crüe on 1982-style cards, KISS on a 1974-style cards (like this), Winger on 1988-style cards. That’s a set I would collect.

How about it Topps?

Drummer extraordinaire Alex Van Halen was born May 8, 1959. Van Halen is one of my favorite rock bands. I saw them in 2007 in Cincinnati and again this year in Indianapolis; I’m considering a run up to Columbus in a few months to catch another show.