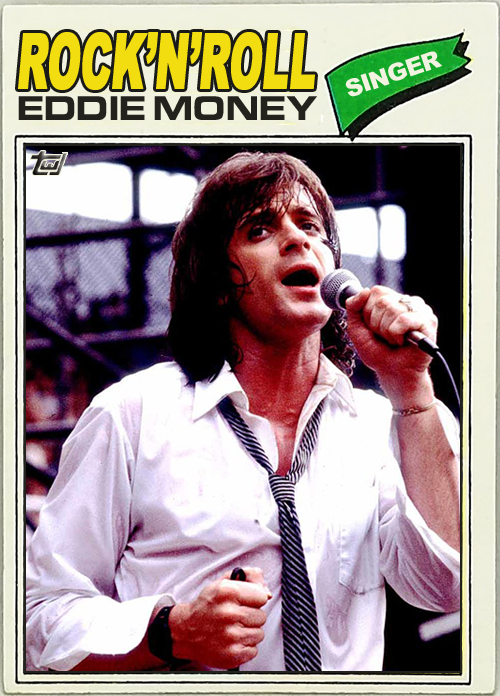 Eddie Money passed away this morning from complications from a recent heart valve replacement. He was 70 years old. Born Edward Joseph Mahoney, the singer’s double platinum debut album in 1977 contained one of his most enduring hits, “Two Tickets to Paradise.” Other hits include “Baby Hold On,” “Take Me Home Tonight,” and “I Wanna Go Back.” 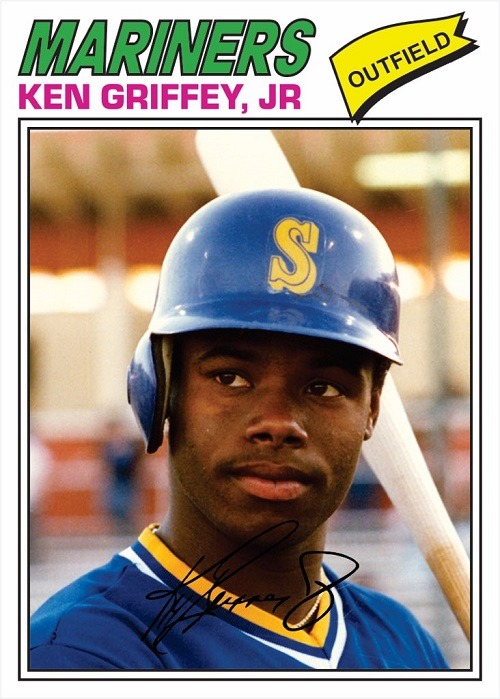 Here’s another great custom card of Ken Griffey Jr., based on the 1977 Topps design, from the digital wizard Lanny Ribes, a.k.a. @DOCBZ17 on Twitter!

I’ve been following @battlinbucs on Twitter for a few weeks now, and let me tell you, for a Pirates fan he is a pretty creative guy. I love his #DocumentaryNOW cards which merge the UD Documentary and Topps NOW concepts. Today he blogged about an alternate reality 1974 Topps card, using mockups he discovered on The Topps Archive blog. Last month, he covered a possible alternate 1972 design. Joe Morgan was at the top of his game in the mid-1970s, with two straight NL MVP titles during the Big Red Machine’s back-to-back World Series victories. The original mockup used a batting photo, but I decided to go with a fielding shot of the five-time Gold Glove second baseman. As Mark pointed out, since the source material was black & white, I had no idea what colors to use. Topps used green in the small banner on the real 1977s, so I stuck with that for the big banner here. Obviously the hat has to be red for the Reds, and I thought the yellow team name contrasted well with the green banner.

This is a fun exercise. I would love to see Topps use some of these old alt-designs as an insert in Archives. I’m sure they have other mockups in their vault that have not yet seen the light of day.

Thanks for the inspiration, Mark!

On a personal note, I found out a few hours ago that an uncle passed away earlier this afternoon. I’m stuck at work, and baseball is a good distraction for me. But more than baseball, I’m thankful for my church family and the prayers they are sending up on behalf of my family. If you are ever in the northern Kentucky/greater Cincinnati area, please worship with the Point Pleasant church of Christ. I would love to meet you face-to-face. My wife and I busted a box of 1991 Pro Set MusiCards over the weekend. That was a blast, and I had fun looking at all the cards. Motörhead was even featured in the set. But I couldn’t get past the thought that they would look so much cooler on the baseball card designs from their “rookie”

years. I’ve done this for Led Zeppelin, Van Halen, KISS (including Bruce Kulick and Vinnie Vincent), and most recently David Bowie, so I figured it was time to immortalize Lemmy Kilmister on a 1977 Topps-style “fun card.”

“Puggsley” from the original The Addams Family television show passed away Sunday from a heart attack. He was 59 years old.

TWJ contributor Patrick sent over this “In Memoriam” card in the style of 1977 Topps “Turn Back the Clock” cards.

Long before Todd Frazier put on a major league uniform, he stood next to Derek Jeter on a baseball diamond. As a member of the Little League World Series champion in 1998, Frazier and his teammates got to stand next to their Yankee counterparts before a game in New York. But Jeter wasn’t Frazier’s favorite Yankee at the time; find out here who Frazier actually wanted to be standing next to that day.

TWJ contributor Patrick sent over this fantastic “fun card” in the style of the 1977 Topps “Turn Back The Clock” subset. It’s neat to see how much Frazier has grown, and how little Jeter has changed in sixteen years. Even though Frazier now plays third base rather than shortstop, he still shares one thing with Jeter: both are class acts.

TWJ contributor Patrick mixed it up with the designs used for the lower rounds of the 2013 MLB Draft, grabbing three multi-player templates from the 1970s and two from the 1980s. I’m not going to post a rundown of each draft pick…that’s what Google is for. Or you can check out the Draft Tracker at mlb.com if you just want the vitals for these guys. Who knows, one of them might be the next Mike Piazza, or Ian Kinsler, or Albert Pujols.

This may be the first ever card showing Vida Blue in a Reds uniform. Another fantastic submission from reader Patrick, he shows what could have been in 1978 had Commissioner Bowie Kuhn not interfered. Here is a January 31, 1978, article from the Montreal Gazette detailing the trade and veto. A couple of years prior, Charlie Finley had attempted to move Blue to the Yankees, and Kuhn blocked that deal (and others involving Joe Rudi and Rollie Fingers) as well.

Thanks for the great submissions, Patrick, and for allowing me to share them with other TWJ readers!

Steve, along with the majority of the baseball card blogosphere, hates the randominity of Topps’ “What If” cards. Cy Young appearing on the 1987 Topps design just kills him. I, on the other hand, love them. Well, not love. But like. Very strong like. You see, I all but hate modern baseball. I like Griffey and I kind of follow the Reds (kind of being a very strong phrase), but other than that I would much rather watch reruns of the 1975 World Series…even game 6.

In a post about Eddie Gaedel, Steve made a card that never was (1951 Bowman) as well as a card that, in his opinion, should never be (1986 Topps). Frankly, I like the 1986 Topps Gaedel quite a bit. But that’s beside the point. In the comment section, I joked that I would make some random custom cards with Steve in mind, like Ozzie Guillen on a football card design, and a Frank Thomas on a Star Wars card design. So, without further ado…