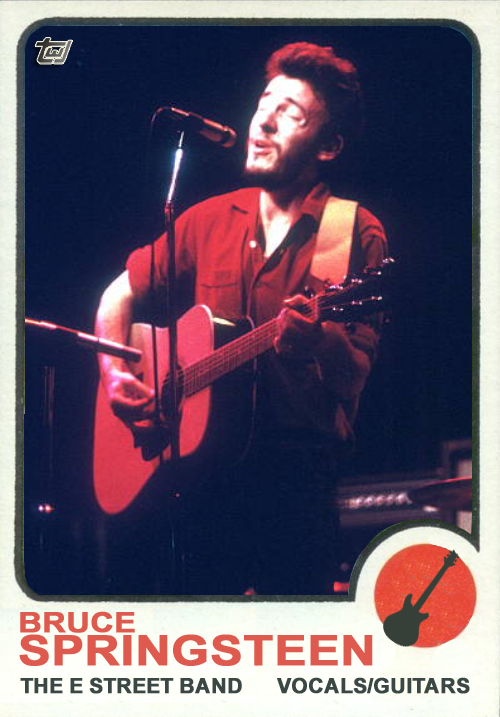 Bruce Springsteen seems to be one of those guys that you either love or hate. He’s got some of the most recognizable classic pop/rock songs in the world, from “Born to Run” to “Dancing in the Dark” to, of course, “Born in the USA.” Often misunderstood, his songs are used by politicians (and they usually receive a cease and desist letter from his attorneys).

One of my favorite songs from the Boss, however, is his take on the legendary Christmas song, “Santa Claus is Coming to Town.”

Whether you enjoy Springsteen’s music or not, hopefully you’ll enjoy these “fun cards” of the Boss and his backing bad, the E Street Band. 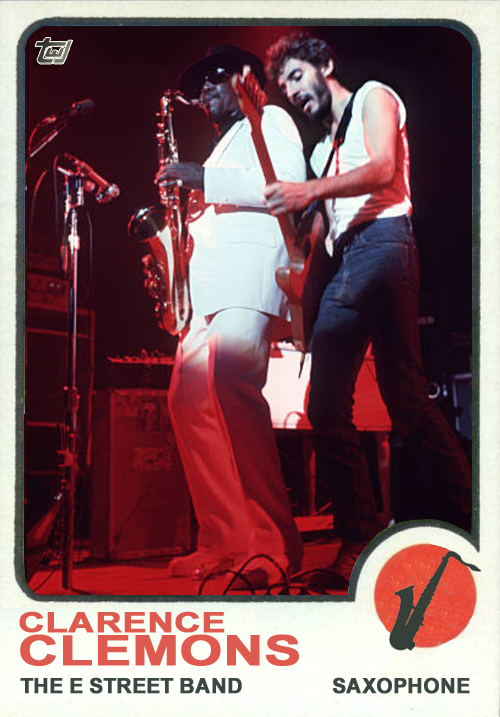 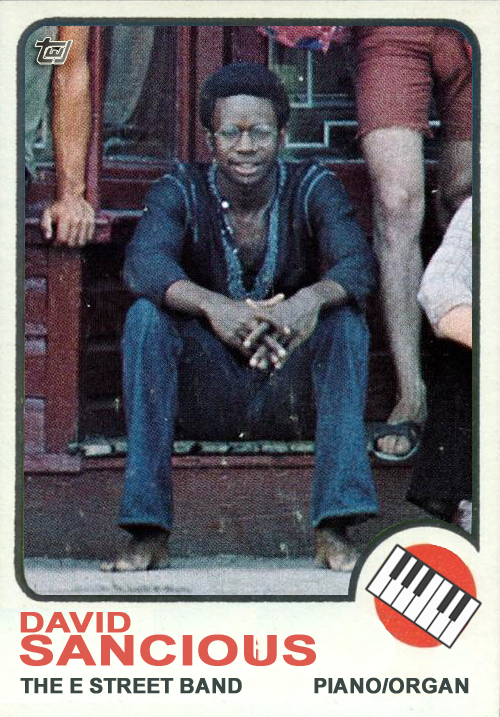 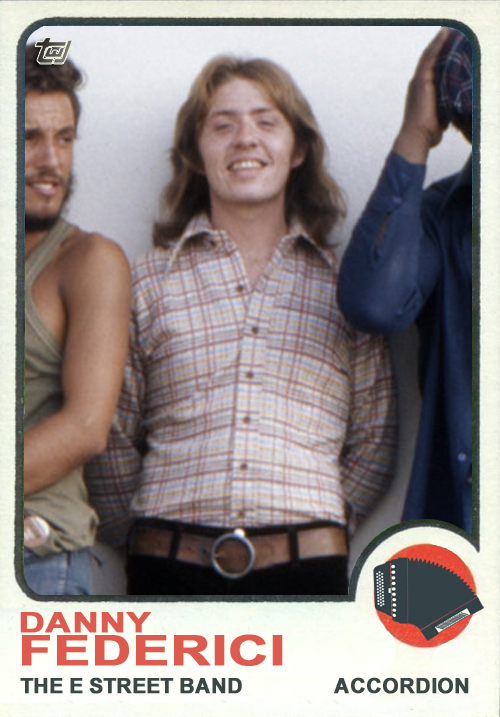 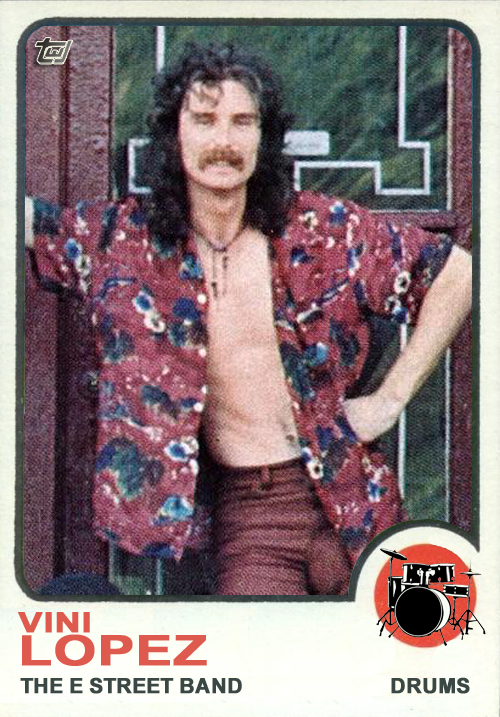 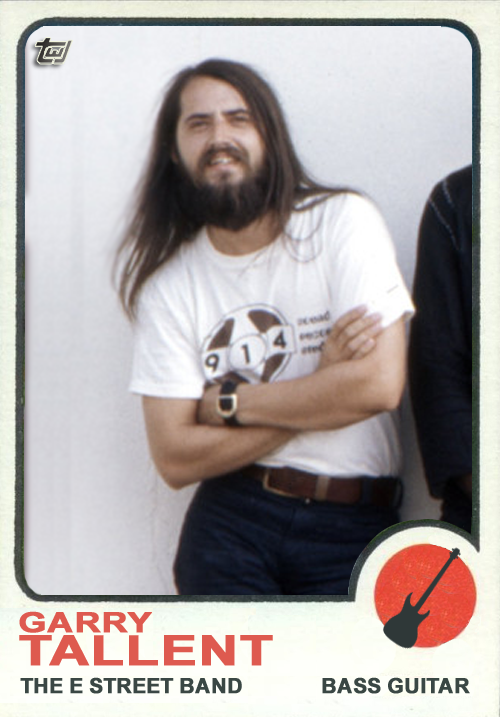 There was a bit of a shakeup in 1975, with three new members of the E Street Band… 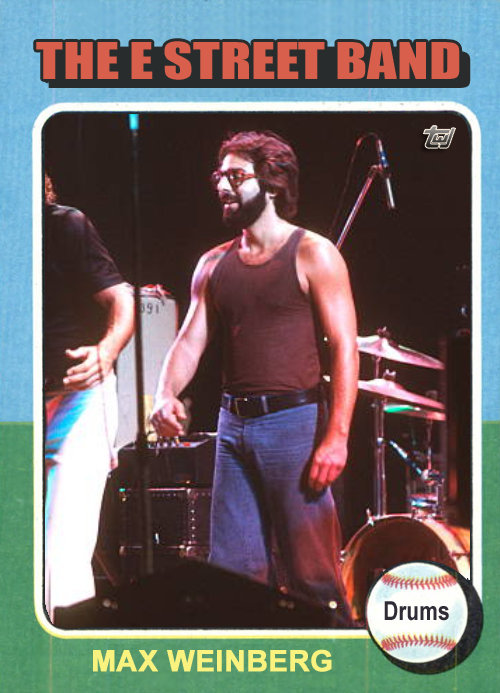 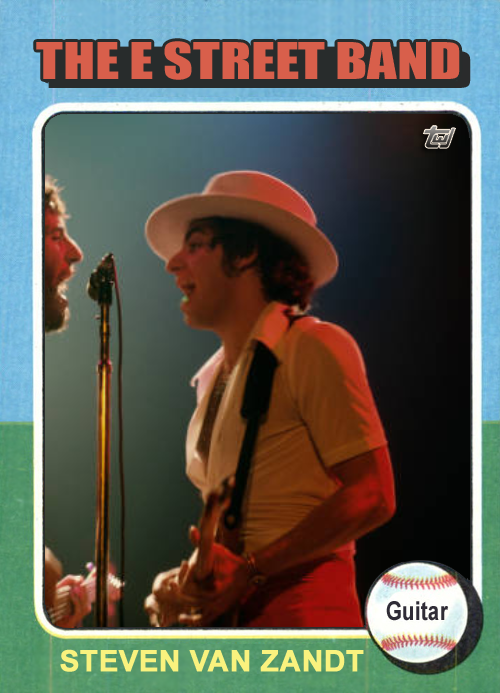 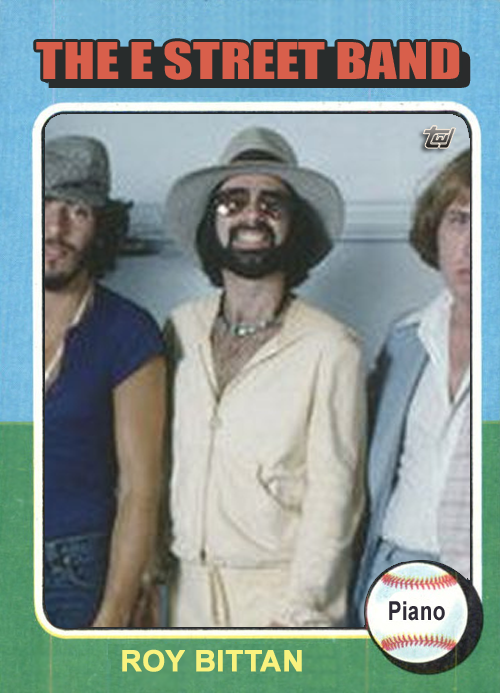 A big addition came in 1984, though his studio debut with the band came a little later… 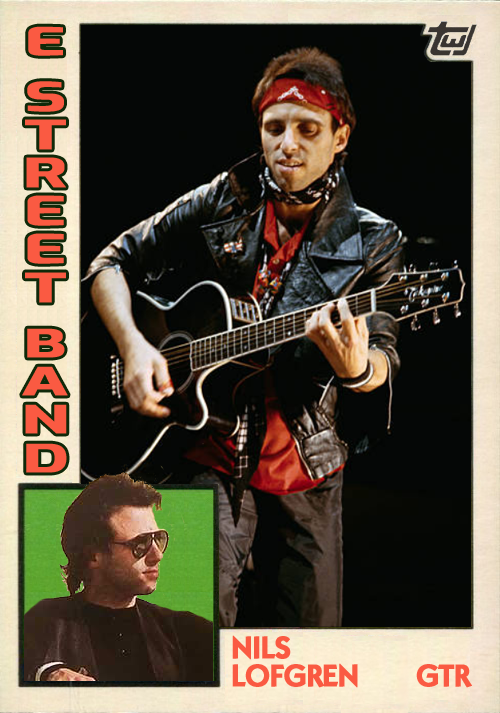 I probably won’t be posting any more before Wednesday, so let me just take a second to say to all readers of The Writer’s Journey, MERRY CHRISTMAS AND THANK YOU FOR READING! 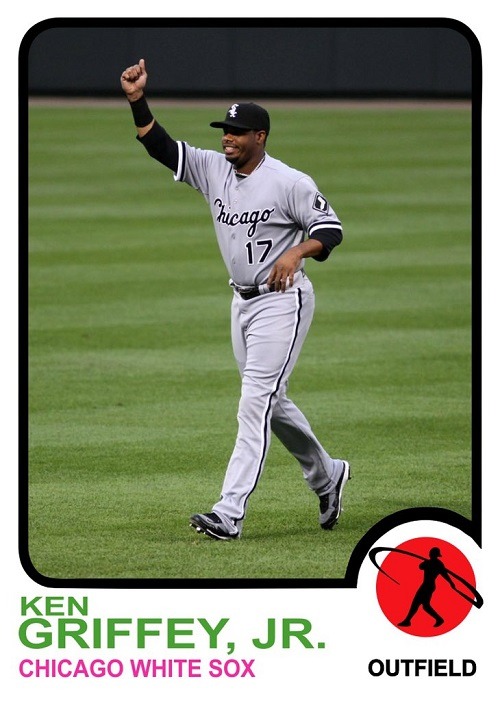 Ken Griffey made his big-league debut for the Reds on August 25, 1973. Ken Griffey Jr. was just a tiny tot at the time, but in sixteen years he would be in the majors too, and eventually got a shoe deal with the “Swingman” logo. I didn’t even notice Lanny’s use of the “Swingman” until he pointed it out to me, but it works perfectly on this design.

Today is April 1st, but I don’t have a joke to tell you. It is also Rusty Staub‘s birthday, and thanks to TWJ contributor Patrick, I have a few “fun cards” to share.

In 1972 and 1973, Staub did not appear in any Topps products due to some sort of disagreement. No base cards, no Traded card to mark his move from Montreal to Queens, nothing. Thanks to the internet and customized baseball cards, fans have plenty of options to print out and slide into their 1972 and 1973 binders. And now, they have three more options.

I’m a bit biased, but I like the cards here a bit more than what is already out there. Thanks for the submission, Patrick, and happy birthday, Rusty Staub!

TWJ contributor Patrick sent over a couple of great “fun cards” over the weekend, but I just haven’t had the time to post them yet. First up is a 1973 Brandon Phillips, using a photo from the series against the Houston Astros when Jonathan Villar slid into his backside at second base.

Next up is a 1974 Jonathan Villar, using that same photo in true Topps form.

Thanks for the “fun cards” Patrick!

Before we get back to the draft pick cards, TWJ contributor Patrick had previously sent over this “fun card” of Todd Frazier using the 1973 Topps “Boyhood Photos of the Stars” design. This concept didn’t last very long…I wonder if there was a backlash from the big leaguers for using photos from their youth? Did Topps have to obtain permission, or did they slide a $20 bill to a family members on the down-low?

Donruss Triple Play set brought the concept back in the 1990s with the “Little Hotshots” subset. The difference with Triple Play is you had to turn the card over to find out who the player was. I didn’t like that very much (and I love the 1992 and 1993 Triple Play sets).

If voting ended today for the All-Star Game, Joey Votto and Brandon Phillips would be starting in the National League infield. Votto has a 1,044,742-513,371 lead over the Giants’ Brandon Belt at first base, while Phillips is leading the Giants’ Marco Scutaro 1,019,240-801,754. Other Reds on the board are Todd Frazier (5th place at third base), Shin-Soo Choo (5th place in the outfield), and Jay Bruce (15th place in the outfield).

Thanks to TWJ contributor Patrick for the above 1973 Topps Brandon Phillips, a tribute both to the best second baseman in the NL and the awful photography of the 1973 Topps set!

Journeyman Richie Scheinblum played for six different teams in his 8-year career, including a brief stint in 1973 with the Cincinnati Reds. Scheinblum had been named to the All-Star team in 1972 as a member of the Kansas City Royals, but was never again invited to the midsummer classic. In that ’72 season, he connected for eight home runs and drove in 66 runners, finishing with a .300 batting average. The Royals capitalized on his stats by trading him to the Reds along with Roger Nelson for Hal McRae and Wayne Simpson.

In 29 games for the Reds in 1973, Scheinblum batted .222 and hit only one home run with eight RBI. The Reds decided to trade him in June that year, sending him to the California Angels for players to be named later. Four days later, those players were named: Terry Wilshusen and Thor Skogan. Neither played a game for the Reds.

Scheinblum’s actual 1972 and 1973 cards show him as a member of the Royals; his 1974 issue pictures him wearing the Halos uniform. A quick Google search did not yield any results for any other Richie Scheinblum Reds custom cards, though there is another Reds connection: his 1968 “Rookie Stars” card pairs him with future Reds manager Lou Piniella.

Thanks to TWJ contributor Patrick for his fine “fun cards.” I enjoy learning about these lesser-known players as I research them for these posts.

TWJ contributor Patrick sent over an alternate vision for Johnny Bench‘s 1973 Topps card, much like Dick Allen Hall of Fame‘s Mike Schmidt Redux series. In fact, Patrick sent over re-envisioned Bench cards for 1968 and 1971 as well…but you’ll have to wait until next week to see them.

Sonny Ruberto played a grand total of 21 major league games, 19 of those as a member of the San Diego Padres in their inaugural season in 1969. In 1972 he appeared in two games for the Cincinnati Reds, but failed to collect a hit (though he did reach base once when he was hit by a pitch). Not surprisingly, Ruberto was not included in the 1973 Topps set. TWJ reader Patrick decided that Ruberto deserved to be immortalized on the 1973 design, and sent over this gem, complete with early 70s style airbrushing.

After doing a little more digging, Patrick discovered a photo of Ruberto actually wearing a Reds uniform and decided to update his card with a legitimate photograph. Behold…

Why the discrepancy with the uniform number, you wonder? Evidently the bottom photograph was taken during spring training at some point during Ruberto’s tenure with the Reds, while Patrick decided to use the actual number Ruberto wore during his two-game stint with the big leaguers in 1972 on the airbrushed version.

Thanks to Patrick’s submission, I learned a little bit about the little-known Ruberto, who served as a minor league manager and coach in the Cardinals system for several years. I also discovered another website that features homemade trading cards: Bobw’s Custom Baseball Cards. Bobw prints his creations and attempts to get them autographed, and had a success with Ruberto back in March 2011.

Thanks again for your contributions, Patrick, and for helping me learn more about the overlooked role players of the past!