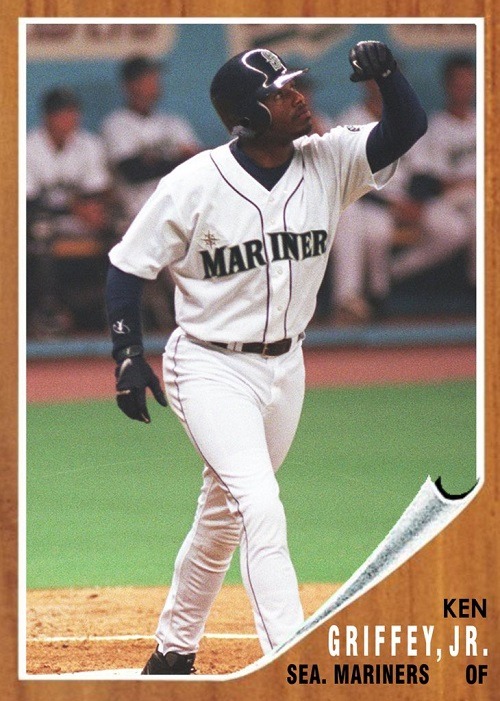 Topps loves the 1987 design so much they used it in 1962! The woodgrain borders are a little darker on the precursor to one of the most overproduced sets in history, and I actually prefer the 1962 version a little better. Lanny Ribes used a fantastic photo of Ken Griffey Jr. in this recreation. Griffey previously appeared on a “Babe Ruth Special” style a few years ago in Topps TBT, but I have never seen a base card version of The Kid on this design.

We are getting very close to seeing Griffey on every Topps design! Thank you Lanny for all the contributions so far! 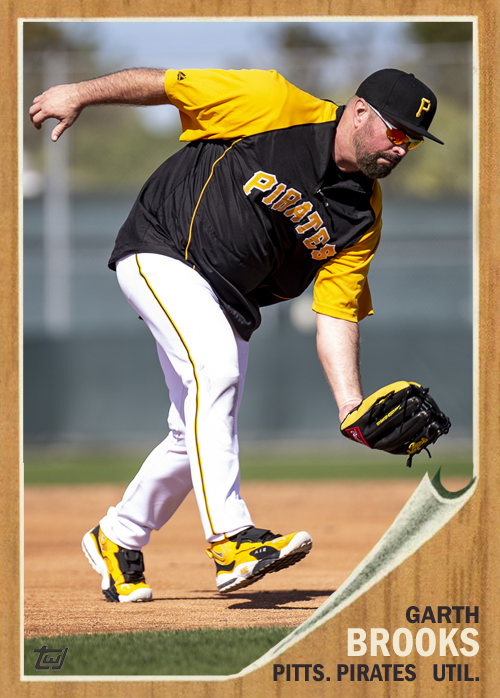 Sometimes you just gotta know when to give up.

Garth Brooks joined the Pittsburgh Pirates this spring after previous failed attempts to make the majors with the San Diego Padres, New York Mets, and Kansas City Royals. While he actually got into a few games with those teams, and collected a hit with the Padres and Royals, he failed to even step up to the plate with the Pirates. Some players have a reputation of “all hit, no glove” or “no hit, all glove.” Brooks is best described as “no hit, no glove.” Not surprisingly, he only lasted a week before the Pirates sent him packing.

I really hope this guy has another talent to fall back on. At 57 years old, the window on a professional baseball career has been slammed shut. I hear McDonald’s is hiring. Or maybe he has a hidden talent like singing; he could audition for American Idol. Luke Bryan would be happy to give him some pointers.

In all seriousness, Brooks’ various appearances have been in conjunction with his “Teammates for Kids Foundation,” which has raised over $100 million for children’s charities. Whether you like his music or not, that’s kinda awesome.

TWJ contributor Patrick asked if I considered making “fun cards” out of the ceremonial first pitch photos I had posted the past couple of weeks. I told him it had crossed my mind, but if he wanted to tackle that project, go for it! He didn’t disappoint, using some of the photos I posted and finding a few others, like Sandy Koufax below.

Today and tomorrow I will post those that I had already shown you, and on Wednesday I will show you some that he dug up that I hadn’t seen yet in my searches. Hit the jump to see the first few.