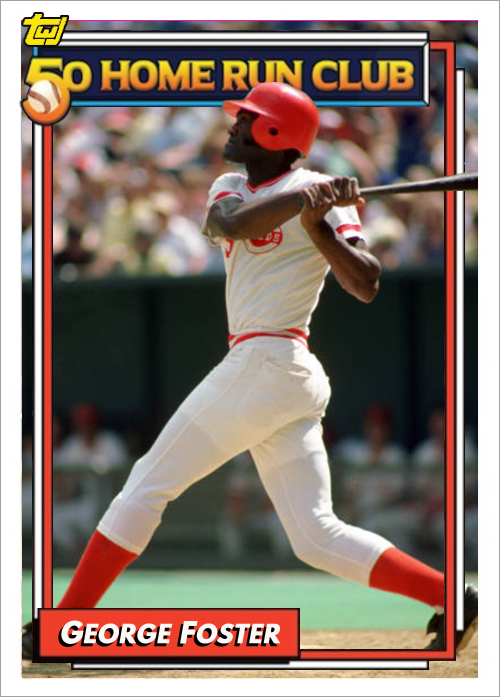 The Topps TBT set last week celebrated the sluggers who smacked fifty home runs in a season. Well, celebrated six of them, and six that are quite often celebrated by Topps. Forget the guys like George Foster here, who was the only player to go yard fifty times in the entire decade of the 1970s. In fact, between Willie Mays‘ 1965 season and Cecil Fielder‘s 1990 campaign, Foster was the only guy with fifty longballs. And did Topps celebrate him? Of course not. He played for the Reds and his name isn’t Johnny Bench, so he was completely ignored.

But the blogosphere rights Topps’ wrongs. We celebrate the underrated, overlooked, and ignored. So hold your head up high, Mr. Foster. Your 1977 MVP season will never be forgotten by this Reds fan.

By the way, Foster is a ridiculously nice guy. I had the pleasure of meeting him several years ago at the Reds Hall of Fame for an autograph signing, but he was interacting with fans and laughing and appeared to truly appreciate the blessings of being a former big leaguer.