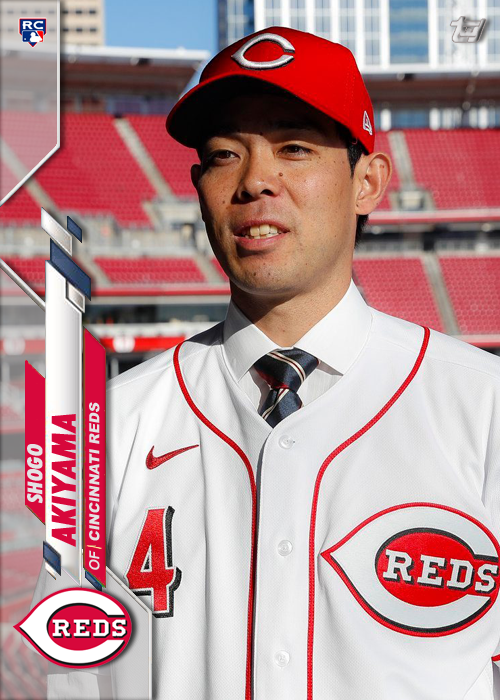 We are three weeks away from the official release of 2020 Topps Series 1! A few images have been posted on Topps’ Twitter page, and I’m liking it more and more (even sans borders).

In a Series 1 kind of Sunday mood… 🤩 pic.twitter.com/ucRfRHho1K

I thought I would take a crack at creating a card for the newest Cincinnatian, Shogo Akiyama. He was a five-time All-Star in Japan and has hit 20 or more home runs in each of the past three seasons for the Saitama Seibu Lions of the Japan Pacific League. Reds Country is excited to see him patrol the outfield at Great American Ballpark!

One interesting dilemma I faced was the placement of the “RC” logo. Topps has not previewed any rookie cards for the new design yet. Will the “RC” be in the gray area, as I chose? Will it be incorporated elsewhere in the design portion on the left side? Or will it intrude upon the photo? I tried it in a few different areas, and I like what I settled on the best. Thus it is quite unlikely I placed it correctly.

Where do you think it should appear? (No, “not at all” is not an option…though that would be my first choice!)