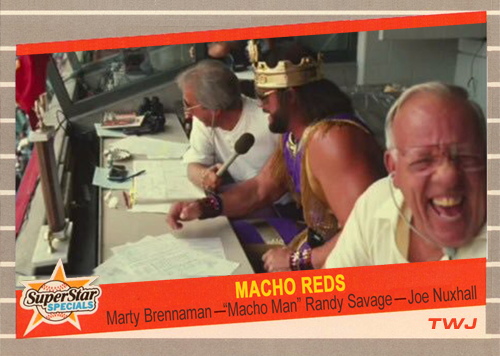 Randy Poffo was once a farmhand in the Cincinnati Reds system, but by the time he showed up at Riverfront Stadium in 1989 he had transformed himself into a wrestling superstar. “Macho Man” Randy Savage visited with Marty Brennaman and Joe Nuxhall in the broadcast booth near the end of the season. Players, fans, and umpires noticed and seemed amused at his presence. One person was not amused, though: Reds owner Marge Schott. She ordered Brennaman to remove Savage from the booth, even threatening his employment.

Brennaman obeyed but did not remain silent about her tactics. Never one to mince his words, Marty later told Schott, “Don’t you ever try to intimidate me again. And if you have something to say to me, say it yourself.”

By the way, I really miss Fleer.