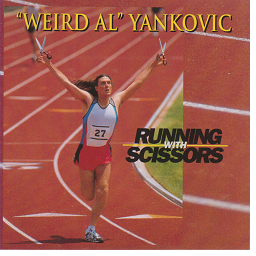 The most enduring song from the album, however, is a parody of Don McLean’s 1971 hit, “American Pie.” Yankovic took the song and transformed it into an ode to George Lucas’ Star Wars Episode I: The Phantom Menace.

In addition to all the parodies, Yankovic shows his chops as a songwriter with six original compositions in various styles. My personal favorite of these is the 11-minute opus “Albuquerque” that closes the album.

I have loved “Weird Al” since I first discovered his music in elementary school, though he has currently stopped performing in concert a couple of the songs that drew me to his brilliance—“Eat It” and “Fat,” both parodies of Michael Jackson hits. He has not decided whether he will retire them permanently or not, but with the renewed scrutiny of Jackson’s alleged indiscretions, Yankovic has decided to remove them from his current repertoire.

Posted on June 29, 2019, in music and tagged June 29, On This Date, Running With Scissors, Weird Al Yankovic. Bookmark the permalink. 3 Comments.