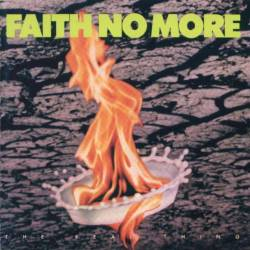 Will you hate me if I say that Faith No More is epically overrated? “Epic” was a pretty good (and pretty overplayed) song from the band’s third album, The Real Thing. I love the piano outro, but the rest of the song (and album) never truly resonated with me. The album, released June 20, 1989, was certified Platinum in September 1990 and peaked at #11 on the Billboard 200 in October 1990.

The Real Thing was nominated for a Grammy for Best Metal Performance in 1990, but lost to Metallica’s “One” (both albums and songs are eligible for such nominations in pop categories). “Epic” was nominated for Best Hard Rock Performance in 1991, but lost to Living Colour’s album Time’s Up. Another song from FNM’s album, “Falling To Pieces,” won the MTV Video Music Award for Best Visual Effects in a Video in 1991.