← It’s tough to keep up with all of Topps’ online exclusive releases
30 Years Ago Today: SRV gets “In Step” →

35 Years Ago Today: The Boss releases “Born in the USA” 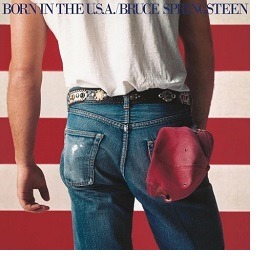 Bruce Springsteen is a force to be reckoned with.

I have to be honest, I didn’t realize how many great (and popular) albums the Boss had released until looking back at his career for this blog entry. Born in the USA, released on this date in 1984, was his fifth of eight straight albums to reach the top ten on the Billboard 200 chart. It was his second of nine #1 albums. It remains one of the best-selling albums in history, certified 15x Platinum in the US. The title track is a sing-along pop anthem that will never go away.

Of the twelve songs on the album, seven made it to the top 10 on Billboard’s Hot 100 chart. At the time, only Michael Jackson’s Thriller record could make the same claim; since then, Janet Jackson’s Rhythm Nation 1814 and Drake’s Scorpion have joined that list.

The first single, “Dancing in the Dark,” is also notable for featuring a pre-Friends, not-yet-famous Courteney Cox in the video.

Posted on June 4, 2019, in music and tagged Born in the USA, Bruce Springsteen, classic rock, June 4, On This Date. Bookmark the permalink. Leave a comment.

← It’s tough to keep up with all of Topps’ online exclusive releases
30 Years Ago Today: SRV gets “In Step” →