← Random Awesomeness (part 2019.10)
It’s tough to keep up with all of Topps’ online exclusive releases → 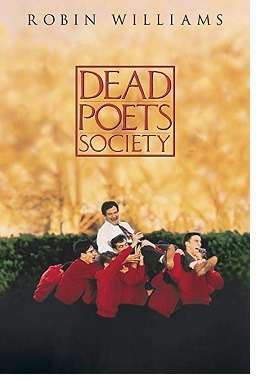 I am certain I did not see Dead Poets Society when it first arrived in theaters in 1989; I probably didn’t see it until more than two years later when I could drive to Blockbuster and rent it on VHS. Maybe I saw an “edited for television” version at some point before then. One thing I can tell you: when I did see Dead Poets Society, the movie had a major impact on me.

I have always been in love with writing. I often put it off and procrastinate and beat myself up for my lack of skills, but I cannot resist the pull of putting words to the page. The words of John Keating, portrayed by the legendary Robin Williams, inspired me as a teenager. I wanted to seize the day. I needed to make my life extraordinary.

Somewhere along the line, though, “real life” got in the way. I gave up on dreams until I stopped dreaming. I walked away from opportunities because of fear of failure and lack of self-confidence. I discouraged myself, despite the encouragement of others all around me.

Now, three decades later, I want to seize the day; I still feel the need to make my life extraordinary. And I still have no idea how to do that.

Posted on June 2, 2019, in movies, writing and tagged Dead Poets Society, June 2, On This Date, Robin Williams. Bookmark the permalink. Leave a comment.

← Random Awesomeness (part 2019.10)
It’s tough to keep up with all of Topps’ online exclusive releases →