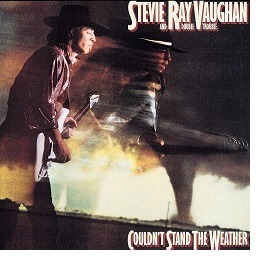 The second studio album from Stevie Ray Vaughan and Double Trouble, Couldn’t Stand The Weather was released on May 15, 1984. The record peaked at #31 on the Billboard 200 chart and the title track’s video received regular airplay on MTV. The group also shot a video for “Cold Shot,” the first song on side two of the album. Vaughan was a huge fan of Jimi Hendrix and included his own version of the Hendrix classic “Voodoo Chile (Slight Return)” on Couldn’t Stand The Weather.

In the early morning hours on Monday, August 27, 1990, following an all-star jam in Wisconsin, Vaughan was tragically killed in a helicopter crash, along with the pilot Jeff Brown, agent Bobby Brooks, bodyguard Nigel Browne, and tour manager Colin Smythe. SRV was only 35 years old.

Posted on May 15, 2019, in music and tagged blues, classic rock, May 15, On This Date, Stevie Ray Vaughan. Bookmark the permalink. 1 Comment.