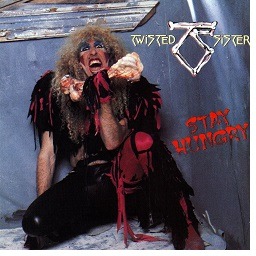 Dee Snider and company were made for MTV, and thanks in large part to the music video channel Stay Hungry became a tremendous success. The multi-platinum album reached #15 on the Billboard 200 charts, featuring the band’s two greatest hits “We’re Not Gonna Take It” and “I Wanna Rock.”

“We’re Not Gonna Take It” entered the Billboard Hot 100 at #80 on July 28, 1984, and peaked at #21 the week of September 22, 1984. The video featured numerous shout-outs to the 1978 John Landis comedy Animal House and starred Mark Metcalf, who played Doug Neidermeyer in the film. Metcalf also starred in the band’s video for “I Wanna Rock,” which included a cameo by Stephen Furst (Kent Dorfman/Flounder).

Twisted Sister re-recorded the entire album in 2004 and released the new production under the title Still Hungry. For my money, the original is better.