May The Fourth Be With You

Star Wars. It’s a cultural phenomenon. Long before the Avengers ruled the silver screen, George Lucas’ space opera captured the hearts and imaginations of moviegoers everywhere in the late 1970s.

I’ve ranked the Star Wars films before, but I’m going to do it again (without referring 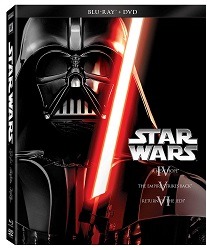 to my previous ranking). Tell me where I’m wrong…

Where will Episode IX: The Rise of Skywalker fit into the saga?

[Ok, I couldn’t resist looking back to see how I ranked them shortly after seeing Solo in theaters. I had ESB above ANH, and Solo came in at #4 because it was new and shiny. In the end, it doesn’t really belong in this list because it has so little to do with the overall saga, but I love it anyway. AOTC actually settled into the last spot. So there have been some slight adjustments over the past year, but nothing really earth-shattering.]

Posted on May 4, 2019, in movies and tagged May The Fourth Be With You, star wars. Bookmark the permalink. Leave a comment.